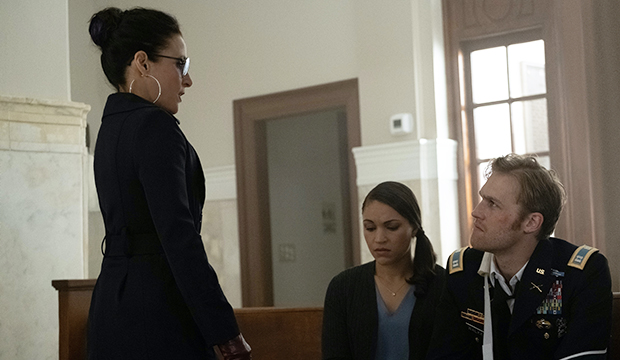 Julia Louis-Dreyfus pleasantly surprised television fans everywhere when she popped up in the popular Disney+ series “The Falcon and The Winter Soldier” earlier this month. Making her Marvel Cinematic Universe debut in the fifth episode as comic book character Contessa Valentina Allegra de Fontaine, she also appeared in the finale. Although Louis-Dreyfus’ time on the show was fairly brief, it hasn’t stopped fans from discussing whether or not she could earn a 12th Emmy for the performance. Naturally, we decided to look at her chances.

In Louis-Dreyfus’ first appearance, she introduces herself and attempts to recruit Wyatt Russell’s John Walker to a mysterious cause after he was dishonorably discharged from military service and stripped of the title of Captain America. In the sixth and final episode of the show, she is around just long enough to give John a new suit and dub him U.S. Agent before reminding him to pick up the phone when she calls. Given how little screen time she had in both appearances, it didn’t seem possible at first that the former “Veep” star would be eligible for an Emmy in limited/TV movie supporting actress. But with the recent news that the series will compete in drama at the upcoming Emmy Awards instead of limited series as originally thought, it seems like the venerated comedy actress could be well on her way to at least another nomination if not a win, this time in the drama guest actress category.

Working in Louis-Dreyfus’ favor are a couple things. First and foremost, she’s a well-known actress who is quite obviously beloved by Emmy voters. She’s won eight acting awards over the course of her lengthy career — it’s an Emmy record that she shares with the late Cloris Leachman for the most ever for a performer. Those eight statuettes speak for themselves, but she also has three as a producer on the HBO satire and three-time Best Comedy Series champ “Veep,” bringing her total haul to 11. Emmy voters are big on name recognition and rubber-stamping, which definitely works in her favor here (though that is not to suggest she didn’t win every single one of those awards on her own merit).

Meanwhile, there’s precedent for voters to nominate and award fan-favorite actresses despite having minimal screen time. Three-time Emmy winner Margo Martindale won her second consecutive Best Drama Guest Actress Emmy in 2016 for “The Americans” after appearing in approximately 90 seconds of her episode submission, and half that time the coverage wasn’t even on her. Cherry Jones, another three-time Emmy winner who took home the Best Drama Guest Actress award in 2019 for her performance in Hulu’s “The Handmaid’s Tale,” was in two scenes in her episode submission and together they added up to being less than 2 minutes and 30 seconds in length. In comparison, Louis-Dreyfus’ first appearance, which would likely be her submission, clocks in around 1 minute and 45 seconds from entrance to exit. Her second was even shorter, around 1 minute and 28 seconds.

With Louis-Dreyfus’ impressive record and immense talent, and with Emmy voting history in mind, it is not out of the realm of possibility to believe she could receive, at the very least, a nomination for guest actress for her appearance on “The Falcon and The Winter Soldier.” Whether or not she could go home a winner is another story that depends on the strength of the other women nominated. But all signs point to that being within reason as well.