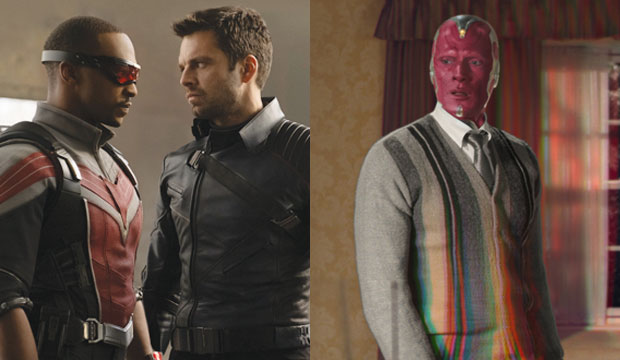 The actor who plays the Hulk in the Marvel Cinematic Universe, Mark Ruffalo, won last year’s Emmy for Best Movie/Limited Actor for “I Know This Much is True,” but this year three Marvel actors could be nominated for their actual Marvel roles: “The Falcon and the Winter Soldier” co-stars Anthony Mackie and Sebastian Stan and “WandaVision” actor Paul Bettany.

“WandaVision” finished airing its episodes already, so audiences have the benefit of knowing Vision’s entire story arc, including Bettany playing several sitcom versions of the synthezoid character, plus two versions of Vision during a climactic battle in the final episode. That showy performance places him third in the category with 6/1 odds, according to the combined predictions of Gold Derby users as of this writing. He’s currently behind front-runner Ethan Hawke (“The Good Lord Bird”) and dark horse Hugh Grant (“The Undoing”).

SEEIt was Kathryn Hahn all along: Early Emmy predictions from Experts say ‘WandaVision’ witch will win

“The Falcon and the Winter Soldier” just started on March 19, so it hasn’t had much time yet to generate buzz. But its actors could rise as the weeks and months progress. Mackie currently ranks 10th, while Stan is 11th; both are 100/1 underdogs. But while superhero stories haven’t gained much traction with Oscar voters — with the rare exceptions of “The Dark Knight” (2008), “Black Panther” (2018) and “Joker” (2019) — last year’s Emmy sweep for “Watchmen” proved that comic book adaptations might be more welcome on the small screen.

And it’s not just superheroes. Sci-fi and fantasy have become a lot more common as nominees and winners at the Emmys in the last 10 years, including “Game of Thrones,” “Westworld,” “Stranger Things,” “American Horror Story,” “Black Mirror,” and “What We Do in the Shadows,” to name a few. Could “Falcon” and “WandaVision” continue that trend?