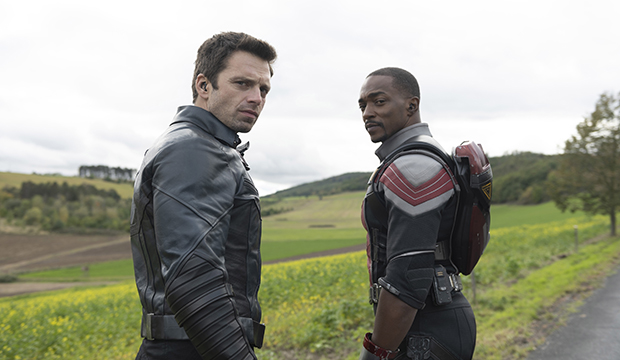 To the relief of Marvel fans everywhere, the second episode of Disney+’s “The Falcon and The Winter Soldier,” titled “The Star-Spangled Man,” wasted no time bringing its two bickering superheroes together after the character-focused premiere kept them apart in order to set the stage for their deeper personal arcs. It also properly established John Walker (Wyatt Russell), a former soldier and the newly appointed Captain America, as a person with his own hangups after introducing him with a wink and a smile at the end of the premiere.

In a scene that feels ripped straight from Amazon’s fantastic anti-superhero show “The Boys,” Walker is seen giving an interview on “Good Morning America” on the grounds of his old high school, complete with a full marching band performance and lots of excited fans asking for autographs and photos. If you’d told me this was real footage from an “Avengers” press tour, I might have believed you. But this is actually just Walker’s latest stop on his own press tour, and the scene, with all its pomp and circumstance, sticks out from the rest of the episode, and it’s meant to.

The government’s direct involvement in choosing Steve Rogers’ (Chris Evans) replacement is a glaring problem. It’s going to cause a lot of headaches for Sam (Anthony Mackie) and Bucky (Sebastian Stan) for a lot of reasons, which we’ll get to in a minute, but given the myriad issues Steve came to have with the government over the course of his nearly 10-year run in the Marvel Cinematic Universe, the treatment of Captain America as a brand feels like a slap in the face to everyone who knew Steve or loved him, especially Bucky, who can’t understand why Sam gave up the shield in the first place.

SEE ‘The Falcon and The Winter Soldier’: Who are the Flag-Smashers?

However, the episode, which was written by Michael Kastelein, does try to humanize Walker a bit, revealing he’s got his own concerns about living up to Steve’s legacy and the mountain of expectations that have been placed upon him by this promotion. To further prove that he’s a good guy, he makes multiple attempts to extend an olive branch to Sam and Bucky, offering to work with them to take down the Flag-Smashers, who have stolen a bunch of medicine and are revealed to be super-soldiers, just like Steve and Bucky, early on in the episode. Both men refuse to work with Walker and his Black sidekick, Lemar (Cle Bennett), aka Battlestar, out of respect for Steve. And because they have no desire to deal with the government and the accompanying rules and red tape. This is probably for the best given that during the episode’s big action sequence — a fight set atop two semis — Walker turns into a bit of a prick and even draws a gun to take down one of the Flag-Smasher assailants, something Steve would never do.

But the Flag-Smashers are not the only super-soldiers to make an appearance in the 50-minute outing. The episode also introduces viewers to Carl Lumbly’s Isaiah Bradley in a particularly moving scene. But who is he? And who was the young man with him?

Who is Isaiah Bradley?

After Sam and Bucky get their respective butts kicked by the Flag-Smashers, who are led by Karli Morgenthau (Erin Kellyman) and whose motive remains a bit murky, Bucky takes Sam to meet Isaiah, a Black super-soldier from the Korean War who had a run-in with the Winter Soldier in 1951 that left Bucky with half a metal arm. He wants to understand how the serum is back in circulation, but Isaiah reveals that after his days as an American hero he was locked up and further experimented on, a not-so-subtle commentary on racism in the American healthcare industry, a topic that is unfortunately very timely given the COVID-19 pandemic.

In the comics, Isaiah is known as the Black Captain America. He is one of 300 Black men who are experimented on during Project Rebirth in an attempt to recreate the super-soldier serum that created Steve Rogers. That his scene is sandwiched between one in which a young Black kid calls Sam the Black Falcon simply because he’s Black and another in which Sam is racially profiled by the police and nearly arrested until they realize he’s an Avenger is further proof that “The Falcon and The Winter Soldier” isn’t playing around when it comes to dissecting the very deep issues surrounding race and racism in America. But there’s something else worth talking about in these scenes too.

Who is Eli Bradley? And why should we care?

Isaiah isn’t the only person we meet in the scene in which Bucky asks Isaiah for help. We’re also subtly introduced to Isiah’s grandson, Eli Bradley (Elijah Richardson), who is known to comic book fans as Patriot, one of the Young Avengers. Between Tommy and Billy in “WandaVision,” Cassie Lang in “Ant-Man” and the upcoming introduction of Kate Bishop (Hailee Steinfeld) in the Disney+ series “Hawkeye,” it seems more and more likely that the Young Avengers are coming to the Marvel Cinematic Universe. Before that can happen though, Sam and Bucky have some sh– to work through.

Why are Sam and Bucky so mad at each other?

Sam and Bucky have always had a bit of an odd-coupleness about them. It’s why fans longed to see them together in a project like this. But the duo were more antagonistic than usual, which made their banter a little less funny in hindsight. And it all boils down to the fact Bucky is unable to understand why Sam would give up Cap’s shield in the first place. In an eye-opening moment at the end of the episode, when the two men are essentially in couples therapy with Bucky’s therapist, Bucky reveals he’s upset with Sam because if Steve was wrong to entrust Sam with the shield and his own legacy, then he might have been wrong about Bucky’s ability to overcome what he did as the Winter Soldier. It’s a great moment, one that promises a lot more of the character-driven storytelling that we witnessed in last week’s “New World Order.” Hopefully the show will be able to merge moments like these with more of the plot next week, especially now that the boys are on their way to see Zemo (Daniel Brühl).