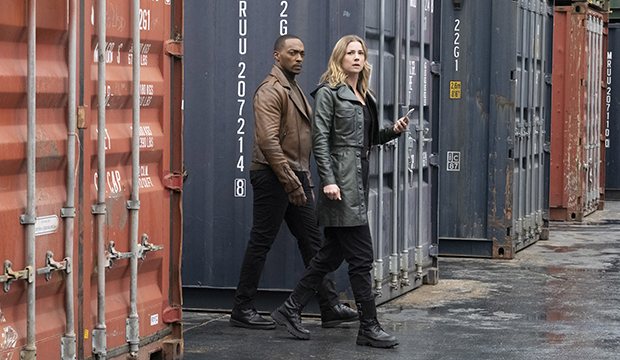 For a show that only has six episodes, “The Falcon and The Winter Soldier” got off to a slow start, but the pace has been steadily picking up ever since Sam (Anthony Mackie) and Bucky (Sebastian Stan) reunited early in the second episode. With this week’s third episode, titled “Power Broker,” the series finally got the adrenaline shot it needed as the duo attempted to figure out who was producing the super-soldier serum and why. In the process, the episode also saw the return of not only Baron Zemo (Daniel Brühl) and Sharon Carter (Emily VanCamp), but also Ayo (Florence Kasumba) of the Dora Milaje. Ayo’s appearance came in a last-second reveal that fans may or may not have seen coming depending on their ability to pay attention to small details.

But let’s back up for a second. The episode, written by “John Wick” (2014) writer Derek Kolstad, opens with Sam and Bucky visiting Zemo in prison in Germany, where he’s been ever since the end of “Captain America: Civil War” (2016). Soon after, Bucky breaks him out (against Sam’s wishes) and the trio head to Madripoor, a lawless cyberpunk-ish island, to meet a woman (Imelda Corcoran) who has the information they’re looking for. But after Sam receives a call from Sarah (Adepero Oduye) in the middle of the meeting, their cover is blown and Sharon has to save them.

Sharon, as we soon learn, has been living in Madripoor because she’s an enemy of the United States after stealing Steve’s (Chris Evans) shield and Sam’s wings in “Civil War.” Bitter and cynical after everything that’s happened to her since, she’s not exactly ecstatic to have to help Sam and Bucky (again), but she agrees to assist them in finding the man who recreated the super-soldier serum, a Dr. Nagel (Olli Haaskivi), in exchange for Sam helping procure her a pardon just like Bucky’s. Nagel, it turns out, was recruited by the CIA after the fall of HYDRA to reverse-engineer the serum using blood samples taken from an American test subject who had traces of the serum in his body, an obvious reference to Isaiah Bradley (Carl Lumbly), the Black super-soldier we met last week. However, Nagel was snapped out of existence before he could finish it, and the program was shut down by the time he returned. But that didn’t stop him: He found his way to Madripoor, where the shady and mysterious Power Broker was more than willing to fund his research to finish the serum.

That the United States and its government is painted in a poor light throughout this episode does not go without notice. It’s been a running theme in the Marvel Cinematic Universe for a while now — especially in films like “Civil War” — but the idea of Captain America himself is also harshly criticized too. As Zemo says, “The danger with people like him, America’s super-soldiers, is we put them on pedestals. They become symbols. Icons. And then we start to forget about their flaws.” Anyone who’s spent any time on the internet in the real world could tell you this, what with the way Steve Rogers has been memorialized like he’s a real American hero, but this revelation also puts Sharon’s current predicament in stark perspective while further highlighting Sam’s inner conflict about stepping up as the next Cap as well. By the end of the episode, he’s not even sure he should have given the shield to the museum, saying he should have destroyed it instead.

This point of view is in direct contrast to Bucky, who still believes in the shield and everything it represents. This isn’t surprising, and not just because his BFF Steve risked his life to save him; the show has been very careful to remind us that Bucky is still very much a man out of time. His age has come up multiple times, while references to reading “The Hobbit” when it first came out and his preference for 1940s music remind us that he’s not like Sam, that he has different opinions and ideas about things because of the life he has lived. He still sees the good in having a symbol like Captain America and the shield he wields. It’s not necessarily a bad thing, and the disagreement between Sam and Bucky provides a strong central conflict that helps Marvel to evolve and move into the next phase.

But Bucky’s advanced age isn’t the only part of his history that comes into play this week. After he sets Zemo’s prison break into motion, Sam reminds him that Zemo killed King T’Chaka (John Kani) of Wakanda, subtly laying the groundwork for Ayo’s appearance at the end of the episode. As much fun as it is to see Zemo toy with Sam and Bucky even as he helps them, it seems very obvious that Wakanda isn’t going to just sit by and let the man walk free. This should create a new wrinkle in the overarching story as Sam and Bucky attempt to use Zemo to track down Karli (Erin Kellyman) and the rest of the Flag-Smashers, who continue to be underdeveloped villains even as Karli loots and then blows up a supply center for the Global Repatriation Council like a modern day Robin Hood.

SEE ‘The Falcon and The Winter Soldier’: Who are the Flag-Smashers?

If there’s one thing that’s unclear halfway through “The Falcon and The Winter Soldier,” it’s who the bad guys are supposed to be, and that feels wholly intentional. As the MCU has evolved, it’s often employed sympathetic villains with complex motives, from Erik Killmonger (Michael B. Jordan) in “Black Panther” (2018) to Thanos (Josh Brolin) himself. What Karli and her team is doing — providing food and medical supplies to people in need — is admirable in a sense, though she’s going about things incorrectly. Hell, even Zemo is sympathetic in a way. Which leaves us with John “Do You Know Who I Am?” Walker (Wyatt Russell) and the U.S. government and the Power Broker.

And speaking of, who is the Power Broker? Who is this person with immense power who is pulling so many strings without ever showing their face? Is it Sharon Carter? She’s got plenty of money. She’s also got a driver/bodyguard, access to lots of people and information and a mysterious agenda. I’m not saying she’s definitely the Power Broker — that would complicate things with Sam and Bucky since the Power Broker funded the completion of the super-soldier serum (unless she simply took over from a previous Power Broker) — but maybe we should all be on alert around her next time? Just saying.