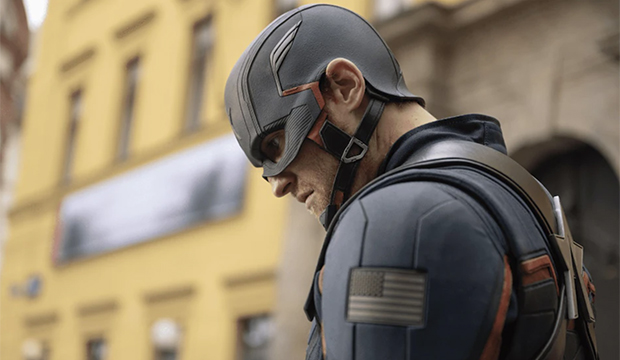 If “The Falcon and The Winter Soldier” has one obvious flaw, it’s that after years of people describing limited series as being like “X-hour movies,” the show actually does feel like someone chopped up a six-hour movie into short installments, slapped credits on the end of each and called it a TV show. The structure of certain episodes doesn’t always support the overarching narrative or work the way a TV show should. Whether or not that is a serious and unforgivable offense is ultimately up to the individual viewer. But this week’s episode, “The Whole World Is Watching,” did feel a little bit more like a contained episode of television, with a bleak ending that will stay with fans for a while.

Most of the episode focuses on Sam (Anthony Mackie), Bucky (Sebastian Stan) and Zemo’s (Daniel Brühl) attempt to track down Karli (Erin Kellyman) and the Flag-Smashers after they blew up a GRC supply depot and killed several people last week. Walker (Wyatt Russell) and Lemar (Cle Bennett) are hot on their tail, letting the trio do the heavy lifting for them. By the end of the hour, though, Zemo has escaped custody, the vials of super-soldier serum have been destroyed, Lemar is dead, and Bucky’s vibranium arm has fallen off during a fight with Ayo (Florence Kasumba) and the rest of the Dora Milaje (he reattached it, don’t worry).

But the image of blood dripping from Captain America’s iconic shield after Walker, now with super-soldier serum running through his veins, killed one of the Flag-Smashers in front of a crowd of people because Karli killed Lemar is an image that people won’t forget any time soon. We’re finally getting to the real meat of the show’s story, digging into what happens when the wrong people are given immense power they’re not equipped to handle or control. It’s a shame there are only two episodes left because this is the most compelling the show has been yet.

At the risk of getting too political, everything about the character of John Walker is obviously meant to represent how people around the world often view the United States. He’s proud and impatient. He rushes into situations with a hot head. He thinks that because he’s wearing the red, white and blue and brandishing an iconic symbol of America that he has carte blanche to do whatever he wants. He thinks he’s always right. What’s particularly interesting about this is that we’ve all been programmed to hate Walker from the start because he’s not Steve Rogers (Chris Evans). He’s a newcomer and an outsider. And it’s the same within the world of the Marvel Cinematic Universe as well, so he’s constantly trying to prove himself as being worthy, proving that he has what it takes to follow in Steve’s footsteps. Being bested by the Dora Milaje, who have no superpowers but are supremely good warriors, pushes him over the edge to take the serum and become a super-soldier himself.

But as Zemo points out, power ultimately corrupts everyone it touches. The one exception has always been Steve, whose strength and courage and idealism were present long before he ever became Cap. “There’s never been another Steve Rogers,” said Zemo at one point in the episode, and now the world has seen how true that is as Walker, the symbol of America and thus the same structure and establishment that Karli is trying so hard to dismantle, killed a man in cold blood.

We knew going into it that “The Falcon and The Winter Soldier” was going to deal with some heavy themes. We’ve seen the show explore trauma through Bucky (the flashback to his time in Wakanda when he was deprogrammed was a nice touch), and this week we got to see Sam put his own skills working with victims of trauma and PTSD to work with Karli. It was a nice callback to what he was doing when we first met him in “Captain America: The Winter Soldier” (2014), which had a similar darkness running through it, especially as it related to Project Insight, which also involved an overstepping of power and our heroes fighting against a broken system.

As we move into the series’ final two episodes, you can see where the show’s loyalties lie as Karli is being made to be more sympathetic even though she has chosen violence as a means to an end. It’s a bit difficult, however, to see how Sam could ever pick up the shield and take on the mantle of Captain America in a broken system such as this, but it’s likely he’s going to try to clean it up from the inside or try to show the world that it doesn’t have to be this way. It’s a tall order, especially with so many loose threads still blowing in the breeze. So once again we have to wonder why this show was only six episodes.