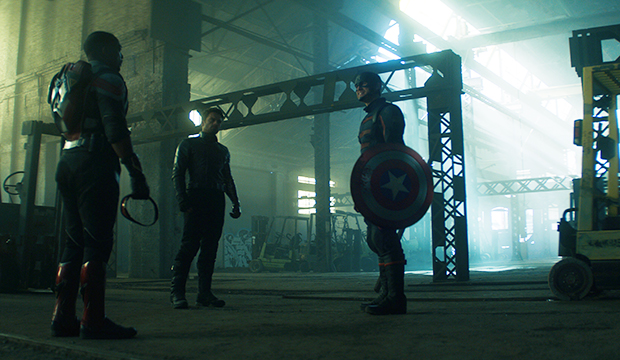 The penultimate episode of “The Falcon and The Winter Soldier” was hyped up like it was, well, a mega-popular Marvel property with the potential to change the trajectory of multiple characters. After John Walker (Wyatt Russell) murdered one of the Flag-Smashers with the Captain America shield last week, it was pretty obvious that this episode, titled “Truth,” would be a turning point for the show. And it was. This episode had it all.

The hour more or less picked up where last week’s left off, opening with a two-on-one fight between Sam (Anthony Mackie), Bucky (Sebastian Stan) and Walker that called back to Steve (Chris Evans) and Bucky fighting Tony Stark (Robert Downey Jr.) at the end of “Captain America: Civil War” (2016). Sam’s wings were destroyed by Walker during the fight, signaling a literal end for the Falcon, but just as Walker was about to use the shield to kill Sam like he’d killed the Flag-Smasher last week (and just like how Steve could have killed Tony but chose not to), Bucky stopped him and saved Sam. Because they’re friends, they just won’t admit it yet.

While Sam took the shield and went to Baltimore to get the full story of what really happened to Isaiah Bradley (Carl Lumbly) — complete with more pointed commentary on what it’s like to be a Black man in America and how little has changed over the years — Bucky, who as Torres (Danny Ramirez) pointed out, had gotten his sleeve back, tracked down Zemo (Daniel Brühl) in Sokovia. Instead of killing him, he turned him over to Ayo (Florence Kasumba) and the Dora Milaje before making one final request of the Wakandans, which he would later give to Sam. (Was it a snazzy new Cap suit? A framed portrait of Bucky and his Wakandan goats? All will be revealed in the finale.)

That might seem like a lot, but it was honestly just the tip of the narrative iceberg. The buddy comedy aspects of the show that have been on the back burner the last few weeks as the show ramped up its more dramatic and plot-centric story were back in full force this week. There was a montage of Sam and Bucky fixing up Sam’s boat in Louisiana; Bucky flirting with Sarah (Adepero Oduye) much to Sam’s annoyance; a scene featuring Sam and Bucky throwing the shield around; a full training montage with Sam that felt like it took some inspiration from “Creed” (2015); and Sam using his experience as a counselor to veterans with PTSD to get Bucky to open up and take his therapy seriously. The last one featured a sweet heart-to-heart between the two in which Bucky apologized to Sam for not understanding what it meant for a white man to ask a Black man to wield the Cap shield, while Sam pointed out it does not matter what Steve or anybody thought about Bucky. “You gotta stop looking to other people to tell you who you are,” Sam told him.

But while Sam and Bucky were busy evolving as characters and building a relationship that will surely power a thousand fanfics, there was some major stuff going on for Walker, who had been stripped of his Captain America title and military rank and discharged without benefits in retirement. It was completely understandable after what happened, but it was also emotionally crushing for a man who had dedicated his life in service to his government and country and done everything they’d asked of him. “You built me!” he screamed at his hearing. If this show were more than six episodes and actually cared to dig beyond surface level, this could have been a decent storyline about the way the U.S. government uses people and then throws them away without a care only to call up the next person to take their place.

Walker is obviously supposed to be a villain here — the mid-credits scene in which he’s seen making his own Captain America shield with the medals he earned as a soldier really drives this point home even as it calls back to a similar moment with Tony — but he is a victim as well. He’s definitely not like Isaiah, who was locked up, experimented on and essentially tortured by his government for “research,” but he is clearly seen as being disposable. None of this will be explored of course. These scenes with Walker mostly felt like a way to introduce the big surprise cameo of the episode: Julia Louis-Dreyfus as Contessa Valentina Allegra de Fontaine. So, who is she?

Word on the street (the street being Vanity Fair) is that Louis-Dreyfus’ mysterious character (who feels only a few steps removed from her “Veep” character Selina Meyer) was supposed to be introduced in “Black Widow.” However, because the pandemic delayed the Scarlett Johansson film by more than a year, she gets to make her big entrance here. And it’s a pretty freaking great entrance. But again, who is she?

In the comics, Valentina was a trained member of S.H.I.E.L.D., even having a relationship with Nick Fury (Samuel L. Jackson) at one time. But it was eventually revealed she was a Russian sleeper agent (which could be what tied her to “Black Widow” originally). She eventually went by the name Madame Hydra, which is a name used by several Marvel characters over the years. In “The Falcon and The Winter Soldier,” the card “Val” handed to Walker’s wife was blank, which is a baller move but also only adds to the intrigue. She is clearly trying to recruit Walker for whatever organization she’s running. Is she the mysterious Power Broker instead of Sharon (Emily VanCamp), who appeared for 30 seconds this week to remind viewers she exists? Is Val trying to build her own team à la Nick Fury and the Avengers? Like Fury, she seems to know quite a lot — she knows Walker took the super-soldier serum, for instance, and she told him not to worry about the shield since it technically doesn’t even belong to the U.S. government. She could be pulling any number of strings at this point.

In the end, Louis-Dreyfus is on screen for maybe two minutes, but the 11-time Emmy winner makes them count. She seems to be setting into motion something big, and it’ll be really fun to see just what Marvel has planned for the character moving forward. The same cannot be said for Karli (Erin Kellyman) and the Flag-Smashers, who finally made their big move against the GRC at the end of the episode. I’m not sure there’s ever been a more boring antagonist in the whole of the MCU. It’ll be a relief to conclude that part of the story in next week’s finale even though it still feels like this show was much too short.

The series finale of “The Falcon and The Winter Soldier” airs Friday, April 23 on Disney+.