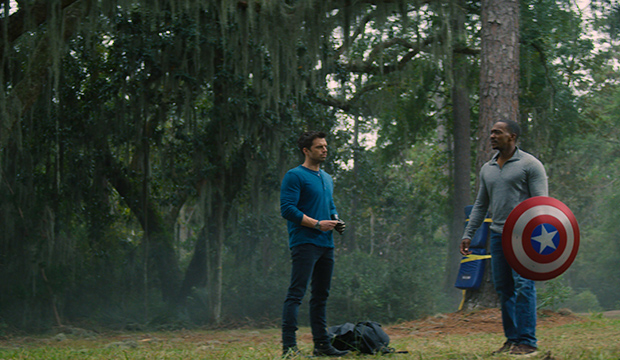 One of the most anticipated shows of the year, Marvel’s “The Falcon and The Winter Soldier” has had its fair share of ups and downs over the course of its relatively short run. But despite some of the narrative and structural hiccups along the way, there is no doubt I have enjoyed spending this time with Sam (Anthony Mackie) and Bucky (Sebastian Stan). The show has delivered several thrilling action and fight sequences on par with the Marvel films, an intriguing dive into the psyche of a former Hydra assassin and contemplative reflections on what it means to be a Black man in America.

As we head into Friday’s series finale of “The Falcon and The Winter Soldier,” which will attempt to wrap up the dynamic duo’s current story and close out the narrative involving Karli (Erin Kellyman) and the Flag-Smashers as well as the threat of John Walker (Wyatt Russell), there are several questions that remain unanswered. Here are nine burning questions we hope to have answered.

1. Why did Bucky rip the sleeve off his jacket?

The true star of “The Falcon and The Winter Soldier” has obviously been Bucky’s excellent outerwear. His coats and jackets have been impeccable to the point that I’m starting to get a complex about it. So why, then, did the 106-year-old super-soldier destroy one of his jackets in the second episode by ripping the sleeve of it like it was a pair of breakaway pants and he was about to shoot some hoops? It’s not as if we didn’t know he had a vibranium arm hidden under there, and it’s not as if said arm didn’t fit under the sleeve since he was already wearing it. I will admit that it was a fine look, and I was glad to see the jacket remained one-sleeved when Bucky donned the getup again in “The Whole World Is Watching” (and even more glad that Torres [Danny Ramirez] remembered The Sleeve Incident in “Truth”), but it still seems like the entire thing was designed just to get me talking about it. Mission accomplished?

2. Will we ever see Zemo again?

As much as I enjoyed “Eurotrip” starring Baron Zemo (Daniel Brühl), Sam and Bucky, the truth is that Zemo ultimately didn’t play much of a role in the overarching narrative of the show. He led them to Madripoor and forced Bucky to pretend to be the Winter Soldier while extolling the virtues of Marvin Gaye and attempting to force the show’s heroes to see the fault in the belief that they could save Karli. But what else did he do? Yes, he made us laugh and he danced. And yes, he had some insight into super-soldiers that spoke to some larger themes about supremacy and power, but the sudden end to his story was also somewhat underwhelming. I understand why he was brought back — I just wish there had been a little bit more meat to his story after everything that happened in “Captain America: Civil War” (2016).

3. How many times has Bucky visited Wakanda post-Blip?

In the fifth episode, after Bucky turned Zemo over to the Dora Milaje, Ayo (Florence Kasumba) told the White Wolf that it would be wise to not go to Wakanda anytime soon. This raises a very important question: Just how many times has Bucky been popping over to the African kingdom since he returned in “Avengers: Endgame” (2019)? The way Ayo said it made it sound like Bucky has a cute little villa outside the city and has been vacationing there with his goats. That seems a bit unlikely since the man barely has any furniture in his NYC apartment.

4. Where is Steve Rogers? And does it even matter?

I have to admit I don’t think much about what happened to Steve (Chris Evans) or what he did after he passed the shield on to Sam in “Endgame.” His story is over. He got his happy ending in the past with Peggy Carter (Hayley Atwell). And Evans has been more than happy to finally put the Marvel Cinematic Universe behind him. But with the many, many references to the character throughout “The Falcon and The Winter Soldier,” and in the wake of that Deadline report that said Evans was signing a deal to return to the MCU for something (“News to me!”), it does seem prudent to ask if we’ll ever find out what exactly happened to Steve.

Sam and Bucky have both said the man formerly known as Cap is “gone” with no further explanation. Bucky felt like the only family he had left was a hunk of metal because of this. So, is Steve dead? Did he travel back to the past? Is he sitting on a couch somewhere, watching “Wheel of Fortune” and making SpaghettiOs? Perhaps more importantly, does it even matter where Steve is at this point? Personally, I don’t think it does because it has no effect on the future of the MCU. But I know there is a large contingent of fans out there who want some answers, and the finale might be our last chance to get some.

5. Will Sharon ever have a non-phone call scene again?

I had hoped that “The Falcon and The Winter Soldier” would undo the damage of “Civil War” by giving Sharon Carter (Emily VanCamp) a more substantial or centralized role in the story. And we did get that… for one episode. In the fourth and fifth episodes, she appeared only briefly to communicate information to Sam or someone else. Her screen time has been next to nothing since kicking butt in Madripoor. With the many fan theories floating around that say she could potentially be the mysterious Power Broker (though I think it’s less likely after the debut of Julia Louis-Dreyfus’ mysterious character), I have to hope she’ll play a larger role in the finale. If not, then the show did exactly the same thing to Sharon, which was to use her to prop up another man’s story and then throw her away.

6. What is Bucky and Yori’s usual Wednesday order?

There are definitely more important questions pertaining to Bucky and Yori’s sweet friendship, like will the older gentleman forgive Bucky when he finds out that Bucky was a Hydra-controlled super-soldier killing machine who murdered his only son when he was in the wrong place at the wrong time all those years ago? But that’s almost too painful to think about, so I’m focusing on this very important question: What do they usually order for lunch on Wednesdays? And why didn’t they get it in the series premiere?

It seems quite likely that the box that Bucky gave to Sam in “Truth” contains a snazzy new Captain America suit straight out of Wakanda. But the question still deserves to be asked. After all, how else would I work in this GIF?

8. How will Isaiah react to Sam taking up the Cap mantle?

After everything that was done to him, Isaiah Bradley (Carl Lumbly) is rightfully distrustful of and adamantly against everything to do with the U.S. government and doesn’t think Sam should ever take up the mantle of Captain America. In all truth, very little has changed in this country since Isaiah was injected with the super-soldier serum, locked up and experimented on, so I’m very curious to see how he will react to Sam embracing the role of Captain America.

9. Will there be a second season?

Unlike “WandaVision,” which featured a close-ended and unique story that led directly into a feature film (next year’s “Doctor Strange in the Multiverse of Madness”), there is no reason (yet) that Sam and Bucky can’t return for a second season in their own show (especially now that the show is being submitted in the drama category at the Emmys). In February, Marvel Studios head Kevin Feige said that certain Marvel series will return for future seasons but did not specify which ones or when. The buddy dynamic at the center of “The Falcon and The Winter Soldier” is easy to replicate in another storyline. However, it does seem unlikely that Sam and Bucky would return for a show titled “The Falcon and The Winter Soldier” given that Sam has now bid goodbye to the Falcon and picked up Cap’s iconic shield. So any potential future seasons of a show featuring Sam and Bucky would probably have to be called something else. “Captain America and White Wolf,” anybody? I’ll keep workshopping it.

The finale of “The Falcon and The Winter Soldier” will be released Friday, April 23 on Disney+.