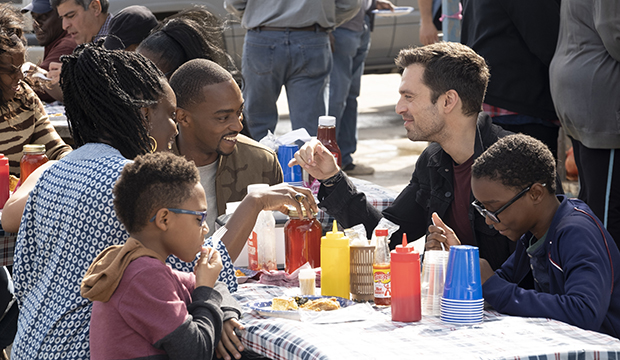 Kevin Feige said earlier this year that Marvel was developing some of its Disney+ shows to run for multiple seasons, and although the news earlier this week that Marvel was submitting “The Falcon and The Winter Soldier” in drama at the Emmys already hinted at additional seasons for the Sam (Anthony Mackie) and Bucky (Sebastian Stan) comedy hour, the finale more or less confirmed it. In “One World, One People,” the writers revealed the identity of the dangerous Power Broker, but also set the stage for the duo’s next adventure, with John Walker (Wyatt Russell) taking up his comic book alter ego of U.S. Agent. But that’s only scratching the surface of what went down this week.

The episode opens where the previous hour left off, with Karli (Erin Kellyman) and the rest of the Flag-Smashers attacking the GRC summit. They intend to take everyone hostage in order to force them to stop moving ahead with their forced resettlements. Needless to say, Sam busts in with his snazzy new Wakandan-made Captain America suit, complete with a new version of Redwing and the shield. Coco Chanel might have suggested he leave one accessory at home, but that would have defeated one of the primary objectives of the show, which was for Sam to finally accept the mantle of Captain America. It is a big moment for the character and a big costume reveal, but there isn’t much time to enjoy it as Batroc (Georges St-Pierre) has a bone to pick with Sam after what went down in the series premiere.

While Sam is busy fighting off an angry Frenchman, Bucky goes after the Flag-Smashers, who have plenty of inside help and are able to take everyone hostage without much trouble. This leads to a bunch of extended action sequences and hand-to-hand fight scenes, as well as a chase that feels somewhat reminiscent of the chase in “Captain America: Civil War” (2016) but is less cool, in my opinion. With a little help from Walker, who has a score to settle with Karli (and whose homemade shield actually holds up pretty well), most of the Flag-Smashers are dispatched and the hostages saved. Meanwhile, Sam confronts Karli, who is ultimately shot and killed by a wounded Sharon (Emily VanCamp) after Sam refuses to fight her back.

Afterward, Sam makes a somewhat ham-fisted speech to the GRC members about how what they’re doing is wrong and how they should be more conscientious of how they wield their immense power. It’s all televised because for some reason this is going down in the middle of the street with press everywhere, which means Isaiah Bradley (Carl Lumbly) has a front-row seat to the entire thing. Later, Sam visits the older man at home and talks about his decision to don the Stars and Stripes before taking Isaiah to the Smithsonian, which now is not just a shrine to Steve Rogers (Chris Evans) but also includes an exhibit on the first Black super-soldier in American history.

Which brings us to Sharon, who as most viewers correctly predicted, is revealed to be the mysterious Power Broker. Everyone loves a good heel turn — comic books probably would not exist without them — and it’s sort of easy to see how Sharon ended up on this path after the way she was treated by the U.S. government after the events of “Civil War.” But it also sort of feels like someone at Marvel HQ recently binged “Revenge” and was like “Let’s do that but make it Marvel.” And now that she’s been fully pardoned and given a position in her old division, it opens up a lot of possibilities for a potential second season of “The Falcon and The Winter Soldier.” Sorry, I mean “Captain America and The Winter Soldier,” which is not going to be confusing at all, Marvel. Definitely not.

But Sharon having an ulterior motive and using her access to classified information to do shady business dealings as the Power Broker is only one of the ways the series seems to be setting up a second season. After Walker assists Bucky in taking down the Flag-Smashers and saving the hostages (because vengeance isn’t healthy, folks!), Contessa Valentina Allegra de Fontaine (Julia Louis-Dreyfus) gives him a new costume (it’s the same as the one he already had but black) and christens him U.S. Agent.

In the comics, Walker becomes Captain America after Steve. But he begins to crack under the pressure, with the murder of his parents ultimately sending him into a rage. He disappears for a bit before returning later as U.S. Agent and joining the West Coast Avengers, though they don’t really love him over there. His backstory honestly lines up quite well with what has been depicted in “The Falcon and The Winter Soldier” thus far. His costume even matches the new one that Val has given him. But we still don’t know what she wants.

It’s been confirmed by Marvel that Valentina is a Nick Fury-esque character (with Bucky-level taste in outerwear). She’s recruited Walker to her team, and with Sharon being positioned as the series’ next big villain — which should make things interesting for Sam and Bucky when they return — it leaves the door open for Val’s objectives to be more ambiguous. So whether or not Walker ends up being a good guy or a bad guy is up in the air. She could very well be putting together The Thunderbolts, which is a group of reformed criminals and villains. And if she is, it might mean we also haven’t seen the last of Baron Zemo (Daniel Brühl), who is now aboard the Raft. But in order to make any of that happen, Marvel will need to renew the show.

Will there be a Season 2 of “The Falcon and The Winter Soldier”?

It seems fairly obvious at this point that Sam and Bucky, who has finished making amends with everyone in his book, including Yori (Ken Takemoto), who is now, sadly, lunching without him, will be back for more, whether that is on television or in a movie. My bet is on TV. It’s really just a matter of when Marvel can make it happen. Between all of the other new Disney+ shows and the slate of upcoming films, which includes “Shang-Chi and the Legend of the Ten Rings, “Eternals,” “Doctor Strange in the Multiverse of Madness” and the third and final “Spider-Man” film, Marvel is rather busy. So it might be a while before we see Sam and Bucky return in what we can all assume will be called “Captain America and The Winter Soldier.” But I do hope it’s sooner rather than later, because their friendship has been one of the best things to come out of the MCU.