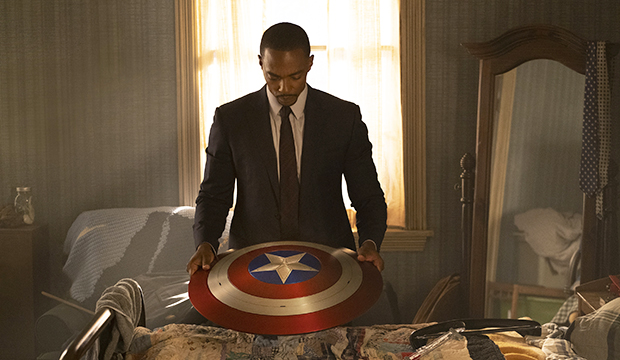 “The Falcon and The Winter Soldier” was in an odd place before its long-awaited debut on Friday. The action-heavy drama series starring Anthony Mackie and Sebastian Stan as their Marvel characters Sam Wilson and Bucky Barnes, respectively, would have been the perfect bridge between Marvel’s popular superhero films and its new limited series on Disney+. With a similar tone and familiar global narrative, it felt like a quintessential Marvel property, one that was proof that its crowd-pleasing big-screen adventures could be adapted for the small screen without losing anything during the transition to episodic storytelling.

But once the six-episode series was delayed by the COVID-19 pandemic and the high-concept “WandaVision” took its place, expectations for “The Falcon and The Winter Soldier” shifted. Critics and fans alike wondered if the show, which was created by Malcolm Spellman, would be able to compete with the emotional, heartbreaking story at the heart of Marvel’s first Disney+ series. And now that it’s here, it’s more obvious than ever that we’re dealing with two entirely different beasts and it isn’t really fair to compare them except to say both succeed at digging into some of the Marvel Cinematic Universe’s best supporting characters.

“The Falcon and The Winter Soldier” is set six months after the events of “Avengers: Endgame” (2019), which saw everyone who’d been snapped out of existence by Thanos (Josh Brolin) in “Avengers: Infinity War” (2018) return to a world that had been fundamentally changed in the five years they were gone. Sam, aka the Falcon, is once again working with the United States Air Force, flying dangerous rescue missions overseas for reasons that are somewhat unclear, while Captain America’s (Chris Evans) iconic vibranium shield and the knowledge that it now belongs to him weigh heavily on his mind. Upon returning to the States, Sam makes the decision to give the shield to the Smithsonian so it can join the rest of Steve’s memorabilia in the museum exhibit dedicated to the symbol of American courage and strength.

Sam then heads home to Louisiana, at which point we meet his sister, Sarah (Adepero Oduye), who has been struggling to keep the family’s seafood business alive in Sam’s absence. And that doesn’t just mean during the Blip but extends to include his time in the military as a pararescueman, since it appears he left home the first chance that he could. This is the first time we’ve learned anything about Sam’s backstory outside of his military service and his work with Veterans Affairs. Much like how “WandaVision” dug into Wanda and Vision as people, it seems “The Falcon and The Winter Soldier” is going to do the same for its co-leads too.

While Sam is saving lives overseas and attempting to save the family business, Bucky, having been deprogrammed by Shuri (Letitia Wright) in between the events of “Captain America: Civil War” (2016) and “Black Panther” (2018), is now attempting to deal with the lingering trauma of having been a brainwashed killing machine who was cryogenically frozen between missions and thus is the hunkiest 106-year-old World War II veteran you’ve seen since, well, Steve Rogers. He’s now in mandated therapy — it’s one of the conditions of his pardon — though he doesn’t appear to be processing or working through his issues so much as ignoring all of Sam’s texts, having nightmares about an innocent young man he killed during a mission and befriending said man’s father, Yori (Ken Takemoto), who has never gotten over his son’s inexplicable death.

Unfortunately, by the end of the episode, Sam and Bucky still haven’t been reunited, so the episode is devoid of the duo’s signature banter (and the reason most fans have probably tuned in). The premiere is mostly used to set up the show’s overarching global narrative and check in with Sam and Bucky and what they’ve been up to since returning from the Blip. We also learn, thanks to some handy exposition from a young soldier named Torres (Danny Ramirez), whom Sam meets during one of his missions, that a terrorist group known as the Flag-Smashers is causing all sorts of trouble. But who are they and what do they want?

Who are the Flag-Smashers?

The Flag-Smashers, led by Erin Kellyman’s masked soldier, appear to have super-strength, much like Bucky (and Steve). According to Torres, who has been secretly monitoring the group’s online activity and eventually follows them to a meetup where he gets attacked, the group believes that the world was actually better during the Blip. They want a world that is united without borders.

In the comics, Flag-Smasher was an anti-patriotic villain who hated Captain America and everything the character represented. It appears the writers have taken this one person’s personality and sensibility and extrapolated it to build out an entire terrorist organization that was radicalized on the internet, giving the series a timely storyline.

But where did they get their super-strength from? And do they also hate Captain America? Because if so, they’re going to have a bone to pick with John Walker (Wyatt Russell), who is introduced at the end of the episode as the new Cap, complete with the shield that Sam had handed over to the Smithsonian earlier in the episode. It’s going to be interesting to see how Sam reacts to this news. Hopefully it will be to meet up with Bucky, because while we enjoyed getting this peek into the characters’ personal lives, the show is only going to get better when they’re together.