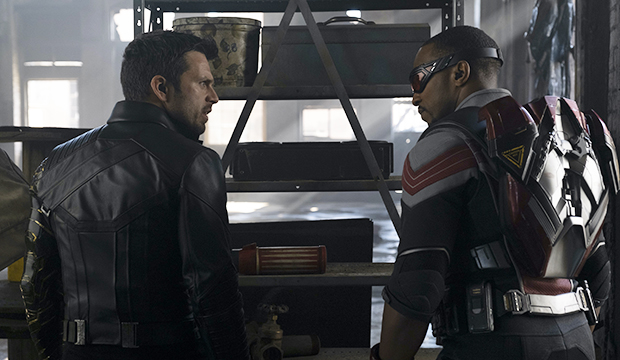 It should go without saying that “The Falcon and The Winter Soldier,” which premieres on Disney+ on Friday (March 19), is going to be different from “WandaVision.” That recently concluded Marvel series used a classic sitcom format to explore the depth of Wanda’s (Elizabeth Olsen) grief in the wake of multiple traumatic events.

One of the biggest differences is that the six-episode “The Falcon and The Winter Soldier” is a straight-forward action drama, one that is much closer in narrative, tone and style to many of the films that now make up the Marvel Cinematic Universe. The series finds Anthony Mackie and Sebastian Stan reprising their respective fan-favorite roles of Sam Wilson, aka Falcon, and Bucky Barnes, aka the Winter Soldier, for a new global adventure.

But even if the show features more of Marvel’s signature action, there are still some similarities to “WandaVision.” For instance, with its extended running time — episodes will clock in between 45 minutes and an hour — the show has more than enough time to explore Sam and Bucky in ways the films never could. We’ll see how their experiences, shared or otherwise, have shaped them into who they are today, and how they’re moving on after bidding goodbye to their mutual friend, Steve Rogers (Chris Evans), in “Avengers: Endgame” (2019).

To preview the series, the creative talent behind the show took part in a global press conference on Sunday. Joining Mackie and Stan were Marvel boss Kevin Feige, series creator and head writer Malcolm Spellman, and the director of all six episodes, Kari Skogland. Here are seven things we learned about what to expect from “The Falcon and The Winter Soldier,” including whether or not we can expect a Season 2.

1. The events of “Avengers: Endgame” and what happened during the Blip will play a major role in the show’s narrative

As most fans know, “The Falcon and The Winter Soldier” was supposed to be the first Marvel series to debut on Disney+ but was delayed because of the COVID-19 pandemic. It should come as no surprise then that the events of the series are directly related to the events of “Avengers: Endgame.” And we’re not just talking about Steve passing the Captain American shield to Sam. “Dispatching Thanos [Josh Brolin] has created a situation where the entire world is dealing with one single issue, which is very familiar with what’s going on today,” Spellman teased during the press conference. “Everything is born from that. The villains in the series are responding to that.”

Although he wouldn’t say exactly what their response entailed or what they even wanted, Spellman did say that every villain in the series would tell you that he or she was a hero, which lines up with what we’ve seen before in the MCU.

2. Sam is hesitant to take on the Captain America mantle because he was also a big fan of Steve

In between the high-octane action and the global mission that reunites Sam and Bucky, the series will explore both characters’ emotional states and dig into their personal struggles. For Sam, that means exploring who he is after the Blip and whether he believes he can be the next Captain America. But according to Mackie, it’s not that Sam doesn’t think he’s good enough to take up the Cap shield; it’s more that he misses the man who used to carry it. “[Sam] went on this Avenger journey over six movies with Steve because of his respect and admiration for Steve,” Mackie explained. “He says when Captain America shows up at your door, you answer. … It’s the pain, the idea of not being able to go on these missions, not being able to help his friend [that is holding Sam back.]”

This also explains why when Sam took the shield at the end of “Endgame” he said it felt like it belonged to somebody else. “He was a fan just like everyone else,” said Mackie, “because Sam Wilson, for all intents and purposes, is a regular guy that just won the lottery.”

3. Sam and Bucky’s relationship picks up right where we left it

When asked about how Sam and Bucky’s odd-couple relationship has evolved since we last saw them interact onscreen, Stan revealed it hasn’t changed all that much. If anything, he said, the two men have only become more divided. That being said, when the show picks up, the two men will be facing similar issues because of their missing mutual friend. “It’s sort of thrown them both into almost opposite corners in terms of facing their lives, their demons,” said Stan. “They’ve got different things that they’re facing, but they’re definitely in similar places in terms of [the] questions they’re asking.”

4. There will be surprise appearances from Marvel characters throughout the series

Don Cheadle has already revealed that he will appear in “The Falcon and The Winter Soldier” as Rhodey, aka War Machine, but when asked if fans can expect to see more familiar faces pop up in the show, Mackie revealed “there are many surprises” to come. Of course, he wouldn’t say who they were, but he did note that they were “pleasant surprises.”

5. The show will deal with both characters’ legacies as Marvel heads into a new chapter

When asked about how Bucky and Sam are approaching the fact they’re the veteran Avengers now, Stan revealed that is essentially the crux of the series. “[That] is very much built into the arc of both of these characters, where they are at the top of the show, and actually answering that question and exploring that question is very much their journey throughout the show,” he said. “You know, who am I now? What do I have to contribute? That guy did this and this, so what is going to be my legacy? If I even want that. There’s all these pieces to it that are interesting rather than just coming off out of the gate and saying I’ve got all the answers.”

6. There are possible ideas for a second season

Feige revealed in February that some of Marvel’s upcoming TV shows are being developed with multiple seasons in mind, but when the question of a potential second season of “The Falcon and The Winter Soldier” came up during the press conference, he was predictably evasive.

“We really did approach it like we do the movies, which is we better make this great or we won’t be able to do another one,” he said. “If we were able to do another one, there’s certainly ideas. The slight difference of course is, as you’ve all heard me say –and I think it’s becoming clear with ‘WandaVision’ — is [the characters] will go back and forth between Disney+ series and the Marvel Studios features. So where characters show up and how sometimes will be in a direct Season 2 and sometimes will be in a feature and then into an additional season. We’re just not gonna say who does what right this second.”

7. Mackie wants to be in the new “Blade” movie

This has nothing to do with “The Falcon and The Winter Soldier,” but Mackie made a point to tell Feige during the press conference that he wanted to have one line in either “She-Hulk” or “Blade,” and now we will be upset if he doesn’t appear in either production.