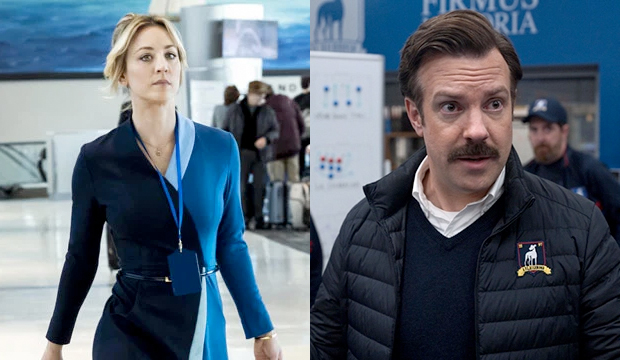 Apple’s “Ted Lasso” is the early front-runner to win the Emmy for Best Comedy Series, according to exclusive Gold Derby odds. The feel-good comedy has already won the Critics Choice Award in this top category, with Jason Sudeikis and Hannah Waddingham claiming acting trophies with that group and Sudeikis taking home the Golden Globe. However, the race isn’t a done deal just yet, especially with HBO Max’s “The Flight Attendant” flying hot on its wings. What will win?

There’s nothing Emmy voters love more than rewarding first-year comedies, and both of these contenders fit that bill this year. “Ted Lasso” streamed last August-October on Apple TV Plus, while “The Flight Attendant” aired on HBO Max from November-December. Both shows are hoping to join a long line of freshman Best Comedy Series champs that prevailed for their first seasons, including “The Marvelous Mrs. Maisel” in 2018, “Modern Family” in 2010 and “30 Rock” in 2007 — see the complete list below.

“Ted Lasso” showrunner Bill Lawrence developed the laffer with Sudeikis, Brendan Hunt and Joe Kelly. The character of Ted Lasso, an American football coach who travels to England to coach soccer, was adapted from a collection of commercials Sudeikis did for NBC Sports in 2013. The streaming service has savvily scheduled Season 2 to air on July 23, shortly after Emmy nominations will be announced on July 13. That means when final voting kicks off on August 19, it’ll be top of mind as voters will be midway through the new episodes.

Conversely, the second season of “The Flight Attendant” hasn’t even begun production yet and likely won’t debut until the second half of 2022. That means it won’t get a similar “Season 2 bump” from Emmy voters. Based on the 2018 novel by Chris Bohjalian, “The Flight Attendant” was developed by Steve Yockey and stars Kaley Cuoco as an alcoholic airline employee who finds herself involved in a transatlantic murder investigation. Cuoco was nominated for major acting awards this past season, but lost them all to Catherine O’Hara (“Schitt’s Creek”). The good news for Cuoco? O’Hara won’t be competition at the Emmys as her show has left the airwaves.

Other shows hoping to win Best Comedy Series for 2021 include “The Kominsky Method,” “Pen15,” “Black-ish,” “Zoey’s Extraordinary Playlist,” “Master of None” and “Cobra Kai.” See more Emmy odds and rankings.

SEE‘The Mosquito Coast’: Heads up ‘The Leftovers’ fans, Apple is bringing Justin Theroux back to TV

Here’s the complete list of every show that won the Best Comedy Series Emmy for Season 1: