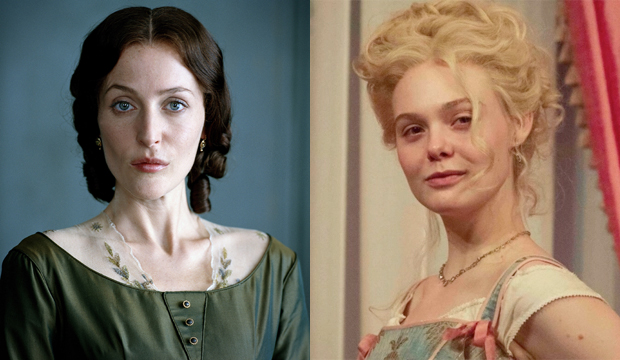 Gillian Anderson is no stranger to period dramas. She was Emmy-nominated for Charles Dickens‘ “Bleak House” (above-left) and she just won the Golden Globe, Critics Choice and SAG Awards for playing UK Prime Minister Margaret Thatcher on “The Crown.” Well, Anderson is about to add a period comedy to her filmography as the newest “The Great” cast member, joining the Hulu series as the mother of Elle Fanning‘s Catherine the Great when Season 2 debuts at a future airdate.

Anderson will appear in two episodes of the regal satirical comedy as Joanna, who comes to the castle after she learns about Catherine’s coup attempt. Here is how Hulu describes the character: “Joanna is a glamorous socialite from Germany, sometimes also known as the ‘maestro of marriage’ for her abilities to arrange high profile partnerships for her daughters. She has heard rumors of her daughter’s coup and come to Russia to see it for herself. Though the apple of Catherine’s eye and a doting mother, it soon becomes clear Johanna has more sinister intentions to save her family’s reputation.”

Hmm, Gillian Anderson is playing a sinister socialite? Count. Us. In.

Back in February, Fanning released an image of her character on Instagram looking positively glowing. “Cooking up something special for Season 2,” she teased about her pregnant Empress character. Hulu followed up her pic with a caption of their own that read, “In season two, Catherine becomes both a mother to Russia and a child.” But who’s the baby daddy: Nicholas Hoult‘s Peter III of Russia (her husband), Sebastian De Souza‘s Leo Voronsky (her lover)? Perhaps Anderson’s Joanna will help us figure out the mystery.

There’s still no official word on when the second season will air, as it was delayed due to the Covid-19 pandemic. The first season from showrunner Tony McNamara (“The Favourite”) streamed all 10 episodes on May 15, 2020. Season 1 followed Catherine’s ruthless attempts to gain power in Russia by manipulating her dimwitted Emperor husband.

Before she appears on “The Great,” Anderson will first enter the Emmy derby for “The Crown.” She’s expected to win the Best Drama Supporting Actress prize for her role as the British PM, just as she won trophies at the Globes, Critics Choice and SAG. Her likely Emmy co-nominees include the following ladies: Helena Bonham Carter (“The Crown”), Wunmi Mosaku (“Lovecraft Country”), Ann Dowd (“The Handmaid’s Tale”), Samira Wiley (“The Handmaid’s Tale”), Yvonne Strahovski (“The Handmaid’s Tale”), Cynthia Nixon (“Ratched”) and Tatiana Maslany (“Perry Mason”).