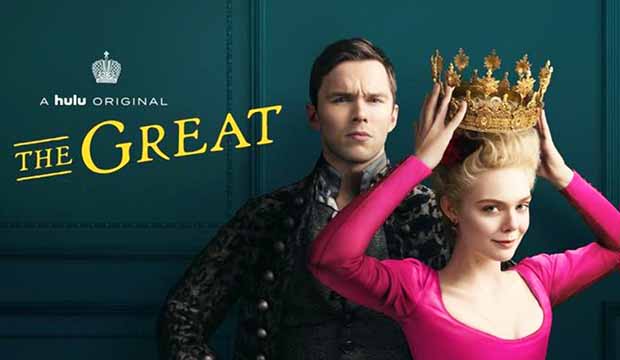 One of the best TV shows of 2020 was Hulu’s “The Great,” a period series that tells the semi-true story of Catherine the Great (Elle Fanning) and Emperor Peter (Nicholas Hoult). Equal parts laugh-out-loud comedy and riveting drama, “The Great” was recognized at the Emmys in Best Comedy Directing and Best Comedy Writing; it lost both to “Schitt’s Creek” as part of an unprecedented sweep. However, the regal show has a great shot at awards redemption at the upcoming Golden Globes, according to Gold Derby odds. And if it ends up winning the top prize of Best Comedy Series, it’d be a first for Hulu.

The streaming network so far has one series win under its belt: Best Drama Series for “The Handmaid’s Tale” in 2017. Over on the comedy side, “Casual” is the only show to earn a nomination for Best Comedy Series, but that was way back in 2015. Isn’t it time for the Hollywood Foreign Press Association to recognize another Hulu show? Gold Derby predicts “The Great” will be nominated, plus “Schitt’s Creek,” “Ted Lasso,” “What We Do in the Shadows” and fellow Hulu hit “Ramy.”

As Catherine the Great, the Empress of Russia, Fanning shows off her range by playing one of the most unconventional characters on television. Whether she’s weeping in a corner, laughing at her dimwitted husband Emperor Peter, or plotting to take power from the Russian regime, this kind of character was tailor-made for awards. Case in point: Olivia Colman won an Oscar for portraying a heightened royal figure in “The Favourite,” which just so happened to be written by Tony McNamara, showrunner for “The Great.”

“The Great” bills itself as an “occasional” true story that straddles the line between history and fantasy. There’s nothing HFPA members love more than when actors portray real people. Just look at last year’s roster of Globe champs: Colman as Queen Elizabeth II (“The Crown”), Russell Crowe as Roger Ailes (“The Loudest Voice”), Michelle Williams as Gwen Verdon (“Fosse/Verdon”), Stellan Skarsgard as Boris Shcherbina (“Chernobyl”), Patricia Arquette as Dee Dee Blanchard (“The Act”), Renee Zellweger as Judy Garland (“Judy”) and Taron Egerton as Elton John (“Rocketman”). Will Fanning be next?

Fanning truly shines in the many scenes in which her character acts defiantly and breaks the rules. The entire premise of the show is built on defiance as Catherine seeks to overthrow her husband and rule Russia herself. Every time she acquires a new member of her coup d’état team, Catherine’s sly smirk elicits cheers from the viewing audience — we’re all shouting “Huzzah!” from our couches. The last time viewers fell in love with a character this rebellious was June/Offred on “The Handmaid’s Tale,” and Elisabeth Moss took home a lead actress Golden Globe for it.

At 22 years old, Fanning has been working steadily her entire life, but she’s never been recognized with a major industry award. Fanning did earn a SAG ensemble bid alongside the cast of “Trumbo” (2015) and scored three Critics’ Choice nominations as Best Young Actor/Actress for “Somewhere” (2010), “Super 8” (2011) and “Ginger & Rosa” (2012). Hoult’s biggest awards notices so far were a nomination for “About a Boy” at the Critics’ Choice Awards and a 2010 Rising Star Award bid at the BAFTAs.