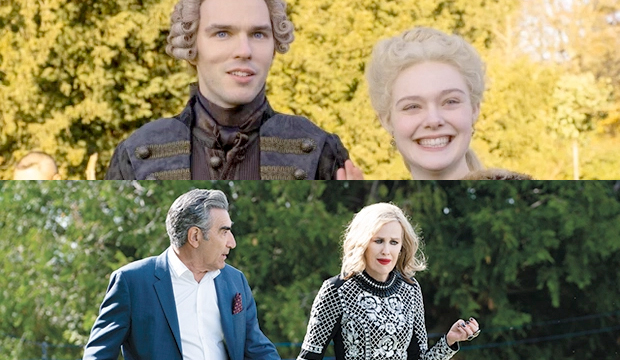 In the past 20 years, only one TV show has taken home Golden Globes for Best Comedy Series, Actor and Actress in the same evening: “30 Rock,” Alec Baldwin and Tina Fey all prevailed at the 2009 ceremony. This year, Hulu’s “The Great” and Pop’s “Schitt’s Creek” are eligible to join that esteemed list. Both series are nominated in the top category as well as for their lead performers: Nicholas Hoult and Elle Fanning for the former, Eugene Levy and Catherine O’Hara for the latter. (“Schitt’s Creek” is also nominated for its supporting players, Dan Levy and Annie Murphy.) Can either of these shows pull off the rare triple whammy?

According to Gold Derby’s Golden Globe predictions, the final season of “Schitt’s Creek” has the better chance to three-peat, as of this writing. The Canadian comedy about a rich family who loses everything is in first place for series and actress, while Levy is the predicted runner-up to Jason Sudeikis (“Ted Lasso”) for actor. As for freshman comedy “The Great,” this fanciful look at Fanning’s Catherine the Great comes in third place for series, actor and actress. Season 1 follows Catherine’s ruthless attempts to gain power in Russia by manipulating her dimwitted Emperor husband.

The other shows nominated for Best Comedy Series are Netflix’s “Emily in Paris,” HBO Max’s “The Flight Attendant” and Apple’s “Ted Lasso.”

The Golden Globes’ big sister, Emmy, recently honored “Schitt’s Creek” with a record nine wins, including victories for series and all of its main cast. To compare, “The Great” was strangely snubbed in those major races by the Television Academy and only received a pair of nominations for writing and directing.

Both programs could have an uphill climb if they hope to emulate “30 Rock’s” three-peat from a dozen years ago. For “Schitt’s Creek,” it will have to overcome the Globes’ bias against old shows. Indeed, the Hollywood Foreign Press Association tends to favor new programs and only rarely reward things so late in their run — in this case, it’s the sixth and final season of “Schitt’s Creek.” Meanwhile, “The Great” aired way back in May and so voters might feel more inclined to anoint newer projects like “Ted Lasso” or “The Flight Attendant” as a way to try to influence the upcoming Emmys. Stay tuned.