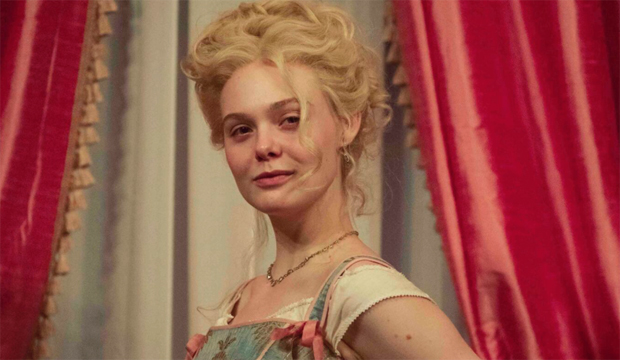 Elle Fanning (“The Great”) released an image of her character Catherine the Great on Instagram looking positively glowing. “Cooking up something special for season 2,” Fanning teased about her pregnant Empress character in the Season 2 first look photo (see below).

Hulu followed up her pic with a caption of their own that read, “In season two, Catherine becomes both a mother to Russia and a child.” But who’s the father to Catherine’s unborn baby: Nicholas Hoult‘s Peter III of Russia (her husband), Sebastian De Souza‘s Leo Voronsky (her lover) or someone else entirely? Stay tuned.

There’s still no official word on when the second season of the satirical comedy series will air, as it was delayed due to the Covid-19 pandemic. The first season from showrunner Tony McNamara (“The Favourite”) streamed all 10 episodes on May 15, 2020. Season 1 followed Catherine’s ruthless attempts to gain power in Russia by manipulating her dimwitted Emperor husband.

At last year’s Emmys, “The Great” scored a pair of bids for writing (McNamara) and directing (Matt Shakman). While that was a smaller-than-deserved haul, the show rebounded last week by earning major bids at the Golden Globes, Critics Choice and SAG Awards.

Besides Fanning and Hoult, here are all of the actors recognized by the Screen Actors Guild as part of the ensemble cast: Belinda Bromilow, Sebastian de Souza, Sacha Dhawan, Phoebe Fox, Bayo Gbadamosi, Adam Godley, Douglas Hodge, Louis Hynes, Florence Keith-Roach, Gwilym Lee, Danusia Samal and Charity Wakefield. The other nominated casts at SAG are “Schitt’s Creek,” “Ted Lasso,” “Dead to Me” and “The Flight Attendant.”

Does Hulu’s tease of Catherine’s pregnancy make you more excited for Season 2 of “The Great”? Let us know by sounding off down in the comments section.