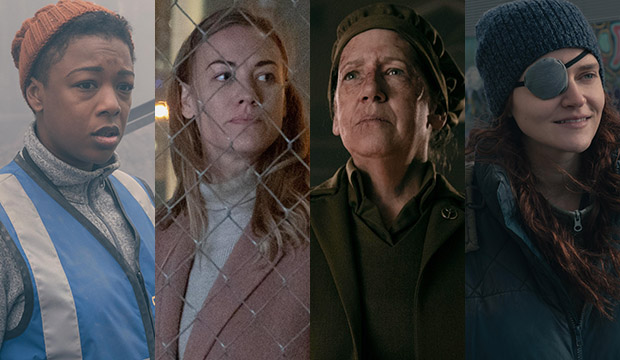 “The Handmaid’s Tale” has accrued six nominations in the Emmys’ Best Drama Supporting Actress category: two for Ann Dowd and Samira Wiley for the first season; three for Alexis Bledel, Dowd and Yvonne Strahovski for the second; and one for Wiley for the third. This year, it could up its overall total to 10 with four performers — Madeline Brewer, Dowd, Strahovski and Wiley — submitted in this category for the fourth season. But will all four actors be sent good weather by the TV academy? Let’s break down their individual chances.

Ann Dowd (fourth in our odds):
Dowd surprised us all when she not only got nominated but won for “Handmaid’s'” debut installment in 2017. While she returned to the supporting actress lineup for the show’s second season in 2018, she was snubbed for the third season last year. It’s no surprise, however, that she’s expected to come back this year considering she’s the first and to date only “Handmaid’s” actor to have won this category (“Westworld’s” Thandiwe Newton won in 2018 and “Ozark’s” Julia Garner in ’20). Plus, she, a working screen actor since 1985, might still be cashing in her IOU after finally breaking through at the Emmys in 2017 with not one but two citations, the other nomination for her guest spot on HBO’s “The Leftovers,” which notably earned no other noms during its entire three-season run. While she doesn’t have a clear showcase episode like the Aunt Lydia-centric outing last season, Dowd gets to unveil new shades of her character in Season 4, which sees Lydia spiraling as she desperately tries to reclaim the position of power she once had.

SEE Will ‘The Handmaid’s Tale’ steal ‘The Crown’s’ thunder again?

Samira Wiley (fifth in our odds):
Of this year’s four contenders, Wiley is the only one to have snagged Emmy bids every season. After being shortlisted in supporting for the first, she triumphed in guest for the second, overcoming co-stars Kelly Jenrette and Cherry Jones. Even when the show earned its lowest nomination total to date with 10 bids last year, Wiley, who was not in much of the third season, made the cut in supporting. It’s hard to believe she wouldn’t able to pull it off again this year when “Handmaid’s” is likely to see an uptick in noms and the actor had significantly more screen time in the fourth season. As opposed to Dowd, Wiley has a striking showcase episode, in the sixth outing, “Vows,” in which her character Moira puts everything on the line to convince a traumatized and guilt-ridden June (Elisabeth Moss) to escape to Canada.

Yvonne Strahovski (sixth in our odds):
Unlike her two aforementioned co-stars, Strahovski had to wait for the second season to be nominated. Returning after being omitted last year might be harder for her than for Dowd since there’s been less perceivable support for her thus far. With that said, she, the arguable MVP of Season 2, was probably close to winning in 2018, when she was predicted to triumph, per our odds, but ultimately fell to Newton. The fact that she has been under-recognized for her performance as Serena could now actually help her if voters play catchup. Even though Serena is predominantly confined to a detention facility in Canada this season, she still goes on an emotional roller coaster between grappling with the news of her surprise pregnancy and June’s arrival to Canada. Despite sparser screen time, Strahovski runs the gamut of emotions and should be nominated for just her pain-filled cry during Serena’s confrontation with a wrathful June.

Madeline Brewer (16th in our odds):
If anyone was highlighted in the fourth season, it was Brewer, who has never been nominated for an Emmy. While not being a previous nominee might make it more difficult for her to break through for a seasoned show that could be past its heyday at the Emmys, she should not be counted completely, especially if voters were up to date on “Handmaid’s” before they marked off their ballots. Like Wiley, Brewer has a dynamite showcase in the fourth outing, “Milk,” which spotlights her character Janine’s autonomy and flashes back to when Janine sought an abortion in her pre-Gilead life. Similarly to Strahovski, Brewer could capitalize on being arguably overdue for her work on this show, all the more so for a season in which she had juicier material than ever before.

The good news for all four performers is that only two of last year’s eight supporting actress nominees are eligible this year: Wiley and “The Crown’s” Helena Bonham Carter. While “Handmaid’s” took a slight hit at the Emmys last year, also missing out for Moss in drama actress, it still managed to crack the drama series lineup and rack up three acting citations, the other two for Bledel in guest actress and Bradley Whitford in supporting actor. As opposed to the third season, which premiered almost an entire year before the 2020 Emmy cutoff date, the fourth aired in the heart of Emmy season and was hailed as a return to form. And since many of last year’s contenders are out of the mix this year due to COVID-19, the field might be open enough for “Handmaid’s” to therefore make a big comeback across the board.