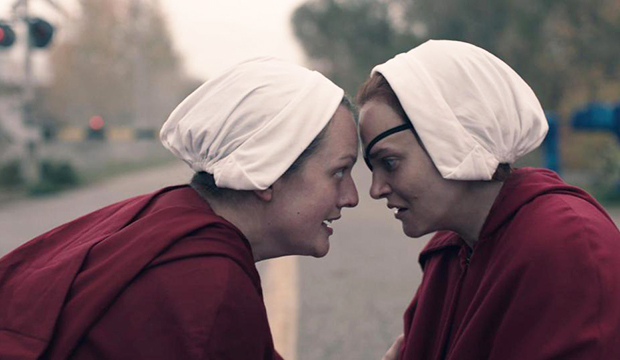 Blessed be the return! After a 20-month hiatus, “The Handmaid’s Tale” finally launched its highly anticipated fourth season with three episodes on April 28. The show took a bit of a hit last year, when, despite scoring its third consecutive Best Drama Series bid, it amassed its lowest nomination and win totals to date with 10 citations and one victory for its third installment. Will it be able to rebound this year?

While 10 nominations and one win (for production design) aren’t shabby, they pale in the context of “Handmaid’s’” overall success at the Emmys. The show accrued 13 bids and eight victories — including Best Drama Series — for its inaugural season in 2017; 20 and three, respectively, for the first 10 episodes of the second installment in 2018; and 11 and three, respectively, for the three orphaned Season 2 episodes in 2019. And even though it was able to hold on to its drama series nom last year, it missed out in a number of key categories, including writing, directing and actress for Elisabeth Moss above the line, and cinematography and editing below the line.

But circumstances are different this time around. As opposed to the show’s third season, which premiered almost an entire year before the 2020 Emmy cutoff date, its fourth is airing in the heart of Emmy season and will conclude its 10-episode run on June 16, just one day before nominations voting begins. It’s also one of the last eligible drama series to air in this Emmy cycle, which could put it top of mind for voters. And since many of last year’s contenders are out of the mix this year due to COVID-19, the field might be open enough for “Handmaid’s” — which, all things considered, was still strong enough to crack last year’s drama series lineup — to make a big comeback across the board.

Its fourth installment picks up right where the third left off: with 86 children and nine Marthas having landed on Canadian soil, the Waterfords still in a detention facility in Canada and a wounded June on the run alongside a group of other handmaids. This season certainly hasn’t doubled down on depicting Gilead’s grim, brutal realities, centering primarily on the effects the totalitarian patriarchal theocracy has on its sufferers, both within and outside of its parameters. At the same time, however, it promises a number of long-awaited and much-needed moments of payoff and justice to which the series has been ambitiously building for three seasons.

Of its four above-the-line noms from last year, the show is forecasted to retain three, per our current Emmy odds: drama series, supporting actor for Bradley Whitford and supporting actress for Samira Wiley. Also shortlisted last year was Alexis Bledel, who is once more eligible in, and likely return to, the drama guest actress category, which has not yet been added to Gold Derby’s predictions center. Meanwhile, Moss as well as supporting players Ann Dowd and Yvonne Strahovski are all expected to return after missing out last time around.

Come fly with 'The Flight Attendant' across the years in movies

'Bridgerton' bro bound for Emmys? Jonathan Bailey is a strong bet for a nomination, according to our…