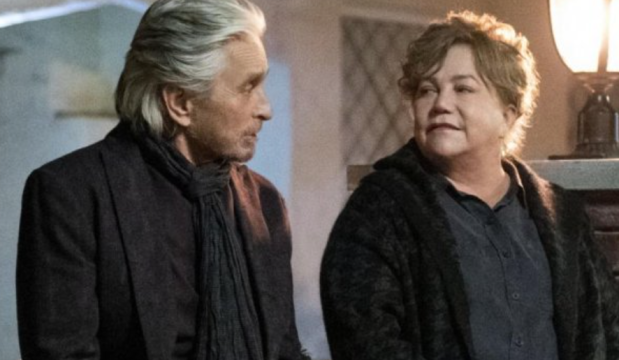 “The Kominsky Method” saved the best for its third and final season. Ironically, there was never supposed to be a third season of the Chuck Lorre-created comedy starring Michael Douglas as Sandy Kominsky, a Hollywood acting teacher with a messy private life. “I just read the first script of the first season and the writing was so darn good I just wanted to it,” said Douglas during a Deadline Zoom conversation. “It was an original, two-year commitment contract with Netflix.” But Douglas wasn’t ready to let Sandy go. “I kind of pushed for this third season,” he said.

Alan Arkin, who played his long-suffering agent, BFF and conscious, bowed out after the second year. “Alan is a few years older than me. It’s tough doing these shows anyway, moving as quickly as this.  I think two seasons was fine for him.” Lorre was also eager for a third season and agreed to write all the episodes.

Rated 100% fresh on Rotten Tomatoes, this season finds Sandy coping with the death of his buddy Norman, the return of his feisty first wife Roz (Kathleen Turner) who is back in Los Angeles to help their daughter Mindy (Sarah Baker) prepare for her marriage to 69-year-old Martin (Paul Reiser). She also has another reason for being back with family. And Sandy finally gets a big acting break being cast by Barry Levinson in a TV remake of Hemingway’s “The Old Man and the Sea.”

“We had a good year and I just felt good about it because after those two seasons I wanted to put a bow around it, just to make the whole story a little package and finish it,” said Douglas. That’s sort of what we’ve done.” It is magical because of the addition of Turner, who was seen briefly in the second season. The two rekindle the chemistry they exuded in 1984’s “Romancing the Stone,” 1985’s “The Jewel of the Nile” and 1989’s “War of the Roses.”

Turner explained that she and Douglas work so well together because of the hardships they endured in the arduous locations in Mexico nearly 40 years ago on “Romancing the Stone.” “That was no piece of cake,” she said. “I mean, I think, I walked out of that with at least seven stitches. By at the same time, my God, it was an adventure. There was no time to muck about. We just threw ourselves into it and that sort of breaks down all the barriers, I guess. We have never lost that feeling for each other. It’s lovely.”

Lorre asked Turner to join the cast this year. “I haven’t done a great deal of television really. He promised me, as he said to Michael, that he would write every episode himself. It would not be farmed out to a team [of writers] or anything like that. And he did, which made the writing so consistent and so powerful, I thought. I mean there was never any sort of argument about words or jokes. It was just there.”

“One of the benefits of shooting I the pandemic year,” noted Reiser, “is that he had all the time to write it. So often in episodic you’re shooting eepisode two and hope to God, three comes in.” Turner apologized but left her seat and headed off. “Excuse me one minute,” said Turner. “Go ahead,” Reiser quipped. “A lot of times Kathleen can’t tolerate me talking. I get it. A little of me goes a long way.” With that, Douglas got up from his seat and pretended to exit: “Keep talking, Paul.” Turner soon returned “I had a delivery,” she explained.

Though “Kominsky Method” is a comedy, Lorre deftly weaves in pathos like in the first episode which opens with Norman’s funeral. Douglas recalled looking at the script and telling Lorre he wouldn’t start the third season with a funeral. “This is a comedy. I wasn’t that sure and certain about it. But he pulled it off. When I saw it all put together, it was hilarious.” “Chuck wrote this [season] so beautifully and thoroughly,” Reiser said. “Everything was thought out.” Douglas explained that Lorre never knows where a season will go. “He doesn’t map it out at all. So, the first episode takes you to the next episode, so I really didn’t know the finale. “

And when it came up that, spoiler alert, Sandy would win the Emmy for his performance in “Old Man and the Sea,” Douglas’ first instinct was “Is this going to be a little too precious? Is this going to be a little too sweet?’ But this was quickly erased by playing an acceptance speech. It was a lovely way to tie it all together and then see him go back to work as an acting teacher which was his love and what he was best at, but also acknowledged as an actor.”

“In a season that had death and illness and all of these major life events, it came as such a surprise at how moving that story was,” noted Reiser. “I agree with Michael. When I first heard it, I thought ‘Well, that sounds a little inside baseball. Is anybody going to care about an actor who got a movie?’ But it’s much bigger than that because it’s about a guy at this point in his life going ‘I kind of accepted my lot and now I have to reopen.’ That’s such a subtle, smart and universal feeling.”