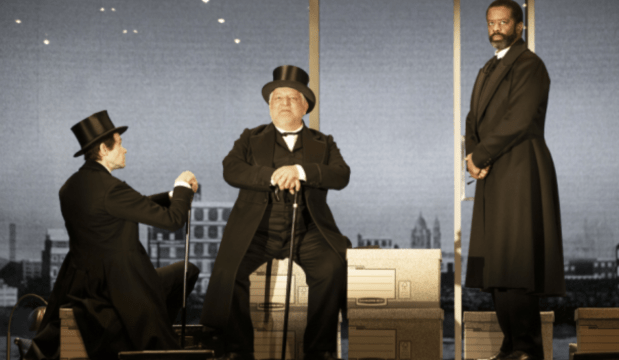 “The Lehman Trilogy” has had a protracted journey to Broadway. Not quite as long as the nearly two centuries of history that the play chronicles, of course, but what began in London in 2018 and made a splash Off-Broadway in 2019 has finally arrived at the Nederlander Theatre, opening on Oct. 14. Ben Power’s adaptation of Stefano Massini’s play originally began previews on March 7, 2020, but played less than one week before the coronavirus pandemic shuttered theaters.

Beginning in 1844 when the first of the three Lehman brothers arrived in New York from Bavaria, “The Lehman Trilogy” chronicles this notorious family’s insatiable quest for wealth and capital accumulation through the 2008 stock market crash that toppled the firm. Tony-winner Sam Mendes directs a cast of three actors – Simon Russell Beale, Adam Godley, and Adrian Lester – who play the innumerable characters needed to tell the tale of generations of Lehmans and centuries of global capitalism.

In her Critic’s Pick review, Laura Collins-Hughes (New York Times) deems “The Lehman Trilogy” a “captivating production,” a “vividly human tale, nimbly performed by three of the finest actors around,” and “a peculiarly gentle interrogation of the American dream’s descent into many-tentacled nightmare.” “The primary reason to see” the play, she concludes, “is to witness the superb Beale, Godley and Lester in their feats of storytelling.”

Less enamored but still admiring, Helen Shaw (Vulture) writes, “There’s a feeling at the end of this atmospheric show, gorgeous and intoxicating as it often is, of a mighty steel beam bending out of true – all its strength can’t travel so far unsupported.” Though it doesn’t quite live up to its potential, she still calls the play “a symphony of theatermakers working at their pinnacle. The actors never stop being wonderful, and the set never stops being handsome, and the music never stops being beautiful,” but “the drama only grows less connected to its characters as it marches down the generations.”

The majority of reviews read like these two, either adoring or at least admiring. “Lehman” does have its critics, though. Juan Michael Porter (Did They Like It?), for example, calls the play a “by-the-numbers, theatre-as-a-Wikipedia-article approach to telling its story,” and highlights some instances where it could have better handled depictions of gender and race.

SEE ‘Thoughts of a Colored Man’: Critics find this new Broadway play to be ‘poetic’ but ‘uneven’

Although we have just kicked off the 2021-2022 Broadway season, “The Lehman Trilogy” seems like an early Tony Awards contender. The predominantly warm reception to the epic work suggests that the small Tony nominating committee will take a liking to the highly-anticipated and ambitious play. It is a crowded season for plays, though. “The Lehman Trilogy” debuts alongside nine other new dramas, including “Pass Over,” “Chicken & Biscuits,” “Is This a Room,” “Thoughts of a Colored Man,” “Dana H.,” Lynn Nottage’s “Clyde’s,” Dominique Morisseau’s “Skeleton Crew,” Tracy Letts’ “The Minutes,” and “Birthday Candles.” Though stranger things have happened – we all remember the “To Kill a Mockingbird” snub in 2019 – “Lehman” seems a safe bet for a Best Play nomination.

Perhaps even stronger than the play itself are its incomparable three stars. Shaw writes, “The rare chance to see just one of these men perform is worth the price of admission. All three together – heartbreaking Beale and wall-shaking Lester and the living lightning bolt Godley – is a chance that will not come again.” All billed below the title, the Tony-nominated Beale, Tony-nominated Godley, and Lester in his Broadway debut will all compete in Featured Actor. Though the category will have no shortage of contenders, it is a possibility that all three receive nominations. Beale seems the most assured: he opens the show as the first Lehman to come to America and delivers a speech with what Shaw describes as “sharp, astonishing grief.”

On its crafts, two-time Tony nominee Es Devlin has created an impressive rotating glass office-set that will likely secure her a third career citation for scenic design. Two-time Tony winner Katrina Lindsay contributed the costumes, which according to Shaw “radiate both Gilded Age sumptuousness and Bavarian humility.” And after this year’s ceremony, in which a play won Best Score for the first time in Tony Awards history, Nick Powell could surprise with a nomination for his piano composition – performed live by Candida Caldicot – which Shaw says “makes the time seem swift, the music like water tumbling over rocks.”

At the helm, Sam Mendes also looks like a strong contender in Best Director. The Tonys have often rewarded him in the past: he has nine career nominations, including two as a director. He has won five Tonys, including one for directing another family epic, “The Ferryman” (2019). For his impressive, stylish, and evocative wrangling of nearly two hundred years of history into just over three hours of theatre, Mendes will no doubt receive kudos.