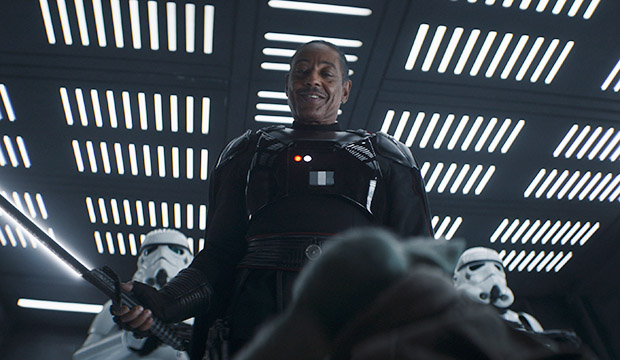 Among the many Emmy nominations “The Mandalorian”’ landed for its first season was a guest acting bid for Giancarlo Esposito, who portrays the villainous Moff Gideon on the Disney+ Star Wars series. This year, the character’s expanded presence in the show’s second season has made the versatile actor eligible in the Best Supporting Drama Actor race. Should he snag a nom, it will be his first in the category for playing a role other than “Breaking Bad” villain Gus Fring.

Esposito received his first nomination for Best Supporting Drama Actor for his portrayal of the Los Pollos Hermanos owner and drug kingpin on the critically beloved AMC drama in 2012. He lost to co-star Aaron Paul, who took home his second Emmy for portraying Jesse Pinkman. Although Fring died in shocking fashion during the show’s fourth season, Esposito reprised the fan-favorite role in the show’s critically acclaimed prequel spin-off “Better Call Saul’ beginning in Season 3. Since then he has nabbed two more nominations for his performance, the first in 2019 and then another in 2020. Unfortunately, he lost both times, first to “Game of Thrones” star and four-time supporting drama actor winner Peter Dinklage and then to Billy Crudup of Apple TV+’s “The Morning Show.”

SEE Can ‘The Mandalorian’ topple ‘The Crown’ at the Emmys?

While he’s ineligible for “Better Call Saul” this year since the show’s sixth and final season was delayed by the pandemic, Esposito is primed to be recognized for his work on “The Mandalorian.” He is currently sitting in fifth place in Gold Derby’s combined supporting drama actor odds, behind Michael K. Williams (“Lovecraft Country”), Tobias Menzies (“The Crown”), Bradley Whitford (“The Handmaid’s Tale”) and John Lithgow (“Perry Mason”). Rounding out the rest of the top eight are John Benjamin Hickey (“In Treatment”), Jonathan Bailey (“Bridgerton”) and Chris Sullivan (“This Is Us”).

Should Esposito make the cut, he’ll become just the second person in history to have ever been nominated in the supporting drama actor category for three different shows. The first person to achieve such a feat was actually Esposito’s co-star Jonathan Banks, who, like him, has been nominated for playing the same character — in his case, cleaner/fixer Mike Erhmantraut — on both “Breaking Bad” and “Better Call Saul.” His other nomination came way back in 1989 for his performance as Frank McPike on the CBS drama “Wiseguy.”

Whitford is the only nominated actor from last year who is currently eligible to return to the supporting drama actor race for the same show in 2021. That, combined with the fact Esposito seems beloved by Emmy voters, means his chances of earning another bid this year appear to be pretty good. Whether or not he can finally triumph over the competition is another story. One thing working in his favor is the fact he’s not eligible for playing Fring; Emmy voters have never taken to “Better Call Saul” the way they did “Breaking Bad.” Despite 39 nominations, the show has yet to win a single Emmy in the five years it’s been eligible. This is not to say “The Mandalorian” is necessarily going to have better odds — genre shows have traditionally struggled at the Emmys — but the academy clearly likes the series, as evidenced by its 15 nominations and seven wins for its first season. Emmy voters also tend to come to the party a bit late, so it’s possible the show will do even better in its second season, which could mean finally bestowing some awards love on Esposito.