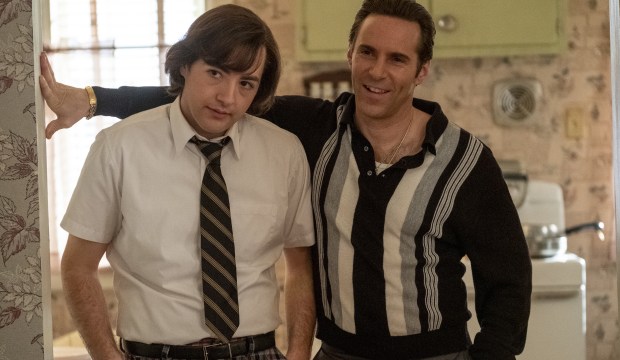 Critics woke up this morning to reveal their first impressions of David Chase’s return to the world of “The Sorpanos” with “The Many Saints of Newark.” The prequel film, set decades before the events of the Emmy Award-winning HBO series, is out in theaters and available via HBO Max starting on October 1.

“Directed with unfussy confidence by ‘Sopranos’ veteran Alan Taylor, it wants to give people more of a show they love because of how forcefully it argues that more is never enough,” Indiewire critic David Ehrlich wrote in his B-minus review. “The result, almost by design, is equal parts gratuitous fan service and gripping mob drama; a clumsy devil’s handshake of a film that’s asphyxiated to death by the same mythology it also leverages into a masterful origin story about cyclical violence and the sins of the father. The power of a prequel is that it can make everything we’ve already seen feel like predestination, but ‘The Many Saints of Newark’ so insistently renders the past as prologue that it sometimes forgets the past has to be present first.”

Starring Alessandro Nivola as Dickie Moltisanti, the father of famed “The Sopranos” character Christopher Moltisanti (played in the original series by Michael Imperioli), and a murderer’s row of tough guys (including Ray Liotta, Corey Stoll, and Jon Bernthal), “The Many Saints of Newark” focuses on the early days of the New Jersey crime family. The movie also stars Michael Gandolfini, the son of late star James Gandolfini, as Tony Soprano and Vera Farmiga as Tony’s mother, Livia.

Michael “matches up with his actor father in ways that are uncanny and dramatically touching,” Owen Gleiberman wrote in his review for Variety. “The front teeth that jut out slightly, creating a subliminal lisp, the look of imploring moon-faced wonder: We look at this long-haired but still wide-eyed kid, who’s like an edgier John Cusack, and he’s just what you might have imagined Tony Soprano would be as a New Jersey delinquent caught between his painfully dysfunctional family and the culture of rock ‘n’ roll freedom.”

While Tony factors heavily in the story, “The Many Saints of Newark” is not just an origin story for the future mob boss. In his review, The Hollywood Reporter critic David Rooney wrote that while Tony as a role has “limited scope” for Michael Gandolfini, the actor does “fine” with his performance. “Chase wants to have it both ways, delivering a treat for diehard fans as well as a stand-alone movie not dependent on detailed knowledge of the series,” he added. “As a result, the film expands on the Sopranos foundations but not the series’ perspective.”

“The late-’60s and early-’70s production and costume design, by Bob Shaw and Amy Westcott, respectively, are rooted firmly in an evocative sense of time and place, enhanced by a soundtrack of pinpoint needle drops,” Rooney continued. “But ‘The Many Saints of Newark’ is more of a diverting footnote than an invaluable extension of the show’s colossal legacy. It’s telling that one of the movie’s most electrifying moments is when the churning synth bassline of ‘Woke Up This Morning’ blasts out over the end credits.”

Entertainment Weekly critic Leah Greenblatt also found the film a bit split down the middle between the television series and a standalone venture. “In more than a few moments — a walk on a winter beach, a warning bullet shot through the top of a startled bouffant — that feels like actual magic, recreated. (Who else could conjure the exquisite vanity of a dapper young hoodlum patiently lacquering his fingernails in clear gloss at the dinner table?),” she wrote. “At other times it just feels like a tease: ten tons of backstory squeezed into a two-hour runtime.”

“The Many Saints of Newark” was originally supposed to be a theatrical-only debut in September of last year, but the movie was delayed because of the coronavirus pandemic. In keeping with the WarnerMedia strategy for 2021, the film is now a simultaneous release in theaters and on HBO Max. Chase said he was not thrilled with that move, telling Deadline it left him “angry.”

“People should go see it in a theater. It was designed to be a movie. It was…it’s beautiful as a movie. I never thought that it would be back on HBO. Never,” Chase said.