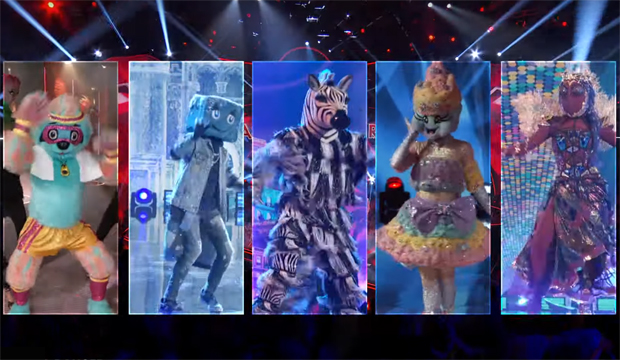 “The Masked Dancer” introduced its Group B contestants during Wednesday’s second episode, but who ended up going home first: Sloth, Ice Cube, Zebra, Cotton Candy or Moth? This colorful and eccentric collection of characters gave it their all on the stage in front of a virtual audience and panelists Ashley Tisdale, Brian Austin Green, Ken Jeong and Paula Abdul. In the end, four advanced to the next round while one was unmasked in front of America. How’d it all play out?

Below, read our minute-by-minute “The Masked Dancer” recap of Season 1, Episode 2, titled “New Year, New Mask! (Who Dis?),” to find out what happened Wednesday, January 6 at 8:00 p.m. ET/PT. Then be sure to sound off in the comments section about your favorite costumed characters on Fox’s reality TV show and who you think has what it takes to win the entire competition.

8:00 p.m. — “Previously on ‘The Masked Dancer’!” In the first episode, host Craig Robinson introduced viewers to the Group A contestants: Disco Ball, Tulip, Cricket, Hammerhead and Exotic Bird. After all the votes were tabulated, Disco Ball was forced to turn out his lights forever. The panelists were all shocked when Disco Ball removed his mask to reveal Ice-T. “Absolutely the craziest thing that I’ve ever done,” the actor and rapper told the judges. But enough about last week — it’s time to meet Group B!

8:10 p.m. — The Sloth will kick off tonight’s competition and he instantly looks like someone with a fun sense of humor. He says he has worked hard to get to where he is today and we see a lot of “D.R.” badges. When he was a kid he had a bad accident and people talked “down and dirty” to him, saying he was a Mickey Mouse operation. We see him brushing his teeth with “Glee” toothpaste and the number 13 on his drinking cup. Tonight the Sloth is dancing to “What I Like About You” by the Romantics. This is sort of a ridiculous routine with a workout theme, but in the right moments, Sloth actually has some moves! Overall, this was a fun and well-danced routine. Ken called it “entertaining, funny and skilled.” Paula is convinced that the Sloth is a trained dancer. His one-word clue is “Broadway” and the panel guesses the Sloth is Matthew Morrison, Kevin Federline or Jason Derulo.

8:20 p.m. — Ice Cube is the next dancer to make his way to the stage. He’s pretty successful now, but the road to get there was slippery. Even though he had money, he was home alone and isolated while his mom was off doing important work (we see an image of the White House). His father was in prison. Next we see some ballet slippers and numerous comments about climate change. Tonight Ice Cube is dancing to “Bad Romance” by Postmodern Jukebox. This is a partner dance, which allows the partner to do most of the work. This isn’t bad, but I’m not terribly impressed by the Ice Cube. The panel is sure the Ice Cube isn’t a trained dancer and he gives them a brief one-word clue of “90’s icon.” Okay, so that was two words. The panel thinks Ice Cube could be Bill Nye, Bill Maher or Anderson Cooper.

8:30 p.m. — Zebra is the next creature on stage and I love the fringe on this animal! Right off the bat, the clue mentions Bong Joon-ho and Roger Deakins, which is an interesting combination of director/cinematographer. Both won Oscars last year. Zebra says he has fallen out of the lime light and grew up in a rough neighborhood. The initials “OS” are on the side of a vehicle  and he mentions “one direction,” so perhaps he is a boy band member? He’s also dancing with a hot dog in the clue package and says the President knows his name (perhaps someone from “Celebrity Apprentice”?). Tonight Zebra is dancing to “Magalehna” by Sergio Mendes. He’s doing some salsa moves with a partner and can’t really keep up with her when they’re dancing in tandem. When he’s off on his own he sort of just shakes his fringe. Not a great dancer, but the Zebra has some rhythm. Paula loves the costume and Ken suggests he’s a trained dancer who is hiding his moves. Zebra’s one-word clue is “comeback.” The panel thinks Zebra could be Ricky Martin, Pitbull or Kevin Richardson.

8:40 p.m. — It’s time for some Cotton Candy! She comes out with a ton of pizzazz and the panel instantly assumes she is young. Cotton Candy is a perfectionist, but things in her life haven’t always been so sweet. We see a plate of breakfast food (with a side of beans) and a drawing board with a wizard’s hat. She says that in order to achieve her dreams she had to move in with a new family when she was just a kid. She says she’s a fighter and we see cupcakes with some big lips on them. In rehearsals, Cotton Candy took a devastating fall but she’s back to perform! Dancing to “Glitter in the Air” by Pink, Cotton Candy is giving us an aerial performance to begin the routine. Next she uses a partner to dance her through a contemporary piece. It’s definitely the most sophisticated dance of the season thus far. Paula is convinced she’s a trained singer. Cotton Candy’s vocal clue was “primetime.” The panel guesses Cotton Candy is Jenna Dewan, Pink or Julianne Hough.

8:50 p.m. — Tonight’s final dancer is the Moth. Her costume is beautiful and she walks like a supermodel. Fierce! The Moth doesn’t seek the spotlight, it draws her in whether she wants it or not. We see a box marked “clothes” as the Moth explains that she was a regular person one day and suddenly she was making headlines with the president. She had a traumatic experience that not many could have gone through, and in turn, her life was changed forever. Moth is a survivor and now she uses her spotlight to shine it on things she cares about most. Tonight Moth is dancing to “Boot Scootin Boogie” by Brooks & Dunn. She’s doing country line dancing, which is a fun genre twist we haven’t seen yet. She seems really tall! The panel seems to like her quite a lot, but don’t believe she’s a trained dancer. Moth’s one-word spoken clue is “inspired.” The panel guesses Moth could be Megyn Kelly, Monica Lewinski or Marla Maples.

8:59 p.m. — It’s time to find out which dancer received the least amount of votes and will be unmasked tonight. Craig reveals the first dancer from Group B to be voted off is Ice Cube. Before he unmasks we learn Ice Cube has a huge social media following, has been seen by millions on TV and has some white hair. For their final guesses Ashley says Al Gore, Ken says Bill Nye, Paula says Tim Gunn and Brian thinks he Ice Cube is Bill Maher. At last, Ice Cube pulls off the mask to reveal he is 18-time Emmy winner Bill Nye. Ken was right! Did you guess the “Science Guy” was behind the mask? That’s a wrap for tonight.