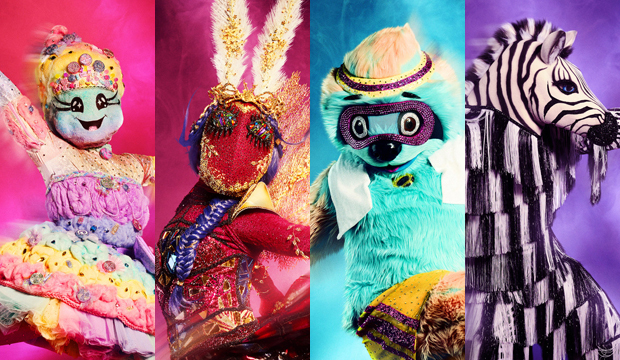 Heading into the Group B playoffs of “The Masked Dancer,” four contestants were still in the running to win the Diamond Mask trophy: Cotton Candy, Moth, Sloth and Zebra. (Group A took the week off but will return next week.) Each of these hop-steppers gave it their all on the stage on Wednesday night, but one was sadly eliminated and forced to reveal their true identity in front of America and panelists Ashley Tisdale, Brian Austin Green, Ken Jeong and Paula Abdul. So which three survived to dance another day?

Below, read our minute-by-minute “The Masked Dancer” recap of Season 1, Episode 3, titled “These Masks Don’t Lie,” to find out what happened Wednesday, January 13 at 8:00 p.m. ET/PT. Then be sure to sound off in the comments section about your favorite costumed characters on Fox’s reality TV show and who you think has what it takes to win the entire competition.

8:00 p.m. — “Previously on ‘The Masked Dancer’!” In the second episode, host Craig Robinson introduced viewers to the Group B contestants, with Ice Cube receiving the lowest number of votes. Ken was the only judge to guess the secret identity of the frozen matter … Bill Nye. “It may not have been obvious, but I love to dance,” the “Science Guy” revealed in his exit interview. But enough about last week — it’s time to eliminate one more person from Group B!

8:15 p.m. — Tonight will include a guest judge on the panel, “Curb Your Enthusiasm” star Cheryl Hines. She takes her place on the panel and the Group B playoffs then begin with Zebra. Here are some brand new clues: He has been missing the taste of adrenaline he feels on “Masked Dancer” since his “golden promotion” to Z.E.O. He loves to help others, especially those who may not be able to help himself. We see a website for “Dad’s appliances” and mention of U.F.C. He says his childhood was surrounded by poverty and crime as he breaks a record. We also see cinnamon and mention of great mentors and friends. He also mentions fighting again before he reveals tonight’s dance will be a sexy duet. The Zebra is dancing to “All My Life” by K-Ci & JoJo. As promised, it’s a slow partner dance that includes some signature Latin movements, but he’s not exactly killing this. It never really reached much of a climax, and the panel loves it but I’m completely underwhelmed. Paula mentions that Zebra moves like a boxer. Next, Zebra gives them a one-word voice clue: “Champion.” He’s definitely got an accent. The panel thinks Zebra could be Floyd Mayweather, Tony Robbins, Mario Lopez or Tito Ortiz.

8:25 p.m. — Second to the dance floor is Cotton Candy. Here are some clues: After last week’s scary fall she is more determined than ever to succeed. She’s used to setbacks and grew up in a place where life was carefree and simple…for everyone but her. It was hard to balance practice with everything else in her life. She missed out on many milestones and felt “iced out” by kids her age. We see lipstick (maybe she has a make-up line)? We also see a hawk and she says tonight she’s joining a group of dancers. Cotton Candy is dancing to “Sour Candy” by Lady Gaga featuring Blackpink. It’s a choreographed pop routine and she definitely looks comfortable learning a few steps. She appears to be athletic and no novice to the big stage. Ashley thinks Cotton Candy is a gymnast, professional dancer or an ice skater. Her one-word clue is “Team player.” Not exactly one word, but the panel has some ideas about Cotton Candy’s identity: Jenna Dewan, Tara Lipinski or Kristi Yamaguchi.

8:37 p.m. — Next up is Moth. Here are a few more clues about the winged dancer: She never thought she’d be on this stage and dancing on national TV. She feels confident, but once she was just a shy caterpillar trying to figure out her place in the world. It was her choice not to allow the traumatic details of her past to define her future (we see a picture of Queen Elizabeth II). Her news headline is “Survivor Speaks!” and it also says, “Be Brave. Be Smart.” We see a chef doing something, but I’m not sure about that. Moth looks like a tall woman and seems like there is some controversy around her. Tonight she’s dancing to “Sway” by Michael Bublé. It’s a sexy ballroom dance, but Moth doesn’t always look completely comfortable with the choreography. She’s definitely in danger of going home after that, despite the panel thinking it was a fun performance. Her spoken word clue is “Best Seller” and it definitely sounds like Omarosa Manigault Newman! The panel thinks Moth could be Karlie Kloss, Omarosa, Megyn Kelly, Elizabeth Smart, Elisabeth Hasselbeck or Kathy Griffin. Lots of guesses for the Moth!

8:50 p.m. — Last to the stage is the Sloth. The slow-moving creature has a few clues to share: Last week was one of the scariest things he’s ever done — just kidding! He’s a star. But he didn’t always feel that way. When he was young he moved to a new place with a new language. He didn’t fit in (we see a boom box) and eventually he got a reputation as a bad boy. We see a clue of “Maximum Velocity” and he says tonight he’s taking another chance and baring his soul on stage. Tonight Sloth is dancing to “Up Where We Belong” by Joe Cocker & Jennifer Warnes. He’s giving the panel a laugh as he does some choreography with a ribbon. Then a partner joins him and he definitely looks like he’s had some dance training. The panel is loving his use of ribbon props and he’s a great partner dancer. This guy is a pro, no doubt! Based on the clue of “Maximum Velocity” I think this is Maksim Chmerkovskiy. Ken calls Sloth his favorite performer on the series. His spoken clue is “Leading Man.” The panel thinks Sloth could be John Cusack, Jonathan Groff, Keegan Michael Key or Will Ferrell.

8:59 p.m. — The votes have been tabulated and it’s time for someone to be unmasked. The dancer coming out of costume tonight is the Moth! Before she unsmasks, the panel will make a few final guesses. Brian goes with Elizabeth Smart, Ashley guesses Jewel, Cheryl thinks Moth is Megyn Kelly, Ken says Karlie Kloss and Paula’s final guess is Kathy Griffin. Are any of them right? The Moth pulls off her mask to reveal herself as activist, speaker and best-selling author, Elizabeth Smart! Wow! I’m shocked by that. I was on the Omarosa bandwagon. Brian was right! That’s a wrap for the Group B playoffs. Cotton Candy, Sloth and Zebra will advance to the Super Six.