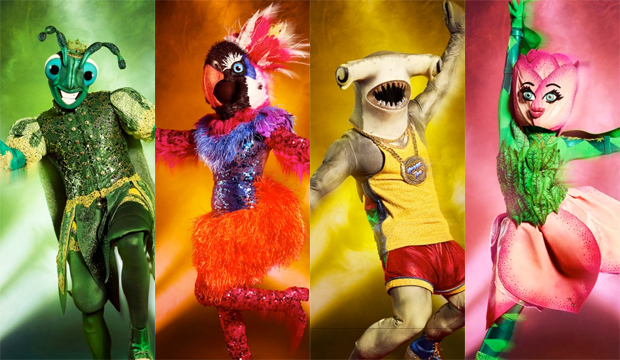 Heading into the Group A playoffs of “The Masked Dancer,” four contestants were still in the running to win the Diamond Mask trophy: Cricket, Exotic Bird, Hammerhead and Tulip. (Group B took the stage last week.) Each of these hop-steppers gave it their all on the stage on Wednesday night, but one was sadly eliminated and forced to reveal their true identity in front of America. Special guest judge Rob Lowe joined regular panelists Ashley Tisdale, Brian Austin Green, Ken Jeong and Paula Abdul this week. So which three advanced to the all-important Super Six?

Below, read our minute-by-minute “The Masked Dancer” recap of Season 1, Episode 4, titled “So You Think You Can Mask?,” to find out what happened Wednesday, January 20 at 8:00 p.m. ET/PT. Then be sure to sound off in the comments section about your favorite costumed characters on Fox’s reality TV show and who you think has what it takes to win the entire competition.

8:00 p.m. — “Previously on ‘The Masked Dancer’!” In the third episode, host Craig Robinson unmasked the Group B contestant with the lowest number of votes … Elizabeth Smart as Moth. “I live a pretty serious life [and wanted to] have fun,” the child advocate revealed in her exit interview about why she joined the show. But enough about last week — it’s time to eliminate one more person from Group A!

8:15 p.m. — The first competitor from Group A is the Exotic Bird. Here are a few clues about the feathered dancer: Every single day she’s on stage is a good day. In the last round her confidence was overflowing, but that wasn’t always the case. Right before the biggest opportunity of her life she got really sick with a savage bird flu. She could barely breathe and there was only one person who could help her — Mama Bird. We see a small statue of a football (Super Bowl performance?) and some apple pie. Tonight Exotic Bird’s performance matches the rollercoaster ride of her life. Dancing to “Latch” by Disclosure featuring Sam Smith, Exotic Bird is throwing herself into the choreography, which gets more complex as the routine goes along. This birdie has great rhythm, but I don’t think she’s a professional dancer by any means. Ashley calls her “flirty” and “enticing.” Before the official guesses, Exotic Bird gives a voice clue, “Number one.” The panel thinks Exotic Bird could be Janet Jackson, Jordin Sparks, Kate Hudson or Megan Thee Stallion.

8:27 p.m. — Tonight’s second performer is the Cricket. Here is a batch of new clues: His last performance, he dove into the performance head first. Tonight he’s turning up the energy with a 90’s style routine that brings him back to when he got his start. We see a banner that reads 1998. We see some athletic medals and a podium with Cricket standing in second place as he states, “When I was little I thought I had something special inside me. But you aren’t allowed to be different in the community I grew up in. I felt so judged.” We also see a “Super Phone” and a mention of “Back at One.” Tonight Cricket is dancing to “This is How We Do It” by Montell Jordan. He is doing the most basic moves possible and clearly isn’t used to entertaining a crowd with his moves. This might be entertaining at a wedding dance, but he will probably get unmasked for this performance. Ashley loves his swag and Paula picked up some old school moves, mentioning he’s not a trained dancer. He states that his confidence comes from his wife before the voice modulation is removed and we hear his real voice say, “All-star.” The panel guesses that the Cricket could be Adam Levine, Brian McKnight, Michael Phelps or Ryan Lochte.

8:40 p.m. — Third up is the Hammerhead. Let’s review the clues from this fishy dancer: The best part of this experience is being there on his own terms. But people already know the fun side of him, so this time he’s showing he has layers. Years ago, when he first entered the public eye, he had one shot. We see a vision test with a carrot and an apple, with jumbled words that could read “This is a huge clue.” We see him on stage with a microphone (looks more like a comedy club than a concert) when he states that he gave up his dream of becoming a lawyer and went through depression. He mentions being locked in a cage and we see a jersey with the number “1” on it. We also see a wedding cake (Were there two grooms on it?). Tonight Hammerhead is dancing to “Blinding Lights” by The Weeknd. This shark isn’t a great dancer, but he has some fun moves and at least knows how to entertain a crowd. There’s always an element of comedy when he dances and he even flubs up an attempted moonwalk. Not great, but he’s more fun to watch than the Cricket. Rob is stunned by the Hammerhead’s ripped body. Hammerhead’s voice clue is “Heartbreaker” and the panel thinks he could be Ryan Seacrest, Joe Rogan, Joe Jonas or Mike “the Situation” Sorrentino.

8:52 p.m. — The final dancer of the night is the Tulip. Here are some clues about the elegant flower: Last time we saw her she tapped like there was no tomorrow. She felt like a rock star. The toughest part of this competition is keeping mum to everyone around her. We see chalk and pyramids in Egypt. Tulip used to be super competitive with her best friend and was jealous of her successes. Eventually they put aside their differences and, day or night, her friend is always there for her through her struggles. We see Tulip growing into the sky and she mentions “Frozen” again. Tonight Tulip is dancing to “Fields of Gold” by Eva Cassidy. It’s a contemporary routine and Rob looks like he’s already in tears. This flower is really an incredible dancer and clearly a professional. She far exceeds the competition. Tulip’s voice clue is “Princess.” The panel thinks the Tulip could be Sarah Hyland, Hayden Panettiere, Kristen Bell, Charli D’Amelio or Simone Biles.

8:59 p.m. — It’s time for one of these dancers to be unmasked. The votes are tabulated and the performer with the least amount of votes who will have to reveal themselves to America is…the Cricket! That means Exotic Bird, Hammerhead and Tulip will advance to the Super Six. But before the Cricket reveals himself the panel must submit their final guesses: Ashton Kutcher (Ashley), Michael Phelps (Ken), Ryan Lochte (Brian and Rob) and Brian McKnight (Paula). Are any of them right? The Cricket rips off his mask and reveals himself to be 16-time Grammy Award nominee and R&B legend, Brian McKnight! Paula was right! Did you guess the singer was dancing in the Cricket costume? That’s a wrap for the Group A playoffs.