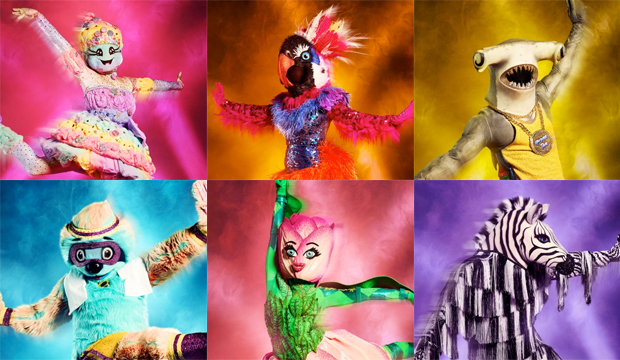 And then there were six. Cotton Candy, Exotic Bird, Hammerhead, Sloth, Tulip and Zebra survived the early group rounds on “The Masked Dancer” and returned this week as members of the Super 6. Each of these hop-steppers gave it their all on the stage on Wednesday night, but one was sadly eliminated and forced to reveal their true identity in front of America. Special guest judge Whitney Cummings joined regular panelists Ashley Tisdale, Brian Austin Green, Ken Jeong and Paula Abdul this week. So which handful of mystery dancers advanced to next week’s Top 5?

Below, read our minute-by-minute “The Masked Dancer” recap of Season 1, Episode 5, titled “Super Six,” to find out what happened Wednesday, January 27 at 8:00 p.m. ET/PT. Then be sure to sound off in the comments section about your favorite costumed characters on Fox’s reality TV show and who you think has what it takes to win the entire competition.

8:00 p.m. — “Previously on ‘The Masked Dancer’!” In the fourth episode, host Craig Robinson unmasked the Group A contestant with the lowest number of votes … Brian McKnight as Cricket. Paula was the only judge to guess the singer’s true identity. “Being anonymous was great because I don’t dance,” Brian McKnight revealed in his exit interview. But enough about last week — it’s time to get down with the Super 6!

8:09 p.m. — Let’s get ready to rumba! Cotton Candy is up first in the Super Six and here are a few new clues about this mouthwatering treat: She’s no stranger to competition, but this has been different. After her fall she wasn’t sure if she could even keep on dancing, let alone make it this far. Some haters in the past have said that Cotton Candy can’t dance (we see diamond rings configured like Olympic rings). She’s about to change their minds — and a little bonus clue is five gold balloons. Tonight Cotton Candy is dancing to “Great Balls of Fire” by Jerry Lee Lewis. This is a fun routine that shows off the colorful confection’s quick footwork and flexibility. She makes great use of her backup dancers in this flirty routine that includes a nice partner drop and acrobatics. I don’t expect Cotton Candy to be going anywhere tonight! Ken says Cotton Candy defines what “The Masked Dancer” is all about. Whitney thinks she is a professional dancer or a TikTok star. In a rapid fire question segment Cotton Candy admits ice plays a role in what she does, she has lots of tights, she can’t do what she’s known for doing in heels and she’s known for being physically fit. The panel thinks Cotton Candy could be Tara Lipinski, Jennifer Lopez, Kristi Yamaguchi, Gabi Butler or Simone Biles.

8:15 p.m. — Now it’s time for the Exotic Bird. Has she flown towards the Diamond Mask trophy or into a windshield? Here are a few clues: When this competition started she was super stressed (we see that famous Bernie Sanders meme, which makes me think she’s been at an inauguration). We also see the word “Legendary” and “XOXO” spray painted on a wall. She says she’s been made fun of before for her dancing, but when the music began all she felt was the rhythm. Life has really changed since she became a mama bird, but being under the mask has allowed her to rediscover her sultry side again. As a bonus clue we see a tattoo of a flower. Tonight the Exotic bird is dancing to “Rush” by Lewis Capaldi and Jessie Reyez. Starting off alone in a flowered cube, the colorful birdie is performing a contemporary routine and is eventually joined by a partner dancing around her. She pops out of the box, fluttering around the stage and begins to make Whitney get emotional on the panel. Whitney says she welled up watching the performance and she’s rooting hard for her. Brian thinks Exotic Bird is naturally very sensual. Paula believes the Exotic Bird has a new sense of confidence. In the rapid fire questions we learn she has been in a music video, appeared in a campaign ad and is no stranger to modeling. The panel believes Exotic Bird could be Kat Von D, Dita Von Teese or Ashley Graham. Ken guessed Kate Upton, but Whitney facetimed the model and squashed that guess, lol.

8:24 p.m. — Ready to light up the stage is the Sloth! He might not be new to the dance floor, but this show has made him step out of his comfort zone. It helps that nobody knows who he is, especially the judges. But he can’t wait for his family (which appears to be a wife and child) to find out. He’s going to do a new dance style every week to get to the trophy. As a super clue, we see the number 18. Tonight the Sloth is doing a Hollywood jazz routine to “Ain’t That a Kick in the Head” by Dean Martin. The sloth has held back throughout the weeks, but he’s clearly a professional dancer. He effortlessly glides across the stage and knows exactly how to work with a female partner. Most importantly, he’s a showman. Whitney was thrilled to see the Sloth and says he has a lot of athleticism. Paula saw a lot of Broadway showmanship and Ken called him a frontrunner. In his rapid fire question segment we learn the Sloth would be an elephant if not a sloth, the costume doesn’t put him at ease and it’s been hard for him to be away from his family. The panel thinks the Sloth could be Bradley Cooper, John C. Reilly or Sacha Baron Cohen.

8:33 p.m. — Next to the stage is Hammerhead and here are a few new shark clues: He can’t believe he made it to the Super Six. He may not be the best dancer, but he is loving this. Behind his mask he can finally let loose, and it’s liberating (we see a sign for Las Vegas). We see him dancing around on a map near New Jersey and his super clue is a bottle of tanning oil. Tonight Hammerhead is dancing a paso doble to “Don’t Let Me Be Misunderstood” by Santa Esmeralda. He sort of walks around, kneels, and walks around before finally partaking in some seriously basic partner work. Hammerhead isn’t a very good dancer, but he’s an entertainer and that’s what has gotten him this far. I’m not sure if he can survive the Super Six though. Whitney feels strongly that he’s not a professional dancer, but that’s what she finds endearing. In his rapid fire question round we learn Hammerhead is known for having a sense of humor, does not have stage fright, is not a solo act and has had a relationship in the public eye. The panel thinks Hammerhead could be Pauly D., David Dobrik, Mike “The Situation” Sorrentino or Vinny Guadagnino.

8:42 p.m. — It’s Tulip’s time to take the stage, but let’s listen in on a few clues first: Believe it or not, she’s never really enjoyed competing (we see judges hold up signs saying “not good enough”). Since being on the show she’s starting to fall in love with performing. She’s done tap and an emotional dance, but tonight she’s going back to one of the first dances she ever learned. As a super clue we see a framed picture of Tulip and her mother at the “2nd Annual Mother Daughter Dance.” Tonight Tulip is dancing a contemporary routine to “Thank U, Next” by Ariana Grande. She’s clearly a trained dancer because she moves effortlessly and nails any choreography thrown at her. Ashley says Tulip brought the stakes up even higher. Paula recognized ballet training and says Tulip is a born performer. In Tulip’s rapid fire questions we learn she hasn’t thought about retiring, she’s a pro at memorizing dialogue and running out of battery on her phone would be worse than running out of gas in her car. The panel thinks the Tulip could be Sarah Hyland, Simone Biles or Julianne Hough.

8:52 p.m. — Last up tonight is the crowd-pleasing Zebra. He admits he had two left feet even before he became the Zebra, but look at him now! At first wearing the mask freaked him out because he’s claustrophobic. We see a graham cracker with the letter “E” while he says being on “The Masked Dancer” has helped him regain a piece of his soul. He may not be the best dancer, but he loves it and plans to keep the fun Latin vibes going. His super clue is a t-shirt that says K.O. Tonight Zebra is dancing to “Mi Gente” by J Balvin and Willy William. He clearly struggles with rhythm, but he has a lot of fun and the tassels on his costume help add some pizazz to his routine. There was some good footwork near the end, but I think the elimination will come down to Zebra and Hammerhead. Paula says he blew her away tonight and Whitney thinks there’s a comfort on stage that can’t be faked. In his rapid fire question round we learned Zebra has acted, is known for a hook and has created music. The panel thinks the Zebra could be LL Cool J, Oscar De La Hoya or Floyd Mayweather.

8:59 p.m. — The votes are in and the Super Six dancer that wasn’t quite super enough is the Hammerhead. Before he reveals his true identity the panel will make their final guesses: Pauly D. (Ken, Whitney), Kevin Hart (Ashley), Mike “The Situation” Sorrentino (Brian) and David Dobrik (Paula). Are any of them right? The Hammerhead slowly pulls off his mask to reveal himself as “Jersey Shore” star Vinny Guadagnino! I guess Paula should have stuck with her guess earlier in the night!