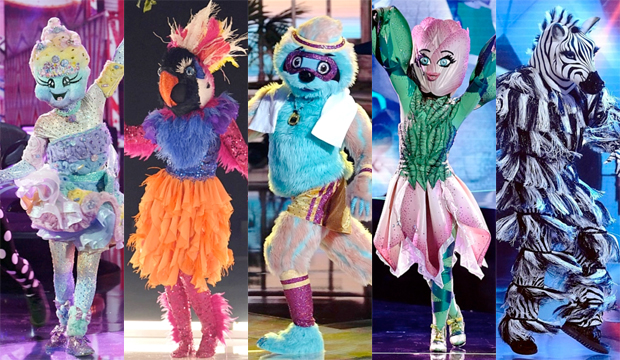 You can now count the number of remaining “The Masked Dancer” contestants on one hand. Cotton Candy, Exotic Bird, Sloth, Tulip and Zebra survived last week’s Super 6 showdown and returned this week as members of the elite Top 5. Each of these hop-steppers gave it their all on the stage on Wednesday night, but one was sadly eliminated and forced to reveal their true identity in front of America. Special guest judge Mayim Bialik joined regular panelists Ashley Tisdale, Brian Austin Green, Ken Jeong and Paula Abdul this week. So which mystery dancers advanced to next week’s Final 4?

Below, read our minute-by-minute “The Masked Dancer” recap of Season 1, Episode 6, titled “Top 5, Dance The Night Away,” to find out what happened Wednesday, February 3 at 8:00 p.m. ET/PT. Then be sure to sound off in the comments section about your favorite costumed characters on Fox’s reality TV show and who you think has what it takes to win the entire competition.

8:00 p.m. — “Previously on ‘The Masked Dancer’!” In the fifth episode, host Craig Robinson unmasked the Super Six contestant with the lowest number of votes … Vinny Guadagnino as Hammerhead. None of the judges guessed the “Jersey Shore” star’s true identity, though a couple of them came close by naming his reality co-stars. “I’m not a professional dancer, you guys nailed it,” Vinny proclaimed in his exit interview. But enough about last week — it’s time to get down with the Top 5!

8:10 p.m. — The dancing gets started with the Tulip. Here are a few clues from her dance partner: “I love spending time with the Tulip, she’s basically my new best friend,” he says while holding an iced coffee with a pink star on it. They have a super handshake they do before each performance and we see Tulip offering up a peanut butter and jelly sandwich. Tulip can pick up any dance style and work it, but it runs in the family (we see a family-sized bag of potato chips). Tonight the Tulip is dancing to “My Boyfriend’s Back” by the Chiffons. This is a sassy, fun routine that shows the Tulip jazzing it up around her bedroom. She effortlessly nails the choreography with sharp movements and high entertainment value. This was about as well choreographed routine I’ve seen this season. Ken said she had comedy, fun, heart and skill. Tulip reveals that she’s no stranger to the stage and she’s been performing her whole life. Her one-word clue tonight is “Lifetime achievements.” The panel believes the Tulip could be Liza Koshy, Haylie Duff or Jamie Lynn Spears.

8:20 p.m. — Up next we’re getting a visit from the Zebra. What does his dance partner have to say? He is more fun than we could imagine. We see a lunch bag with the price $19.92 while she says he’s a champion in his field. We also see a $1,000 bill with a bumblebee on it being dropped into a “For Good Will” bucket. Zebra has zero fat on his body and hard muscles. Although rehearsals started off rocky, the Zebra is a fighter and he has two countries cheering them on. Tonight Zebra is dancing to “Take You Dancing” by Jason Derulo. Zebra is sort of aimlessly jumping around the stage before shaking his tassels and joining his partner for a little ballroom work. At one point he gets a little lost and just stands there. He’s fun, but this is not his best dance. Mayim loved the sense of humor, energy and dedication. Zebra’s one-word clue is “author.” The panel thinks the Zebra could be Oscar De La Hoya, Conor McGregor or Barry Bonds.

8:30 p.m. — Here comes Sloth! His dance partner says he is funny and she’s seen him on tour — he’s a showman! In some ways it’s weird to be teaching him because he’s usually the leading man. She thinks he speaks three languages and he thinks he is “sex on a stick.” Tonight the Sloth is dancing to “Twist Remix” by Neeraj Shridhar. This is Bollywood style with a little fun robot thrown in. The Sloth knows how to move, but what’s more apparent is how he lifts his partner and throws her around with ease. He’s clearly done this before. This animal is a professional. Brian says the Sloth has more energy than the costume leads on to and he will be shocked if he’s not in the semi-finals. Sloth’s one-word clue is “rose.” When asked if he’s known for dramatic roles or comedy, the Sloth says he’s all drama. The panel believes the Sloth could be Harry Shum Jr., Hugh Jackman or Jack Black.

8:40 p.m. — Exotic Bird is up next and she’ll be dancing to one of Paula’s classic tunes. Her dance partner has always been a big fan of hers and we see a calendar with Mondays circled. Each performance he has pushed her limits and she’s gone above and beyond. We see an airplane and a Santa Claus statue. We see a jersey with the number 23 on it before Exotic Bird takes the stage, which includes a diner with the number 6. Exotic Bird is dancing to “Opposites Attract,” which includes some fun, seductive chair dancing. She’s upped her game since last week and I think this is actually my favorite performance of the night! Brian said she deserves a spot in the semi-finals and Mayim’s childhood dream has come true, listening to a Paula Abdul song while sitting next to Paula Abdul. Her one-word clue tonight is “Circus.” The panel thinks the Exotic Bird could be Khloe Kardashian, Eve or Jordin Sparks.

8:50 p.m. — Last up tonight is Cotton Candy. Her dance partner says she is “so inspiring” as we see Cotton Candy wearing a gold watch set to 3:00 p.m. We see a red, white and blue sash that says “Miss Perfect” on it. Every night after rehearsals Cotton Candy goes for a three mile run in her mask, just so she can get used to it. For anyone else, her week one fall might have been rock bottom, but she vaulted back to her feet like a hero. Tonight Cotton Candy is doing a ballet routine to “Swan Lake Opus 20. Acto I Finale” by Tchaikovsky. She dances through backstage and eventually gets in front of the panel, mixing some classic ballet with hip-hop. It’s fun, yet complicated at the same time and I think Cotton Candy just made herself the one to beat. Ken calls her innovative and original. Paula is impressed with her beautiful, funky movements. Cotton Candy’s one-word clue tonight is “prayer.” The panel thinks Cotton Candy could be Kristi Yamaguchi, Simone Biles or Hayden Panettiere.

8:59 p.m. — The votes are in and the dancer NOT moving on to next week’s semi-finals is the Exotic Bird! Wow! I thought she was great tonight, that’s too bad. Before she reveals herself, we learn the Exotic Bird is taller than Ken, is used to performing in front of large crowds, may have won a major award, has been on the cover of a magazine and has met Paula. The panels final guesses are: Jennifer Hudson (Ken), Eve (Mayim), Ashley Graham (Brian) and Jordin Sparks (Paula and Ashley). Finally the Exotic Bird pulls off her mask and reveals herself to be Grammy nominated singer/songwriter Jordin Sparks! Ashley finally got one right! That’s a wrap for tonight. Cotton Candy, Sloth, Tulip and Zebra will advance to the semi-finals.