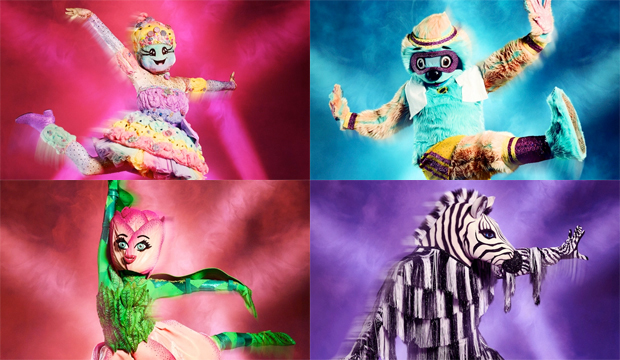 After six shocking eliminations, only four secret celebrities remained in the running to win Season 1 of “The Masked Dancer”: Cotton Candy, Sloth, Tulip and Zebra. This fearsome foursome survived their initial group rounds, the Super 6 showdown and last week’s elite Top 5. All bets were off on Wednesday night as each of these hop-steppers took to the stage in front of special guest judge Will Arnett and regular panelists Ashley Tisdale, Brian Austin Green, Ken Jeong and Paula Abdul. So which mystery dancers advanced to next week’s Top 3, and who was forced to unmask in front of America?

Below, read our minute-by-minute “The Masked Dancer” recap of Season 1, Episode 7, titled “Semifinals — It’s All About The Dance,” to find out what happened Wednesday, February 10 at 8:00 p.m. ET/PT. Then be sure to sound off in the comments section about your favorite costumed characters on Fox’s reality TV show and who you think has what it takes to win the entire competition.

Keep refreshing/reloading this “The Masked Dancer” live blog for the most recent updates.

8:00 p.m. — “Previously on ‘The Masked Dancer’!” In the sixth episode, host Craig Robinson unmasked the Top 5 contestant with the lowest number of votes … Jordin Sparks as Exotic Bird. Both Paula and Ashley correctly named the former “American Idol” singer, adding points to their season-long tallies. “I can show my son that it’s okay to do things that scare you,” Jordin proclaimed in her exit interview. But enough about last week — it’s time to get down with the Final 4!

8:16 p.m. — In their first ever group number, the semifinalists take the stage for a fun routine that really proves Zebra is the worst dancer, yet somehow one of the most fun to watch. This week celebrates Valentine’s Day and what better way to kick things off than with Cotton Candy? She can’t believe she’s made it to the semifinals, but she’s nervous about tonight’s theme. Love has always taken a back seat in her life because she started her career when she was six years old (we see a supergirl cup) and before she knew it four years of her life just flew by. We see a nametag that says “Boss” and she obviously travels a lot. Dancing to “Get Ready” by 2 Unlimited, Cotton Candy is giving us an energetic routine that looks like something you’d see from a dance squad for an NFL cheer time. Things get even more fun when the song transitions to “Hey Mickey” and Cotton Candy is sure to sail into the finals. Ken says she is really peaking at this point and she clearly has a competitive spirit. Will was impressed with her athleticism (she even completed a front walkover). Cotton Candy then reveals she is directly tied to Will, who gave her love on “The Masked Singer,” so she’s going to give him love on “The Masked Dancer.” Will remembers guessing T-Rex was Tara Lipinski, so that’s his guess for Cotton Candy. In her one word clue, she says, “Covergirl.” The panel thinks Cotton Candy could be Simone Biles or Gabby Douglas.

8:28 p.m. — It’s Sloth’s turn to fight for his spot in the finale. He says the semifinals aren’t bad for a slightly overweight Sloth and he never thought dancing would get him here. But then again, he never thought it would find him true love, but both happened! When he was younger he was kind of a bad boy, even a ladies man. There were incredible leading ladies (we see a figure skater, a panda bear and some jar of something I can’t figure out — brown sugar in a jack-o’-lantern jar? But he was lonely until he met the love of his life, who taught him that love is magic (we see a stethoscope). We also know he’s won a trophy before. Tonight the Sloth is doing a samba to “Dancing With a Stranger” by Sam Smith and Normani. He starts off with a sexy, yet funny hip thrust before his partner joins him for serious movement. He spends a lot of time in character, but as soon as he gets serious about his dance he really proves he’s probably the best dancer on the show, at least in the ballroom genre. Ashley says his performance was “so much fun” and calls him the one to beat. Paula calls him “impeccable.” The Sloth gives his valentine to Brian and states “Who would have thought one of your co-stars would have been one of my co-stars?” For his one-word clue he adds, “App.” The panel thinks the Sloth could be Patrick Dempsey, Max Chmerkovskiy or Val Chmerkovskiy.

8:40 p.m. — The Zebra is ready to razzle-dazzle us all next. He’s genuinely surprised he’s still here because the other dancers are so talented. He admires himself in a mirror that has a note reading “OK” on it. But when it comes to heart, nobody can beat him. We see cowboy boots rise out of a gold cup and, despite what people might think, he has a huge heart. There is a visual of him getting engaged and we also see “XX Holly” carved into a tree. He’s also seen boxing before he says many years ago he lost someone very special to him. Growing up, she was the center of his world and he was devastated. Now he does everything he can to raise awareness and be a part of the cure. We see him drive a car with a license plate reading “510.” Tonight he’s dancing to “Mack the Knife” by Bobby Darin and it’s inspired by a Las Vegas casino. He fancy-foots across the stage with his signature flare and clear lack of training, but once again brings a smile to the panelists’ faces. Will compliments his determination and body language. He gets an athlete/fighter vibe from the hoofer. The Zebra gives his valentine to Paula, stating, “You gave me a shout-out online and now I’m giving you a shout-out to say ‘I love you.'” When she asks if they’ve taken a picture together, Zebra confirms they have. For an additional one-word clue, Zebra says, “Box office.” The panel guesses the Zebra could be Mike Tyson, The Miz or Oscar De La Hoya.

8:50 p.m. — The Tulip will wrap things up tonight and her armpit appears to have an iceberg in it. She’s pretty sure she’s the youngest left in the competition, some things never change. But through it all the one person she truly misses is her best bud. She may have taken home more trophies than her, but they’re best friends. We see pictures of their “crushes,” BTS, Harry Styles and Justin Bieber. An envelope appears to have a “D” on it and it looks like there are also a couple candied apples. Tulip is dancing a traditional polka and it’s a fun change of pace! There is a ton of footwork and it’s by far the most complex dance of the night. Will compliments her natural ability and athleticism. Ken calls her the most technically proficient dancer in the competition. Tulip’s valentine goes to Ashley and she reads, “I’ve danced to ‘High School Musical’ for over 10,000 hours.” Tulip’s one-word clue is “Butterflies.” The panel thinks the Tulip could be Mackenzie Ziegler, Noah Cyrus, Dove Cameron or Liza Koshy.

8:59 p.m. — The dancer with the least amount of votes and forced to unmask in front of America is the Zebra. In the Q&A we learn millions of people have seen him on TV, he “did” perform a lot in Las Vegas, he has a special lady in his life, he’s taller than Ken and he has a major award on his mantle. The final guesses are: The Miz (Ken), Conor McGregor (Ashley), Floyd Mayweather (Paula) and Oscar De La Hoya (Brian and Will). At last the Zebra pulls off his mask and reveals he is indeed boxing champion and Olympic gold medalist, Oscar De La Hoya! That’s a wrap for the semi-finals and Cotton Candy, Sloth and Tulip will compete in the season finale in next week’s 2-hour battle for the Diamond Mask trophy.