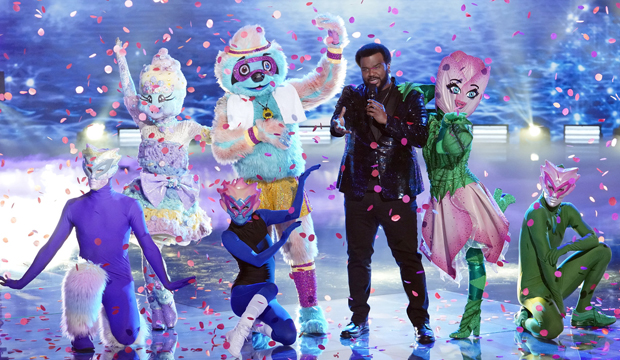 The highly anticipated Season 1 finale of “The Masked Dancer” aired Wednesday night on Fox, with Cotton Candy, Sloth and Tulip fighting it out for the Diamond Mask. The eight-week road to the finale was full of many twists and turns, but were the panelists (Ashley Tisdale, Brian Austin Green, Ken Jeong and Paula Abdul) able to correctly guess the true identities hiding behind the Final 3 costumes? Based on Gold Derby’s predictions, Cotton Candy had the best chance of taking home the coveted trophy, followed by Sloth in second and Tulip in third. Did our readers’ odds pan out, or was there a surprise winner?

Below, read our minute-by-minute “The Masked Dancer” recap of the Season 1 finale, titled “The Finale – One Last Mask,” to find out what happened Wednesday, February 17 at 9:00 p.m. ET/PT. Then be sure to sound off in the comments section about your favorite costumed characters on Fox’s reality TV show and who you think has what it takes to win the entire competition.

Keep refreshing/reloading this “The Masked Dancer” live blog for the most recent updates.

9:00 p.m. — “Previously on ‘The Masked Dancer’!” In the seventh episode, host Craig Robinson unmasked the Top 4 contestant with the lowest number of votes … Oscar De La Hoya as Zebra. “It was probably the best experience I’ve ever had,” said the boxing legend and two-time Olympic Gold medalist during his exit interview. Brian was the only panelist who correctly guessed the Zebra’s true identity, tying him with Paula at two points apiece. But enough about last week — it’s time to find out the finishing order of the Final 3!

9:10 p.m. — To kick off the ceremonious end to the first season of “The Masked Dancer,” Craig serenades the final three in a group performance to “I’ve Had the Time of My Life.” Then the competition gets started with the Tulip. Now that she’s in the finals she is realizing how much she’s blossomed. From the very start she came out with something to prove, so she showed off all her dance skills. Being the youngest in a talented family, it’s easy to feel overshadowed by the person she looks up to the most. But now she’s proven she can shine on her own. For her grand finale, Tulip is pulling out all the tricks to prove she’s the queen of the dance floor. Dancing to “Kings & Queens” by Ava Max, Tulip emerges from a flowered throne, engaging a partner for some ballroom dancing before flipping around the stage like a pro and even showing off a few ballet moves. She’s really leaving it all on the dance floor! She really packed a lot of technique into one performance and entertained the audience with a fun, upbeat performance. “That is how you kick off the finale!” exclaimed Brian. Ashley calls her performance “epic” and Paula compliments a bunch of moves I could probably never spell correctly. For her final one-word clue, Tulip says, “Followers.” The panelists think it over and guess the Tulip could be Lucy Hale or Mackenzie Ziegler. In total, they have guessed 14 various celebs throughout the season.

9:20 p.m. — Sloth is up next in tonight’s finale and admits he waltzed in like a pro. This is his first time dancing with a partner where he gets to be the student, but what he loves most is performing without any pre-judgment of who he is. Now he’s a good guy who can show his baby Sloth he’s a big softie; but he still takes pride in his strong muscles. Tonight he’s hoping to jive his way to victory with a dance to “Ballroom Blitz” by the Struts. This is a high-energy performance that incorporates his comedic flare but also allows him to show off his ballroom proficiency. For as talented as he is, I feel like he misses opportunities to max out his dancing with so many comedic breaks, but maybe the audience will respond to that? Ken says the Sloth has entertained us all season and Paula calls him “brilliant.” His final one-word clue is “Magical.” The panelists guess the Sloth could be Hugh Jackman or Channing Tatum. In total, they have guessed 16 various celebs to be the Sloth this season.

9:30 p.m. — Cotton Candy is up last and she says before “The Masked Dancer” her world was full of judgment. This experience has been life changing and she’s never felt more powerful, but not everything has been a perfect “10.” Hard days are when champions are made and she is a champion! Being in the finals has sparked a fire in her to win this whole thing, so for her final performance she’s bringing something to the table nobody else can. Dancing to Kesha‘s version of “This is Me,” Cotton Candy starts under a spotlight before falling into her partners arms and then tumbling across the stage. She’s not afraid to just make it clear she’s a gymnast at this point. It’s all or nothing! It can’t be easy doing this with a big mask on your head. She caps it off with a bouquet of balloons raising her off the floor in a final acrobatic, show-stopping move. That’s going to be hard to beat! Her final one-word clue is “Foundation.” The panelists think Cotton Candy could be Michelle Kwan, Gabby Douglas or Simone Biles. In total, they have guessed 11 various celebs to be Cotton Candy.

9:38 p.m. — The votes are in and third place dancer is Tulip! That’s a bit of a surprise to me, but she was third place in our Gold Derby odds, so it shouldn’t be! Before she unmasks the panelists give their final guesses: Liza Koshy (Paula), Lucy Hale (Ken), Sabrina Carpenter (Brian) and Mackenzie Ziegler (Ashley). At last, Tulip pulls off her mask and reveals herself to be…actress, singer and social media influencer, Mackenzie Ziegler!

9:50 p.m. — It’s time to find out who won “The Masked Dancer” and who came in second place. The winner of Season 1 is Cotton Candy! Congrats to her! She’s the queen of “The Masked Dancer,” but first we have to find out who the Sloth is. The runner-up is guessed to be: Maksim Chmerkovskiy (Paula and Brian), Channing Tatum (Ken) or Hugh Jackman (Ashley). The Sloth finally pulls off his mask and reveals him to be “Dancing with the Stars” pro Maksim Chmerkovskiy!

9:59 p.m. — It’s finally time to reveal the winner of the first Diamond Mask trophy. Cotton Candy gets choked up when talking about her amazing journey on this show. Before she unmasks the panelists announce their final guesses for who they think Cotton Candy is: Tara Lipinski (Brian), Michelle Kwan (Ken), Gabby Douglas (Paula) or Simone Biles (Ashley). It’s now the moment we’ve all be waiting for, the unmasking of the first champion. And Cotton Candy is Olympic gold medalist Gabby Douglas! Not only is Gabby a winner, but Paula overtakes the other panelists to become the smartest of them all, with four correct guesses this season. Congrats to Gabby!