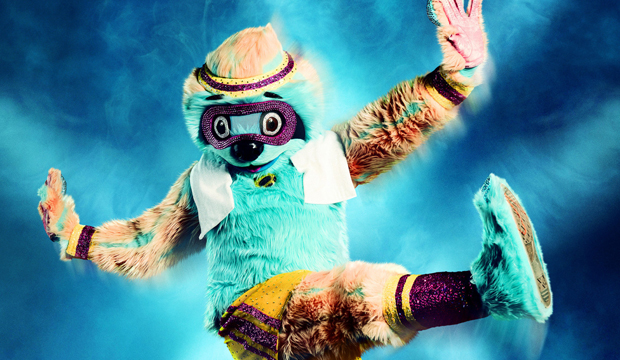 “The Masked Dancer” finale on February 17 will be a battle between the three celebrities who are disguised as Cotton Candy, Sloth and Tulip. Of this trio of talent, the strongest dancer is the contestant hidden inside the Sloth costume. From the style of his dancing, the clues he gave in his videos and his conversations with the four judges (Paula Abdul, Brian Austin Green, Ken Jeong and Ashley Tisdale) we are sure we know the real name of the Sloth. Keep reading if you dare for all of “The Masked Dancer” spoilers for the season 1 finale.

From his debut on episode 2, when the Sloth ruled the stage with his electrifying routine set to “What I Like About You” by The Romantics, we’ve been certain that he was a professional dancer. We became even more sure as the weeks went on and he nailed each successive appearance capped off by his show-stopping performance of “Dancing With a Stranger” by Sam Smith featuring Normani on the February 10 semifinal. We are now more convinced than ever that we know the real name of the Sloth.

We are sure that the Sloth is Maksim Chmerkovskiy who came to fame as a partner on “Dancing With the Stars” for 17 seasons.

In his most recent appearance, the Sloth revealed he never thought he could make a career out of dancing or that it would be the way he found his true love. In the second clues video, we saw the Sloth propose to one of the other dancers. Maksim married another “DWTS” pro, Peta Murgatroyd, in 2017. The Sloth says he has “a very special love for The Nutcracker”; Tchaikovsky’s music for this beloved ballet was played at their wedding. In the third clues video, the Sloth says he is missing his family; he and Peta welcomed a son, Shai Aleksander, on January 4, 2017.

Early on in the competition, the Sloth admitted he was not new to the dance floor and said he’d do a new dance style every week to get to the trophy. This is just what Chmerkovskiy did on “Dancing with the Stars.”  He and his various partners made it to”DWTS” final five times. Max finally won in season 18 (that number was given as a super clue for the Sloth) with his partner, Olympic ice dancer Meryl Davis (her initials were seen in a clues video). Their trophy was a mirrorball. That was shown in two parts — mirror and ball — in the second clues video. And the show’s initials were referenced as well with a shot of the Dentist Whitening Tooth System – DWTS.

Four of Maksim’s other partners on “Dancing with the Stars” were referenced in two clues video: GLEEm toothpaste for “Glee” star Heather Morris (season 24); “D.R.” for actress Denise Richards (season 8); a bug embedded in amber for model Amber Rose (season 23); and a red Solo cup with the number “13” for soccer player Hope Solo (season 13)

The Sloth’s partner says he speaks three languages. Chmerkovskiy was born in the Ukraine, and speaks his native country’s language as well as Russian and English. Ukraine has a blue and yellow flag (we saw those colors in the first clues video.) Chmerkovskiy has been dancing since he was four. However his dreams of dancing professionally were almost shattered when he was 13 and broke his right leg skiing; the Sloth said he had an childhood accident that was a challenge to overcome.

Before joining “DWTS” in season 2, Chmerkovskiy competed at the professional level in the International Latin category and won 10 titles; as a group, “The Masked Dancer” contestants can brag of 11 such world titles.

As a group, “The Masked Dancer” contestants have starred on Broadway three times; Maksim appeared in “Burn the Floor” in 2009 and “Forever Tango” in 2013. That former show was referenced with the image of the burning room in the clues video. (Jordin Sparks, who was the Exotic Bird, accounted for the third appearance.)

The Sloth is certainly one of the most athletic of the 10 contestants on season 1 of “The Masked Dancer.” His costume consists of workout gear and he was able to leap and bound around the stage.

We will only find out for sure that Maksim Chmerkovskiy is the Sloth when he is unmasked. That will only happen if he loses a match-up or wins the competition. Do you think we are right about the real name of the Sloth? Sound off in the comments section with your best guesses.