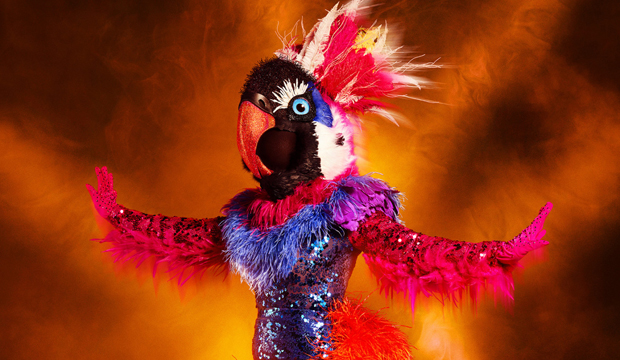 Exotic Bird soared onto the series premiere of “The Masked Dancer,” shaking her tailfeather to the delight of panelists Paula Abdul, Brian Austin Green, Ken Jeong and Ashley Tisdale. The feathered showstopper confidently dominated the stage in her opening number and proved she wouldn’t be migrating from the competition after flying high in the Group A playoffs. After securing her spot in the Super Six, Exotic Bird is flapping her way towards the Fox reality TV dancing competition’s Diamond Mask trophy.

Exotic Bird delivered her first performance in Episode 1, wowing the panel with an exciting routine to “Con Calma” by Daddy Yankee and Katy Perry. Her statuesque physique and mobility led the panel to believe the Exotic Bird could be a professional athlete. She kept things moving in Episode 4, upping the choreography complexity to “Latch” by Disclosure featuring Sam Smith. Ashley called her a “flirty” and “enticing” birdie and was certain the Exotic Bird was a seasoned performer.

In her various clue packages we have gotten multiple hints as to who Exotic Bird truly is. We saw her on a racetrack, but she was wearing heels while saying she’s been competitive since she was a teenager. There were clues implying she may have a perfume line and she admitted to feeling attacked for losing. Exotic Bird revealed that she fell ill before the biggest opportunity of her life and various clues have connected her to football. Last, some apple pie may have hinted that this performer is all American.

With each passing performance the panelists seem to inch closer to guessing Exotic Bird’s identity. They are convinced she’s no stranger to energizing a crowd, but seem conflicted as to whether she is a professional athlete or a high-profile singer. Some of the famous faces they have claimed Exotic Bird to be include athletes Marion Jones, Hope Solo and Venus Williams and singers Jennifer Hudson, Janet Jackson, Jordin Sparks and Megan Thee Stallion.

The celebrities that failed to keep up with Exotic Bird from Group A were Ice-T as the Disco Ball and Brian McKnight as the Cricket. Hammerhead and Tulip will join Exotic Bird in the Super Six from Group A along with Cotton Candy, Sloth and Zebra from Group B. The Super Six will take the stage on Wednesday, January 27. Do you think Exotic Bird has what it takes to soar to the Diamond Mask trophy?