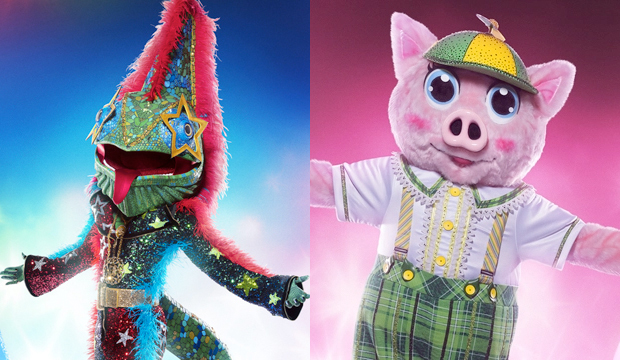 This week’s Top 4 episode of “The Masked Singer” will feature the elimination of either Chameleon or Piglet, according to Gold Derby’s predictions. Our readers have been making their picks all season long and these two creatures are the likeliest to be eliminated during the semifinals, airing Wednesday, May 19 on Fox. The other two contenders, Black Swan and Yeti, should easily sail into the Season 5 finale. Do you agree or disagree with our racetrack odds? Be sure to make your own predictions and then defend your choice in the comments section.

Here are the most current “The Masked Singer” elimination predictions for the semifinals:

Chameleon has had Jenny and Nicole Scherzinger “swooning” ever since the they first saw him sing and dance in the debut episode of Season 5. Jenny McCarthy proclaimed, “You have this beautiful tone in your voice. I would buy that album tomorrow with you singing on it.” As for why he did the show, Chameleon confessed he loves being in front of people, whether it’s “on stage or in your home.” The celebrity sleuths are convinced he’s a real-life hip hop artist, but which one?

The colorful gecko’s song book thus far has included these tunes: “Ride Wit Me” by Nelly, “21 Questions” by 50 Cent, “It’s Bigger Than Hip Hop” by Dead Prez, “Regulate” by Warren G, “Put Your Hands Where My Eyes Could See” by Busta Rhymes and “Drop It Like It’s Hot” by Snoop Dogg ft. Pharrell Williams.

Piglet, who’s thought to be a boy band member from the 1990s, has been sizzling from his first appearance on the reality TV show. “Wow, I did not expect that,” Ken Jeong proclaimed after watching the oink-meister effortlessly frolic around the stage, as if it were made of mud. “If Season 5 is a game changer, quite frankly, game over. You are amazing. Great job.” Piglet has called the experience “an adrenaline rush,” admitting he loves it because he’s “a ham” who loves being on stage.

The pink, suspenders-wearing schoolboy has taken on these classics so far: “Speechless” by Dan + Shay,”Good to Be Alive (Hallelujah)” by Andy Grammer, “7 Years” by Lukas Graham, “The Pretender” by Foo Fighters, “Against All Odds (Take a Look at Me Now)” by Phil Collins and “Superstition” by Stevie Wonder.