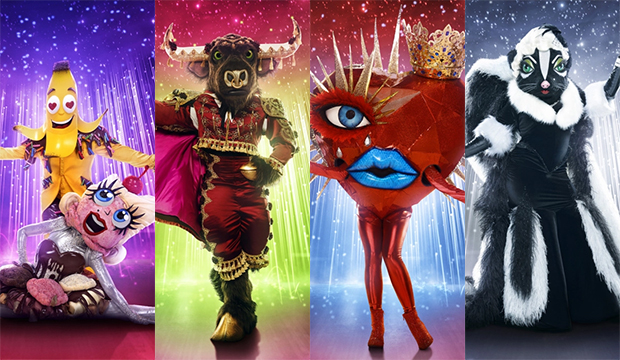 After eight weeks of competition and over three dozen thrilling performances, Season 6 of “The Masked Singer” has reached the Final 4. For the first time ever, each quirky character will go head-to-head against their biggest rival when Bull faces Skunk in the Group A final on December 1 and Banana Split takes on Queen of Hearts in the Group B final on December 8. The winner of each group will then compete against each other for the first time in the season finale on December 15 before host Nick Cannon announces the winner.

Here are the 12 contestants eliminated so far: Dwight Howard as Octopus, Vivica A. Fox as Mother Nature, Toni Braxton as Pufferfish, Tyga as Dalmation, Larry the Cable Guy as Baby, Ruth Pointer as Cupcake, Rob Schneider as Hamster, Honey Boo Boo & Mama June as Beach Ball, Johnny Rotten as Jester, Natasha Bedingfield as Pepper, Willie Robertson as Mallard and Bobby Berk as Caterpillar. So who has the best chance to follow in the footsteps of T-Pain (Monster), Wayne Brady (Fox), Kandi Burruss (Night Angel), LeAnn Rimes (Sun) and Nick Lachey (Piglet) and become the next winner? View our Final 4 power rankings below.

It may sound cliché, but Queen of Hearts just has a little more heart to her than the other contestants. Her magical tone never fails to captivate the audience and at one point Jenny called her the best artist they’ve ever had on the show. Whether she’s singing a contemporary dance song, a French classic, an pop/rock banger or a country standard, Queen of Hearts delivers an emotional punch that sends chills down the spine. Her ability to mix up genres always leaves us guessing and waiting for more.

2. Bull
(“Drops of Jupiter” by Train; “What Hurts the Most” by Rascal Flatts; “Circus” by Britney Spears; “Make You Feel My Love” by Bob Dylan; “Rain on Me” by Lady Gaga & Ariana Grande)

Despite his stature, nobody is lighter on their feet than Bull. His ability to deliver a full dance routine and back it up with killer vocals makes this beast the best overall entertainer in the competition. Each week he surprises the audience with dynamic stage antics and soulful interpretations of any musical genre. If he reaches the finale and comes up with another unforgettable dance routine he may just be hoofing it all the way to the winner’s circle.

SEE‘The Masked Singer’ judges get an ‘F’ for their Season 6 guesses — only 2 (!) correct out of 12 unmaskings

Banana Split wants to win badly and their competitive edge gives them a chance to do so. Like Bull, this tasty dessert focuses on a full entertainment experience rather than just vocals. They’re known for fun stage antics to accompany the beautiful voice of Ice Cream. Why is Banana there? We’re not exactly sure, but it makes for a fun, flirtatious vibe on stage. When the pressure is on, there is no telling what these two might come up with to win that trophy.

This soulful diva has been Robin’s favorite from the beginning and gives spine-tingling performances each week. Although she’s the most powerful voice on the show, her music choices are less diverse and she doesn’t quite work the stage like the other contestants. There have been other seasons where her voice alone would have carried her to the winner’s circle, but it will take more to win Season 6. Unfortunately for this stinker, having the best voice doesn’t always get you the crown.