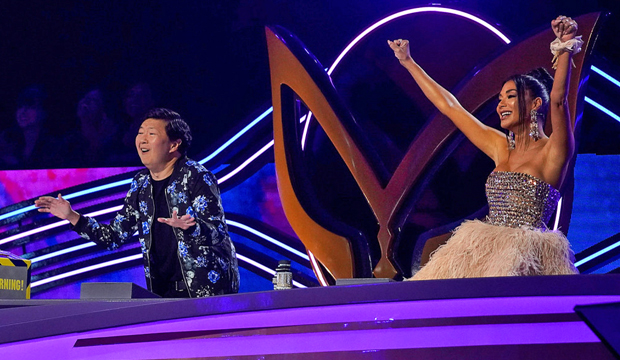 All throughout this season, the battle at the judges’ table for “The Masked Singer” Golden Ear has been hard-fought, but with just one episode to go, we still don’t have ourselves a front-runner. Nicole Scherzinger and Ken Jeong are currently tied at two first impressions apiece after they both correctly named David Foster & Katharine McPhee as Banana Split in the Group B Finals. Nicole previously guessed Natasha Bedingfield as Pepper, while Ken got on the board for picking Dwight Howard as Octopus. Below, see the Golden Ear updated point totals for Season 6.

Jenny McCarthy also got the Banana Split correct during Wednesday’s penultimate episode, but that was shockingly her first correct impression of the sixth season. Of course, Jenny already has two Golden Ears on her mantel for her stellar work in Seasons 4 and 5, the first two times the award was handed out.

Remember, if a panelist changes their guess and ends up being right, they don’t receive a point toward the Golden Ear trophy. Only their first impressions count, and they write those down after seeing a costumed character perform for the very first time. Their predictions are then locked away in a vault until that specific performer is eliminated. So even if Robin had followed the lead of his fellow panelists and switched his guess for Banana Split, it wouldn’t have affected his score.

Next week, the winner of Group A (Bull) and the winner of Group B (Queen of Hearts) will compete head-to-head for the Golden Mask. Whoever prevails will join the show’s iconic winners list that consists of such big names as T-Pain (Monster), Wayne Brady (Fox), Kandi Burruss (Night Angel), LeAnn Rimes (Sun) and Nick Lachey (Piglet).