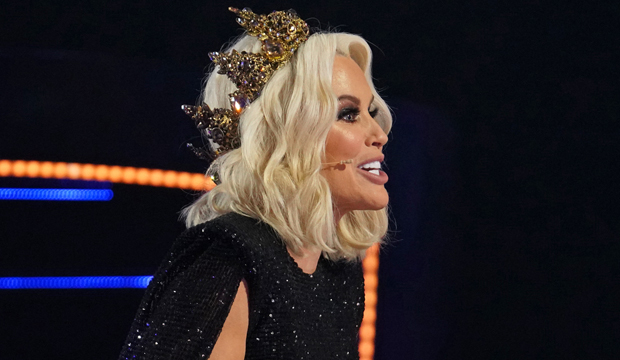 The Season 5 finale of “The Masked Singer” is upon us, with only three contestants still in the running to win the Golden Mask: Black Swan, Chameleon and Piglet. But forget about that main competition for a moment. There’s another, more cutthroat, battle going on at the judges’ desk to see which panelist will end the season holding the Golden Ear. Last year’s inaugural trophy was awarded to Jenny McCarthy, so it’s no surprise to see her at the top of the pack again this time around. However, she’s actually tied for first place with a judge who’s notoriously known for being a terrible guesser, Ken Jeong.

Both Jenny and Ken correctly named Caitlyn Jenner as Phoenix and Bobby Brown as Crab earlier in the season, giving them two points apiece. Remember, if a judge’s final guess comes true, they don’t get a point. It’s all about their first impressions, which they write down on paper after seeing a celebrity’s debut performance. These predictions then get sealed away in a vault, where they’re kept safe until that contestant eventually unmasks.

In Seasons 1-3, no such trophy was handed out. In Season 4, which aired in Fall 2020, Jenny won the Golden Ear thanks to savvily predicting the secret identities of Gremlin (Mickey Rourke), Lips (Wendy Williams), Squiggly Monster (Bob Saget) and Crocodile (Nick Carter) as her first impressions.

“My dreams came true! I won,” Jenny said on social media after proving victorious last season. “I’m the first recipient of the Golden Ear trophy on ‘The Masked Singer.’ I am so honored, and let me just say, I accepted this humbly because I didn’t want to hurt my fellow panelists’ feelings.” The camera then cut away to Jenny shouting excitedly when she thought she was in private.