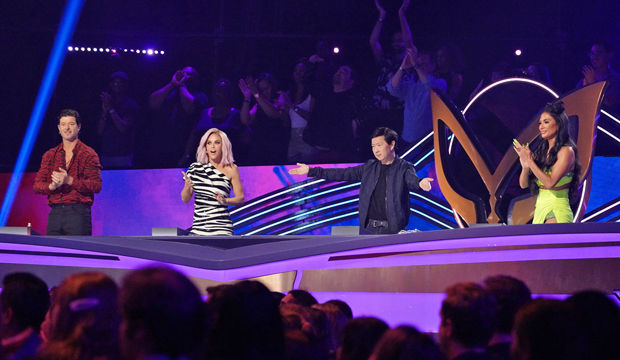 There’s no easy way to say this. “The Masked Singer” judges are earning a failing grade for their Season 6 guesses. Each week, Robin Thicke, Jenny McCarthy, Ken Jeong and Nicole Scherzinger put their best foot forward in trying to figure out the true identities of the celebrities hiding behind extravagant costumes. But of the 12 unmaskings so far in the sixth season of Fox’s reality TV show, the panelists have only correctly guessed two as their first impressions: Nicole pegged Natasha Bedingfield as Pepper and Ken named Dwight Howard as Octopus. That’s only a 16.67% accuracy rate, otherwise known as an “F.”

Because of their savvy guesses, Nicole and Ken have both earned one point toward the Golden Ear trophy for Season 6. Neither of them have won the coveted honor before, with Jenny claiming victory in Season 4 (the first year it was created) as well as Season 5. “I’m out for blood this season,” Nicole stated earlier this season. All she needs is one more point to take the lead, and she’s previously hinted she indeed knows the identity of Bull but that she’s keeping it secret until he’s eliminated. The other finalists are Skunk, Banana Split and Queen of Hearts.

This year, “The Masked Singer” introduced a new wrinkle to the show to try to boost the panelists’ Golden Ear point totals: the Take It Off buzzer. If a judge knows who’s hiding underneath a costume, they can hit the buzzer and declare the name at any point in the competition. A correct guess would give them two points toward the Golden Ear (and send the celeb home), while an incorrect guess would earn them a punishment. However, the buzzer was a big goose egg as it resulted in two wrong guesses — Ken thought Pepper was Sara Bareilles and Jenny thought Caterpillar was Jake Gyllenhaal.

Among the many celebs that the judges got wrong this year were Vivica A. Fox as Mother Nature, Toni Braxton as Pufferfish, Tyga as Dalmation, Larry the Cable Guy as Baby, Honey Boo Boo & Mama June as Beach Ball, Johnny Rotten as Jester, Willie Robertson as Mallard and Bobby Berk as Caterpillar. On two other occasions, the panelists made last-minute switches to their first impressions and ended up being right, but they didn’t score any points — Nicole switched to Ruth Pointer for Cupcake and Jenny switched to Rob Schneider for Hamster.