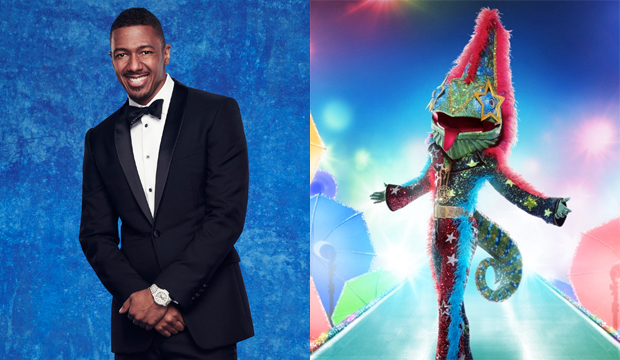 During the second episode of “The Masked Singer” Season 5, Nicole Scherzinger wonders if we all might be getting pranked. The panelist theorizes that since this is the so-called “game-changing season” of Fox’s reality TV show, host Nick Cannon — who’s apparently out sick with Covid-19 — might be hiding inside the Chameleon costume. Personally, I had a similar thought back in February when the story broke that Cannon would be replaced by Niecy Nash for the first half of the season. Is this all just a fun ruse so that Nick can mess with the judges? After all, he done the exact same thing before on another show.

In 2014, Nick dressed up like a mime and trolled the “America’s Got Talent” judges (Howard Stern, Howie Mandel, Heidi Klum and Mel B) into thinking he was auditioning. “This is gonna go well,” Howard sighed when Nick, i.e. Larry the Mime, first stepped foot on the big stage. Watch the “AGT” flashback video below.

After failing to answer any of the judges’ questions, Nick proceeded to give one of the most bland and obvious mime acts ever, filled with prat falls and robotic dancing. Unsurprisingly, he received four red X’s and was eliminated from the competition. When Howard suggested that Larry should “give up” his hobby, the formerly silent performer fought back. “Where do you guys get off telling me how to mime?” he asked as the panelists’ eyes went wide. “Do you know how hard it is to not talk? No you don’t, ’cause all you do is run your mouth, Howard. You’re a moron.”

The mime soon directed his anger toward the booing audience, X’ing them with his arms and shouting, “Boo yourself!” He then started rushing down toward the judges’ table, prompting Howie to call for security. But the panelists’ fear turned to excitement when they saw Larry up close. “That’s Nick!” Howie shouted as the white-faced clown removed his wig and suspenders.

But back to “The Masked Singer.” Nick is a professional dancer and singer, so he could have easily been the one performing “Ride Wit Me” by Nelly as the Chameleon on Wednesday night. Sure, the character is much taller than the host, but Nicole has a theory about that. “He’s got some platforms on,” she notices. “This is a season of surprises, so I know who it is. I think it’s Ken’s daddy, Nick Cannon. I think they’re shooby-dupin’ us!”

If Nick ends up being the secret celebrity hiding inside the Chameleon costume, it would be one of the most epic TV pranks of all time. After all, this one would have taken weeks of planning and the hiring of a guest host in order to pull off. Some of the other panelists’ guesses for the Chameleon included Dwight Howard, Redfoo, Calvin Harris and Tiesto. What do YOU think, “Masked Singer” fans?

Here is how Chameleon describes himself in his own words: “Ready for a wild ride? ‘Cause I’m a runnin’ chameleon. Unlike most of my fellow chams, I don’t just blend in, I put the tech in technicolor. It was all because of my pops who always taught me to keep up with the times. He encouraged me to tinker with every gizmo and gadget around, even with some wild creations. Years later, when my career almost tanked and I felt totally lost, I leaned back on what he taught me. I used those tech-savvy skills from my childhood to amplify my career and change the game. And now I’m here to change this game. Trust me, I won’t be blending in. Let’s jam.”