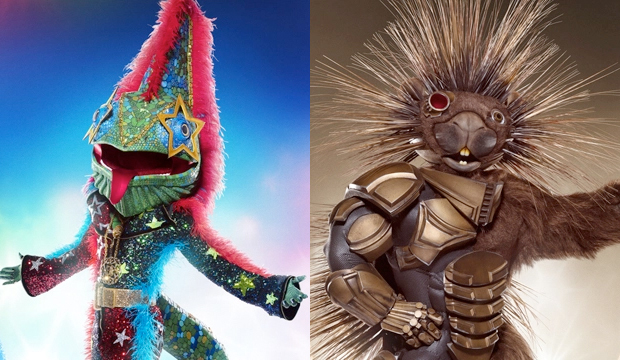 This week’s episode of “The Masked Singer” will be the end of the road for either Chameleon or Robopine, according to Gold Derby’s predictions. Our readers have been making their picks all season long and these two creatures are the likeliest to be eliminated during the Spicy 6 episode, airing Wednesday, May 5 on Fox. The other four crooners — Black Swan, Russian Dolls, Piglet and Yeti — should all live to sing another day. Do you agree or disagree with our racetrack odds? Be sure to make your own predictions and then defend your choice in the comments section.

The Chameleon has had Jenny McCarthy and Nicole Scherzinger “swooning” ever since the they first saw him sing and dance in the Season 5 premiere. Jenny proclaimed, “You have this beautiful tone in your voice. I would buy that album tomorrow with you singing on it.” As for why he did the show, Chameleon confessed he loves being in front of people, whether it’s “on stage or in your home.” The celebrity sleuths are convinced he’s a real-life hip hop artist, but which one?

The colorful gecko’s song book thus far has included the following tunes: “Ride Wit Me” by Nelly, “21 Questions” by 50 Cent, “It’s Bigger Than Hip Hop” by Dead Prez and “Regulate” by Warren G.

The panelists all praised Robopine’s voice and his slick moves when they first met him, even calling him a “triple threat,” i.e. someone who can sing, dance and act. However, they took major issue with the fact that he claimed to be 60 years old, saying he danced like a much younger man. “My kids and my grandkids told me I was supposed to hang it up a long time ago,” Robopine asserted at the time. “I’m 60 years old and I really appreciate the love, it means a lot.”

The robotic porcupine has performed the following songs on the big stage: “All Of Me” By John Legend, “Let’s Get It On” By Marvin Gaye, “Killing Me Softly” by Roberta Flack and “Never Too Much” by Luther Vandross.