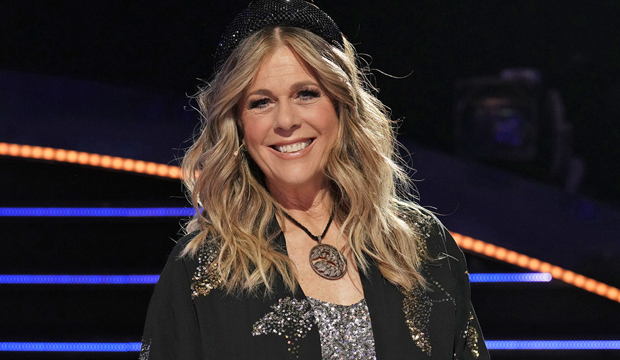 “The Masked Singer” got more than it bargained for when special guest judge Rita Wilson joined the panel for Wednesday’s Super 8 episode. Following the Chameleon’s hip hop performance of “Regulate” by Warren G feat. Nat Dogg, Rita shocked the audience when she declared, “You might have a competitor, Chameleon. You might not know this about me, but I can spit some flow.” The actress/singer/songwriter/producer then broke out into a rap version of Naughty by Nature‘s “Hip Hop Hooray.”

“Yo! That’s classic television right there,” shouted “TMS” host Nick Cannon from the stage, as the green lizard danced along to the actress’s mini performance. “Rita Wilson just got Naughty by Nature in front of Chameleon. Now I see where you sons get it from,” Nick added, referring to her and Tom Hanks‘ son, musician Chet Hanks. “Mom’s got all the swag!”

Rita later explained, “It took me like a month and a half to learn that song, but this guy sounds like a professional.” As it turns out, she originally learned the lyrics for her role in the film “Boy Genius” (2019), claiming at the time it was like “training for a marathon.” When Covid hit last year and she was locked down, Rita ended up recording a special version of the song with Naughty by Nature for charity (watch below).

Chameleon is one of the eight contestants still in the running to win the Golden Mask for “The Masked Singer” Season 5, with the others being Piglet, Robopine, Yeti, Russian Dolls, Crab, Seashell and Black Swan. At the end of the April 21 episode, two celebs will be unmasked, leaving only the Top 6 in the competition.

As for who might be hiding under the Chameleon costume, the panelists threw out such names as Machine Gun Kelly, Kyrie Irving, G-Eazy, Waka Flocka Flame, Wiz Khalifa, Charlie Puth, Mahershala Ali and John David Washington. Who do YOU think it is?