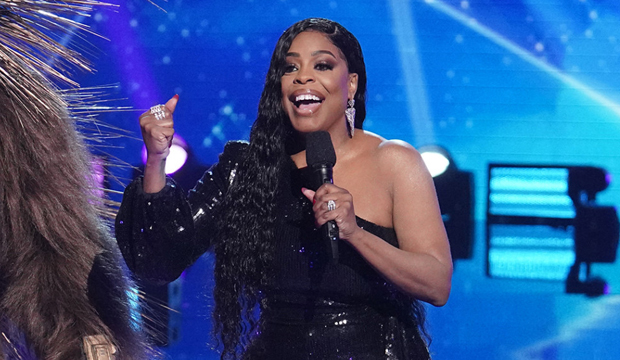 Group A returned to the stage during Wednesday night’s episode of “The Masked Singer,” only with a twist — they weren’t alone. After Raccoon, Robopine, Russian Dolls and Seashell performed their hearts out, guest host Niecy Nash brought in the first wild card contestant of the competition. This new mystery celeb also gave it their all on the stage, and then the virtual audience and panelists Robin Thicke, Jenny McCarthy, Ken Jeong and Nicole Scherzinger voted to eliminate one person. Which four costumed characters sailed through to the Group A finals and who was forced to unmask in front of America?

Below, read our minute-by-minute “The Masked Singer” recap of Season 5, Episode 3, titled “Group A Wildcard Round – Enter The Wildcards,” to find out what happened Wednesday, March 24 at 8:00 p.m. ET/PT. Then be sure to sound off in the comments section about your favorite costumed characters on Fox’s reality TV show and who you think has what it takes to win the entire competition.

8:00 p.m. — “Previously on ‘The Masked Singer’!” In last week’s second episode, the Group B contestants took the stage for the first time: Black Swan, Chameleon, Grandpa Monster, Phoenix and Piglet. After they all strutted their stuff, the votes came in and Phoenix was eliminated. Niecy unmasked the fiery bird, revealing Olympic gold medalist and reality TV star Caitlyn Jenner. “[My kids] have always known dad’s a little crazy,” she said in her exit interview. But enough about last week — let’s find out who the first wild card is!

8:10 p.m. — As tonight’s episode begins we see hints about a new predator entering the competition. All signs point to a shark, so the competition better watch out! Niecy is back again this week to welcome the Group A singers and also introduces tonight’s guest judge, Joel McHale. First up tonight are the Russian Dolls. Just how many people are in this costume? Let’s look at the clues. Russian Dolls say that kicking off Season 5 was a total rush (there’s a crib in the background). They totally confused the panel with their harmonies, but they haven’t always been in unison. We see solar system and a banjo, and one of the dolls says he was once rushed to the hospital, and if it wasn’t for the glue that binds them, things might not have gone so well. We see blocks that say “HELP” and Nicole mentions the dolls look a little different. There are two small ones as they begin to sing “Wonder” by Shawn Mendes. Then a third walks out to further confuse the panel, but they sound fantastic. They have great harmonies. Nicole says there are “some real, major vocals going on right here.” This week each act has a self-portrait clue. So how do the Russian Dolls see themselves? With colors that really “pop” like they do. The panel throws out guesses including Sugarland, Boyz II Men and some Jackson 5 members. Cluedle-Doo then says there could be a fourth member in hiding.

8:20 p.m. — Up next is the Raccoon. His last performance was a thrill like no other. The most thrilling part was seeing Jenny up close. He still can’t believe he’s on big stages. He started out as a fighter (we see coffee grounds) and his uncle taught him how to box. One day he became a champion and decades later he retired his gloves. We see a train when Raccoon mentions he was asked to train a Hollywood leading man. Eventually he wasn’t just training the leading man, he was the leading man. He had no business being a big Hollywood star, but no one is stopping him! Tonight Raccoon is singing “Ring of Fire” by Johnny Cash. Now, if you’re wondering if Raccoon has suddenly learned to sing since his last performance, the answer is no. He’s still absolutely awful. I think he’s the worst singer that’s ever been on the show, but the panel is having fun with it. Raccoon clearly has a crush on Jenny and she appears on a “Wanted” poster during his performance. His self-portrait is surrounded by bats. The panel guesses Raccoon could be Tony Danza, Sylvester Stallone or Jon Voight.

8:30 p.m. — Next up is the crowd-pleasing Robopine. His first performance made every quill on his back stand up. He’s been in a funk lately, but putting on this armor and singing his heart out was exactly what he needed. He felt like a singing superhero. About 60 years ago his superheroes kept the streets clean in Costa Rica. We see a “Men at Work” sign and some construction workers who he often enjoys lending a hand to. We also see a cat and moues. Tonight Robopine is singing “All of Me” by John Legend. To me the Robopine sounds just like Tyrese, but his clues say he’s much older than the R&B singer. Who is this? He’s got a fantastic voice and Nicole is crying. Nicole says she has never been more compelled by any other performance on any other season. The Robopine sees himself as a rock star and confirms he once had a fear of spiders. The panel thinks Robopine could be Brian McKnight, Jason DeRulo, Wesley Snipes or Eddie Murphy.

8:40 p.m. — Last up from tonight’s main lineup is the Seashell. It’s been ages since she’s been on a stage so stepping out in front of audiences for the first time, she was a bundle of nerves. We see a doodle pup of some kind watching her on TV and she says in the past she felt like a tiny shell in a big world. Then one day a jock asked her out (we see baseballs) and made her feel larger than life. We see 2 minutes on a stopwatch, a cat, a bagel and some cactuses. Tonight Seashell is singing “Confident” by Demi Lovato. Okay, I like this sassy side of the Seashell and she’s showing off a serious belting range this week. Sing Seashell! In her portrait we see a tornado filled with a microphone, a dumbbell and some food. Apparently Seashell wears many hats. The panel thinks she could be Ashley Simpson, Jenny Slate or Haylie Duff.

8:50 p.m. — It’s time to shake up the competition with the season’s first wildcard! Release the Orca! Orca says pizza shaped his life. He was 24 and closer to becoming a punchline than a big star. His dad told him if he didn’t make waves by age 25 it was time to move on. He hid his audition tapes inside boxes of pizza and delivered them all over town. And in the 11th hour, boom! It happened. Throughout the package we see images of a clock set to 2:59, a hawk and some…fruit snacks? There was a lot going on. Tonight Orca is singing “We’re Not Gonna Take It” by Twisted Sister. He comes down from the rafters on a swing and although he doesn’t necessarily sound like a professional singer, he can definitely carry a tune. It was Joel’s favorite performance of the night and Robin says you can’t fake the grit in that vote. In Orca’s self-portrait, he says he’s always the biggest fish in the sea and we see a plane. The panel thinks Orca could be Dave Grohl, Billy Corgan or Kevin Bacon.