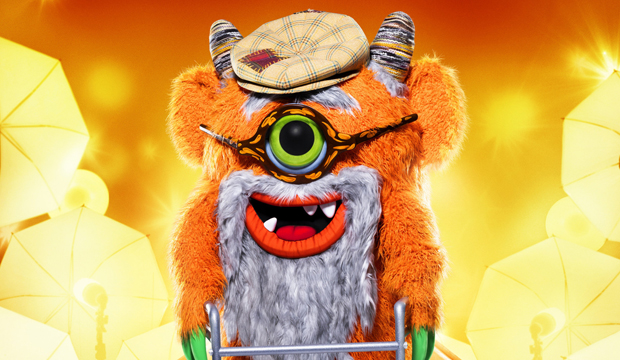 Another week, another wild card. This time around, Crab joined the cast of “The Masked Singer” as the second wild card of Season 5. This mystery celebrity performed after the other Group B contestants — Black Swan, Chameleon, Grandpa Monster and Piglet — but all were eligible to be unmasked in front of America. So which four costumed characters sailed through to the Group B finals and who was sadly eliminated? Guest host Niecy Nash once again presided over the show and asked questions of panelists Robin Thicke, Jenny McCarthy, Ken Jeong and Nicole Scherzinger.

Below, read our minute-by-minute “The Masked Singer” recap of Season 5, Episode 4, titled “Group B Wildcard Round – Rule Of Claw,” to find out what happened Wednesday, March 31 at 8:00 p.m. ET/PT. Then be sure to sound off in the comments section about your favorite costumed characters on Fox’s reality TV show and who you think has what it takes to win the entire competition.

8:00 p.m. — “Previously on ‘The Masked Singer’!” In last week’s third episode, the Group A contestants took the stage again: Raccoon, Robopine, Russian Dolls and Seashell. After they all strutted their stuff, a wild card — Orca — officially entered the competition. The votes came in and Raccoon was eliminated, revealing famed actor Danny Trejo. “I feel like a winner, I don’t care,” he said in his exit interview. But enough about last week — let’s find out who the second wild card is!

8:10 p.m. — Grandpa Monster is kicking things off tonight. He has a newfound confidence in this new role and during his clue package we see a Santa hat and picture of someone doing the splits. He was once left alone in the wild without food, water or shelter and we see Grandpa Monster camping with a dog (boxer breed). We also see a plane fly over as he mentions that he’s traveled the world and sold out arenas (the Piglet is seen on a bullseye in the woods). Tonight Grandpa Monster is singing “Bad Reputation” by Joan Jett. He begins by tearing up a photo of the Piglet (he really has it out for him!). Grandpa Monster actually sounds pretty good tonight and this is a fun performance. The guy can move and may not be as old as I thought he was a couple weeks ago. Tonight’s extra clue shows us each contestant’s first childhood crush. Grandpa Monster’s first crush is Dwayne Johnson AKA the Rock. The panel thinks Grandpa Monster could be Kevin Hart, Jack Black or Jake Paul.

8:20 p.m. — The Piglet is next and he’s hungry! Making his debut on this stage with four days notice was a wild ride. Love songs make him feel right at home and we see him in a locker-room with a football. He’s always had chops, but it was his competitive nature that made him a hometown hero. A sign says “Don’t be a ball hog” with 3,528 rushing yards mentioned. There’s also a knight in shining armor and a football helmet with a mustang (horse) on it. The Piglet says a few quotes from “Friday Night Lights” before beginning his performance of “Good to Be Alive (Hallelujah)” by Andy Grammer. He can definitely sing and has some nice dance moves. I think this is so obviously Nick Lachey that it’s hard to even speculate on anyone else. Am I wrong? Next we learn his childhood crush was Meg Ryan. The panel thinks the Piglet could be JC Chasez, Austin Mahone, Jordan Knight or Jonathan Knight.

8:30 p.m. — Third up is the Black Swan. She might have seemed confident last week, but she was terrified. It made her want to put into words how thankful she is to the person that gave her life and the confidence it took to take this journey. It hasn’t always been an easy road for them. The higher she flew, the harder it became for them to keep up. She saw their heart breaking so she had to let them go. It was the hardest decision in her life, but the Black Swan was only able to soar because of the wings they gave her. Eventually they were able to fly back into each other’s lives. We see hints about courtrooms, a canoe and a penny + a nickel (six cents?) Tonight the Black Swan is singing “In My Blood” by Shawn Mendes. She is lowered from the ceiling in a trapeze-like swing and this girl can SANG! Whoever it is definitely has experience singing on stage and when she hits the chorus her voice soars like a high-flying swan. We learn her first crush was D’Angelo. The panel thinks the Black Swan could be Demi Lovato, Lindsay Lohan or Ashley Simpson.

8:40 p.m. — The Chameleon is the last to hit the stage before tonight’s new wildcard performer. The Chameleon knew if he was going to hold his own against these powerhouse singers, he had to stand out and let his flow shine. His whole life has been about embracing what makes him unique. We see a graduation cap, cheese and a taxi with peaches on it. When he was young someone inseparable from him was constantly attacked. He helped lift her up until she ultimately learned to embrace what made her unique. But then tragedy struck and she was taken from him. It was the most difficult thing he ever faced (we see a hint at LGBTQ+ equality). Tonight the Chameleon is singing “21 Questions” by 50 Cent featuring Nate Dogg. I have to say, his voice sounds more distinct on this performance and he does NOT sound like Nick Cannon. I know those conspiracy theories have been swirling. He has a deep, raspy voice and he’s got great swag. Niecy thinks she may have dated him at one point, but who was the Chameleon’s first crush? Selma Hayek! The panel thinks the Chameleon could be Iman Shumpert, Dwyane Wade or 2 Chainz.

8:50 p.m. — It’s time for the latest wildcard to shake up the game. The Crab has entered the building! He’s a festive spirit that seems to be having a good time already. The Crab has dreamed of being a star his whole life. He was blessed that his dream came true in a flash. Everyone around the globe wanted to be like him. He felt like a king crab. But with every blessing, tragedy follows. It’s been a struggle dealing with the darkness that has followed him and his family. They’ve been through a lot of trauma (we see 2+3 on a calculator). His song tonight is a tribute to love and the family members that have gone before him. The Crab is singing “Ain’t No Sunshine” by Bill Withers. Spoiler alert! I can tell within five seconds that this is Bobby Brown! I know that tone anywhere. And his family has definitely been filled with tragedy (he’s lost two children and his ex-wife Whitney Houston). That’s my take anyways. The Crab gave a beautiful performance and Nicole is all choked up. Who was the Crab’s first crush? Janet Jackson. That’s another big clue that points straight to Bobby Brown. The panel thinks the Crab could be Bobby Brown, Lenny Kravitz or Johnny Gill.

8:59 p.m. — The votes have been counted and it’s time for a celebrity to be unmasked! The singer heading home tonight is Grandpa Monster. He falls to the stage crying. Haha, aww, poor guy. But before we learn Grandpa Monster identity, let’s find out who the panel thought (and thinks) he is. Robin’s first guess was Johnny Manziel and he’s sticking to it. Jenny’s first guess was Morgan Freeman and she’s switching to The Miz. Ken’s first impression was Emmitt Smith and he changed his mind to Kevin Hart. Last, Nicole initially guessed Cam Newton but changed her mind to Jake Paul. It’s time for Grandpa Monster to take it off and we learn Nicole was close, but not correct. It’s internet personality, podcaster and boxer Logan Paul! Oh, Nicole, so close! That’s a wrap for tonight.