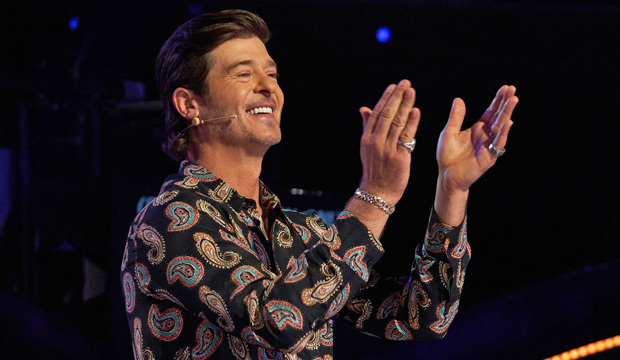 The third wild card of Season 5, Bulldog, joined the cast of “The Masked Singer” during Wednesday’s fifth episode. This mystery celebrity with a barkingly good voice performed after the other Group B contestants — Black Swan, Chameleon, Piglet and Crab — but all were eligible to be unmasked in front of America. So which four costumed characters sailed through to the next round and who was sadly eliminated? Guest host Niecy Nash once again presided over the wild TV circus, with the panelists being Robin Thicke, Jenny McCarthy, Ken Jeong and Nicole Scherzinger.

Below, read our minute-by-minute “The Masked Singer” recap of Season 5, Episode 5, titled “Group B Finals– The Ulti “Mutt” Wildcard,” to find out what happened Wednesday, April 7 at 8:00 p.m. ET/PT. Then be sure to sound off in the comments section about your favorite costumed characters on Fox’s reality TV show and who you think has what it takes to win the entire competition.

8:00 p.m. — “Previously on ‘The Masked Singer’!” In last week’s fourth episode, the Group B contestants took the stage again: Grandpa Monster, Black Swan, Chameleon and Piglet. After they all strutted their stuff, the second wild card — Crab — officially entered the competition. The votes came in and Grandpa Monster was eliminated, revealing internet celeb Logan Paul. “I never stood a chance,” he said in his exit interview. But enough about last week — let’s find out who the third wild card is!

8:10 p.m. — The Group B finals begin with a performance from the Black Swan. With every performance she’s starting to shake off her nerves. Her confidence that’s been trapped inside is emerging. The feathered beauty looks into a mirror as she says her anonymity brings her back to her beginnings, when she first started her career and worried about how her appearance would be perceived. So she sent out her audition tapes with no face (we see three 10’s), but when people finally saw her she was right. She wasn’t what they were expecting. We see a bag with the state of Montana on it, a black cat and she says she recently reached a major milestone. Tonight the Black Swan is singing “How Will I Know” by Whitney Houston. Singers rarely sound good when they cover “The Voice” but this is about the best Whitney cover I’ve heard. The Black Swan has an incredible range and a seriously powerful head voice! For an extra clue, we get to see one meaningful item from the Black Swan’s home: a unicorn that commemorates a singer and friend of the Black Swan’s that recently passed away. The panel thinks the Black Swan could be Emily Osment, Victoria Justice or Brenda Song.

8:20 p.m. — Next to the stage is the pitch perfect Piglet. This experience has been a jolt of adrenaline for him after a static year. Years ago he was really getting grilled (we see a genie lamp and a lei from Hawaii while he’s behind bars). Then someone unexpected appeared (in the form of a spider in this clue package) and turned his life around. She rescued him from the heat and gave him a brand new start. We see the Piglet sharing corn with his spider friend, a blue ribbon with “1 DR” on it and palm trees. Tonight the Piglet is singing “7 Years” by Lukas Graham. Vocally, he sounds just like Nick Lachey to me. What can I say? I’m a 90’s kid. I can’t imagine this being anyone else, but this porker sure can sing. He’s comfortable on stage and is clearly a seasoned performer. Jenny is weeping by the end of this performance.  The Piglet’s extra clue is a pair of dog tags with a “P” on them. The panel thinks the Piglet could be Kevin Richardson, Bradley Cooper, Zayn Malik or AJ McLean.

8:35 p.m. — Third up in this Group B final is the Crab. Being on stage for the first time was tough for him, both physically and emotionally. There’s a purity to being on stage that reminds him of being a kid, when he got into all sorts of trouble. His mother tried to keep him on the straight and narrow path and we see him in the kitchen cooking with her. We see some mac and cheese, BBQ ribs and various other kitchen items as he says cooking has become a passion of his. The Crab is singing “Give it to Me Baby” by Rick James. After last week’s ballad the crustacean is getting FUNKY. He’s not moving around a whole lot and doesn’t sound real great either. As the panel begins to talk, the Crab says he needs to take a break. He has overheated and is rushed backstage for some medical attention as the show cuts to commercial. While we wait, I’ll just repeat what I said last week: Crab is Bobby Brown. Okay, now that I’ve gotten that off my chest, the Crab has returned to the stage. His extra clue from home is a bowler hat like his idol, Sammy Davis Jr., often wore. The panel thinks the Crab could be Martin Lawrence, Bobby Brown or someone from Boyz II Men.

8:40 p.m. — The colorful Chameleon is next to perform. It felt good impressing the panel with his smooth flow last week, but one person he wants to impress more than anyone is his little chameleon. The raging reptile loved the Teenage Mutant Ninja Turtles as a kid and we see things in his clue package like street signs, clocks set to 3:46 and martial arts. The Chameleon feels like a superhero and tonight he’s performing “Hip Hop” by Dead Prez. He has a great flow and definitely sounds like a professional rapper to my untrained hip-hop ears. As an extra clue from the Chameleon’s home, we see some hot wings. The panel thinks this reptile could be Waka Flocka Flame, Wiz Khalifa or Machine Gun Kelly.

8:50 p.m. — It’s finally time to get a look at the third wildcard of Season 5, the Bulldog! He’s tall, covered in gold and looks confident. His whole life he’s had to fend for himself, stepping up to any challenge that comes his way. He’s made moves on every green field with panthers and pitbulls. We see a bowl with “Super” on it and mention of the “sexiest dog alive.” But he promises he’s a big softy inside. In the package I noticed the number 80 at the beginning and GT80 on a car license plate. Tonight the Bulldog is dedicating his performance to Niecy as he sings “Candy Girl” by New Edition. Is this Nick Cannon? He’s definitely not a great singer, but this is kind of a fun, ridiculous performance. I’m enjoying it. His bonus clue from home says “And…live from New York it’s Saturday Night!” The panel thinks the Bulldog could be Chris Tucker, Andy Samberg or Chris Rock.

8:59 p.m. — Five singers stand on the stage, but only four will advance to the the Super 8! But there’s a twist. Niecy announces the vote will not count and she alone will decide which performer will be unmasked. And she has eliminated the Bulldog! He unmasks immediately and reveals himself to be Nick Cannon! Surprise! I was right! Nick is back and it looks like he’ll take back the reigns as host for the remainder of this season. Welcome back Nick!