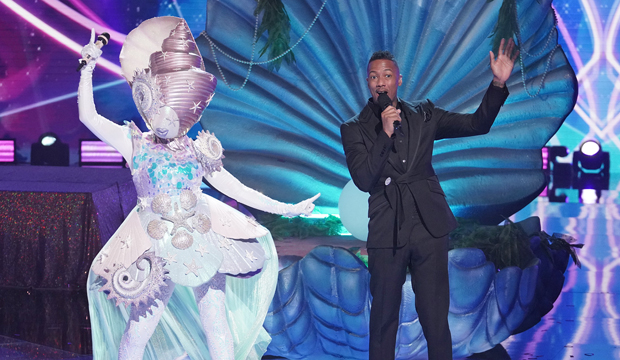 The fourth (and final) wild card of Season 5, Yeti, joined the cast of “The Masked Singer” at the end of Wednesday’s sixth episode. This mystery celebrity earned unanimous praise from panelists Robin Thicke, Jenny McCarthy, Ken Jeong and Nicole Scherzinger, suggesting he could be the new front-runner. The other Group A contestants — Orca, Robopine, Russian Dolls and Seashell — performed their hearts out in order to stay in the competition, but how did everything play out when the votes were cast? Oh yeah, and Nick Cannon officially returned to hosting duty — welcome back, Nick!

Below, read our minute-by-minute “The Masked Singer” recap of Season 5, Episode 6, titled “Group A Finals – In The Nick Of Time,” to find out what happened Wednesday, April 14 at 8:00 p.m. ET/PT. Then be sure to sound off in the comments section about your favorite costumed characters on Fox’s reality TV show and who you think has what it takes to win the entire competition.

8:00 p.m. — “Previously on ‘The Masked Singer’!” In last week’s fifth episode, Group B contestants Crab, Black Swan, Chameleon and Piglet took the stage for the last time as a group. After they all strutted their stuff, the third wild card — Bulldog — officially entered the competition. Guest host Niecy Nash ignored the votes and personally eliminated Bulldog, revealing none other than Nick Cannon. “I dedicated my performance to you because you truly are a queen,” the host said in his exit interview. But enough about last week — let’s find out who the final wild card is!

8:10 p.m. — The panel is thrilled to see Nick walk out on stage, ready to host his first episode of Season 5. They dedicate a poorly sung version of “That’s What Friends are For” to the host before the first competitor of the Group A finals is announced. The Russian Dolls kick things off with some new clues: When this duo became a trio last time, it was a gamechanger. Performing on this epic stage is a far cry from where they started. Life on the road was not glamourous. They performed at parking lots and softball fields. We see the Snow Owls in their clue package and also learn they have performed for a former president. Tonight they sing “Want to Want Me” by Jason Derulo and, as always, they sound great. I’m completely confused about who this is, but they have great harmonies and at least one of them has an impressive falsetto. Nicole says they’re raising the bar and she’s still unsure if it’s two guys and a girl or three guys. Nick shoots one more clue about the Russian Dolls out of his golden cannon, which reads: “What Goes Around…Comes Around.” They say they’ve been together for some time, but it was time for them to come back together again, to the stage. The panel thinks they could be Pentatonix, the Jonas Brothers or 98 Degrees.

8:25 p.m. — Next up is the Robopine, who is ready to release some magic onto the stage. He wasn’t sure what to expect from this adventure, but now he’s on a mission to get to the end. His entire career he’s been on a quest for a certain golden relic. We see a “6” in his package as he says it’s been an action-packed and fast-paced ride. He always escapes because he’s “Jonesin'” for that idol. Tonight he’s singing “Killing Me Softly” by Roberta Flack. For some reason his voice is more clear to me this week and I have zero doubt this is Tyrese. His voice is just too recognizable and that velvety tone suits this song perfectly. He even throws in a cute little dance that impresses Nicole. I wish he would just let his vocals rip though, I feel like Robopine always holds back. His bonus clue says “AKA.” When Ken suggests Robopine could be Tom Cruise, the masked critter is so offended that he walks towards the panelist as if to attack him. Of course they cut to commercial break during this dramatic event. Everything is fine when they return and further guesses like Terrence Howard and Jamie Foxx.

8:30 p.m. — The Seashell is up next with a few new clues: She’s been so fortunate her entire career to walk in a variety of shoes. But one of the things she’s most proud of is being called a trailblazer and role model. It appears she is married and Seashell says when she was younger, shows about girls like her weren’t on TV much. Now many people follow her path and that keeps her going strong (we see supplements/vitamins). Tonight Seashell is singing “Tell Me Something Good” by Rufus & Chaka Khan. This is a sexier side to Seashell and it’s nice to see her having a bit of fun on the stage this week. Her voice is smooth and has elements of power, but I’m not sure if she’s known for singing. I have a feeling this is an actress who sings, based on the clues. Her final clue says “Motown,” which Seashell says brought her family together. The panel thinks this could be Ashanti, Tamia, Keke Palmer or Alicia Silverstone. Nick has a pretty good idea he knows her true identity and seems to think the Seashell is a good friend of his.

8:40 p.m. — The Orca says last time he had to pull out all the stops as the first wild card and it was a lot of pressure. He channeled his hero, his father, and the nerves washed away. He says his father held on just long enough to see Orca’s own son baptized. We see “$3” as Orca says his dad’s last words were about how proud he was to see Orca become a father. Tonight he sings “Every Rose Has Its Thorn” by Poison. This is throwing me off because Orca sounds a lot different than he did in prior weeks. He sounds younger and has a naturally raspy, rock voice. I’m starting to think he’s a professional singer, which I didn’t before. Orca is emotional when he says he’s the father of 10-year old twins and says, “That was for my pops.” An extra clue from the gold cannon says “Purrrr.” Orca says he has a heart, but he also likes to “purrrrty.” The panel thinks this could be Fred Durst, Billie Jo Armstrong or Jeremy Renner.

8:50 p.m. — The final wild card of the season is here and it’s an energetic Yeti that looks ready to rock! Here are some clues: As a Yeti, he only comes out of hiding for a mammoth reason. He wants to be a wild force to be reckoned with. Where he comes from, too many yetis become monsters. But he had a secret weapon — a village of warrior women who were always there to show him the way. We see cupcakes, jam and berries in a sandwich as he thanks the women who raised him. Tonight he’s singing “If It Isn’t Love” by New Edition. Woah! This is much better than I was expecting and Yeti can actually sing and he’s got some serious moves. Jenny is convinced she knows who this is as the Yeti continues showing off some of the best dance moves we’ve seen on “The Masked Singer” stage. The panel is thinks they have a new front-runner on their hands. To me Yeti almost sounds like Chris Brown. The latest clue says “Aphrodite” and Yeti says he’s all about love, love, love. The panel thinks this could be Ray J, Justin Bieber or Taran Killam.

8:59 p.m. — The votes are in and the singer with the least amount of votes and being unmasked tonight is the Orca. Before he takes it off, we will see what the panelists first impressions were and learn if they would like to make a change. Jenny said it was Dave Grohl and has changed her guess to Kelly Slater. Nicole also guessed Dave Grohl and she’s sticking with it. Robin’s first impression was Billie Jo Armstrong and he’s keeping it. Ken guessed Jon Bon Jovi but has now switched to Billie Jo Armstrong as well. But when the Orca pulls off his mask we learn it is actually singer-songwriter and Sugar Ray frontman, Mark McGrath! That’s a wrap for tonight. Next week Groups A and B will finally merge for a 2-hour episode featuring the Super 8.