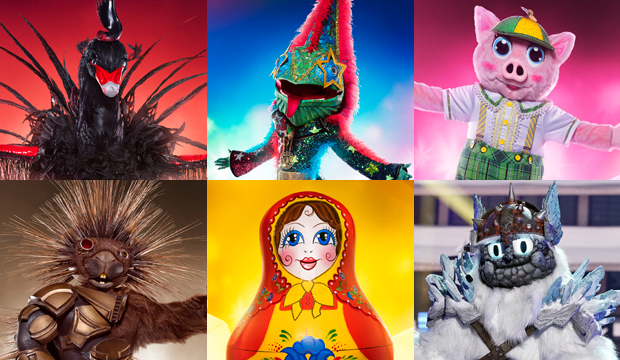 Wednesday’s Spicy 6 episode of “The Masked Singer” teased that all of the remaining contestants would “take it off,” but it turned out to be just for brief moments during their clues videos. And they still had secrecy visors on — womp, womp. Following the previous double unmasking, only a half-dozen costumes were still in the hunt for the Golden Mask: Robopine, Russian Dolls, Yeti, Black Swan, Chameleon and Piglet. They performed once again for panelists Robin Thicke, Jenny McCarthy, Ken Jeong and Nicole Scherzinger, plus guest judge Chrissy Metz. So who was eliminated, failing to make it into the Top 5?

Below, read our minute-by-minute “The Masked Singer” recap of Season 5, Episode 8, titled “The Spicy Six – The Competition Heats Up,” to find out what happened Wednesday, May 5 at 8:00 p.m. ET/PT. Then be sure to sound off in the comments section about your favorite costumed characters on Fox’s reality TV show and who you think has what it takes to win the entire competition.

8:00 p.m. — “Previously on ‘The Masked Singer’!” In the recent Super 8 episode, the remaining singers from Group A and Group B took the stage together for the first time in a special two-hour event hosted by Nick Cannon. By the end of the episode, two celebs had been unmasked: Bobby Brown as Crab and Tamera Mowry-Housely as Seashell. Both Ken and Jenny correctly named Bobby, adding points to their Golden Ear scores, though everyone got Tamera wrong. But enough about last week — it’s time for the Spicy 6!

8:09 p.m. — Grab your margarita and get ready for a Cinco de Mayo fiesta on tonight’s Spicy 6 edition of “The Masked Singer.” Chrissy Metz joins the panel before Nick announces Yeti as the night’s first performer. We see a panda in the background as he says it is weird to pull off his mask and come out of hiding. Last week he connected with the music and enjoyed showing off his secret skill of skating. He says he’s a family Yeti and when his daughter was born he dropped everything to rush home and be the first to hold her. It was important to him because his nana was the first to hold him and they have an unbreakable bond. The camera zooms in on a pacifier and ice cream cones before Yeti reveals his children are always pushing him to be bold, so tonight he has a whole new set of moves that he hopes they love. He’s singing “It Takes Two” by Rob Base & DJ EZ Rock and is showing off some serious rap skills we haven’t seen from him before. This is definitely getting the party started and Yeti never fails to impress. I’m shocked by the dance moves he’s able to pull off in his huge costume. He even ended in the splits! That was great. Next we get a final clue that shows an ear of corn, which he says “popped” into his mind. The panel thinks Yeti could be Vin Diesel, Jason Derulo, Trey Songz or Miguel.

8:15 p.m. — Robopine is next and he’s surrounded by what looks like various props from a carnival or birthday party. I see balloons, darts and a popcorn machine. He reveals that most people don’t know his family was on food stamps and it was a constant struggle. He will never forget his school field trip when he went to a theme park. Looking back, he could never imagine kids would feel that same rush on a theme park ride he had been a part of. The camera focuses in on butter, eggs, toast, jam and books. Someone he loves dearly who was a huge part of his success was taken too soon, in the most tragic way. He was happy to be on life’s rollercoaster with him while he could. Tonight Robopine is singing “Water Runs Dry” by Boyz II Men. He has my favorite voice in the competition. Velvet! The Robopine knows how to serenade a crowd, but this felt very short and was pretty understated. I’m not sure it had the excitement he needs to advance, but we will see. His final hint is light bulb and Robopine says he’s not hurting for ideas. The panel thinks this could be Usher, Forest Whitaker, Tyrese or Tank. I agree with Nicole’s choice of Tyrese and the friend he lost too soon is obviously Paul Walker.

8:23 p.m. — Next up is the Piglet, who appears to be in a barber shop of some sort during his interview. The camera zooms in on fake vampire teeth, a brush and scissors. For an embarrassing story, he talks about the time he shaved his head in unity with his fraternity brothers before the party of year. That’s when he found out he had a huge birth mark on the side of his head shaped like an apple. Then, he ran into the sorority girl of his dreams and she said he really needs hair. We see four gold bars and a series of numbers on a barber’s chair, but the 4 is on the floor. Tonight Piglet is singing “Against All Odds (Take a Look at Me Now” by Phil Collins. The Piglet is a great singer, with smooth vocals and he’s nailing this classic. I’d even give him the edge over Robopine for picking a song with a better climax. For an extra clue, we see Cluedle-Doo! Sabatoge! He won’t let us see what the Piglet is thinking, but says he’s been following this guy’s career since he caught touchdowns from Dan Marino. The panel believes this porky singer could be Taylor Lautner, Robert Pattinson, Brian Littrell or Nick Lachey.

8:33 p.m. — The second trio of performances will begin with the Black Swan. She’s in a cabaret when she reveals she’s finally having fun. Last week she felt like she was going to faint inside of the costume and she was crying inside the mask and spiraling. The camera zooms in on an umbrella over two plastic cups. As a little girl she would put a hat out on the street and sing for people. She had no fear and she’s really trying to channel that fearlessness now that she’s grown up. We also see New Hampshire and a can of soda in the clue package before she begins singing “Do I Do” by Stevie Wonder. This diva can’t hit a bad note and she’s so powerful. I like that she’s switching things up this week with a fun, uptempo performance. Like always, she nails it! A final clue reveals Mariah Carey, an artist whose record Black Swan surpassed at one time. It was a thrill since the Black Swan is a huge fan of hers. The panel thinks Black Swan could be Kesha, Christina Milian or Mandy Moore.

8:42 p.m. — The Russian Dolls are up next and they reveal that even though just two of them are in this interview, they speak for all of the dolls when they say when they first started they never thought that putting themselves out there like that would open them up to pretty harsh criticism (we see a nickel and a dime). Their looks were critiqued and they were laughed at. We see a belt buckle as they say haters will hate and they’ve embraced not being the coolest because they’ve reached a lot of people who felt like outsiders just like them. We also see the camera zoom in on a wok/wop. Tonight the Russian Dolls are singing “Shallow” by Lady Gaga and Bradley Cooper. There’s only two of them on stage tonight and they sound fantastic! There is so much texture and range in their voices and this song is a winner every time. A final clue reveals a kangaroo. And just like a kangaroo with its joeys, you never know how many dolls will “pop out.” The panelists think they could be Hanson, Nickelback or Avril Lavigne & Chad Kroeger.

8:52 p.m. — The colorful Chameleon will close out the show tonight. But first, he reveals his secret to success is to do something that speaks to him. He found his groove by making songs his own. And as a military kid he always had to adapt from city to city. He became good at making friends and now he has a solid base that always has his back. Tonight, he’s busting out a song from one of those friends — another lizard, the Dragon. Clues shown in the package included brownies for sale, an airplane, a captain’s hat, sliced lemons and a pitcher of lemonade or iced tea. Chameleon is singing “Put Your Hands Where My Eyes Could See” by Busta Rhymes. There’s some cool glow-in-the-dark effects going on with Chameleon’s costume and this song is a tongue twister! This is definitely a professional rapper because no average performer can flow like this. It was a cool stage production, but this wasn’t my favorite performance of his. I think Chameleon and Robopine may be in danger tonight. For Chameleon’s final clue we see a sneaker. He says it should take us a step in the right direction, or maybe the left. The panelists think this could be Young Thug or Snoop Dogg.

8:59 p.m. — The votes are in and it’s time for one of these colorful performers to be unmasked. The singer with the least amount of votes is Robopine. Before he is revealed, the panelists will have to reveal their first impression guesses and then decide if they want to keep them. Nicole, Jenny and Ken all picked Jamie Foxx. Jenny is sticking with that for her final guess, but her co-panelists changed their minds. Nicole switches over to Tyrese. Ken thinks he is Wesley Snipes. Robin’s first impression was Ginuwine but he now says Terrence Howard. Chrissy agrees with Nicole that this is Tyrese. At last, the Robopine pulls off his mask and he is, indeed, Grammy nominated singer-songwriter, actor and model Tyrese! That’s a wrap for tonight’s Super 6.