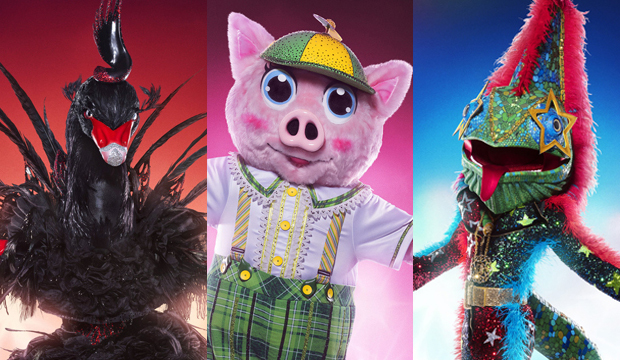 It’s been a “game-changing” season full of wild cards, wacky clues and one host being unmasked, but “The Masked Singer” has finally crowned a winner. Season 5 ended on May 26 with either Black Swan, Piglet or Chameleon winning the coveted Golden Mask. (See Gold Derby’s finale racetrack odds.) In addition, one of the main panelists — Jenny McCarthy, Robin Thicke, Nicole Scherzinger or Ken Jeong — took home the second inaugural Golden Ear trophy. How did the season finale play out on Wednesday night? Did YOU guess the secret identities of the final three costumed contenders?

Below, read our minute-by-minute “The Masked Singer” recap of the Season 5 finale to find out what happened Wednesday, May 26 at 8:00 p.m. ET/PT. Then be sure to sound off in the comments section about your favorite costumed characters on Fox’s reality TV show and who you think has what it takes to win the entire competition. Nick Cannon hosts the Emmy-winning program.

8:00 p.m. — “Previously on ‘The Masked Singer’!” In last week’s semifinals episode, the remaining four singers took the stage with Omarion (Yeti) ultimately being voted out. “This was a new challenge to broaden my range as a performer,” he said during his exit interview. The season’s annoying clue-meister rooster, Cluedle-Doo, was also unmasked, revealing Donnie Wahlberg. But enough about last week. Will Black Swan, Piglet or Chameleon win tonight’s Golden Mask trophy? Let’s find out!

8:05 p.m. — What better way to kick things off than with a live performance from last year’s champ, LeAnn Rimes aka the Sun. She’s performing “How Do I Live” unmasked as the three finalists join her. This song doesn’t really suit the Chameleon, but he speak-sings throughout haha. LeAnn really changed up her vocal arrangement from the original recording and she sounds fantastic! She will take a seat at the panel for the remainder of the episode.

8:10 p.m. — Chameleon originally signed up to be on “The Masked Singer” for his kid, but it’s turned out to be one of the best experiences of his life. He enjoys educating the kids about hip hop and now he wants to be the first rapper to take home the Golden Mask trophy. Tonight he’s performing “Gangsta’s Paradise” by Coolio. This lizard’s song selection is so on point! Masked dancers parade around him as he pumps up viewers at home and Nick calls him “the definition of lit.” Nicole calls him a “megastar” before Chameleon says it would mean everything to him if he won, but he’s doing this for his son.

8:20 p.m. — Black Swan didn’t come into this competition thinking about winning, partly because of her stage fright. She wanted to get back to basics and just sing great songs. She says she was famous before she even got her driver’s license and believes she’s accomplished her mission to put herself out there this season. Tonight Black Swan is singing “How Am I Supposed To Live Without You” by Michael Bolton. The opening cords of almost any ballad makes Nicole weep and there she goes! Of course the feathered diva is killing the vocals and is certainly the most gifted singer this season. Robin says, “Forget stage fright, that stage should be afraid of you!” Black Swan says a win would mean she conquered some fears.

8:30 p.m. — Piglet was one of the first people to open up his life to the public. It was before social media and it came with a lot of criticism. The one thing he’s learned is that you have to challenge yourself and that is what this experience has meant to him. He has worked as hard as he possibly can and tonight he’s singing “Faithfully” by Journey. Great song choice. Who doesn’t love Journey? And he’s holding a balloon just to be adorable. Ken looks choked up as this piggy belts out the power ballad. Jenny says they saved the best for last tonight. Piglet says this show has reminded him how much he loves music and how much we all need music right now.

8:40 p.m. — Three finalists have delivered phenomenal performances and the final votes have been tabulated. The singer being unmasked in third place is the Chameleon. But before we see his famous face, Nick retrieves the panel’s first impression guesses from the vault. Jenny’s first impression guess was Denzel Washington. Wow! It’s no surprise she has changed her mind to Gucci Mane. Robin’s first guess was Redfoo, but now he says it’s Wiz Khalifa. Nicole’s first guess was Nick Cannon, so she’s forced to make a change and she think’s Chameleon is Wiz Khalifa. Ken originally thought it was basketball player Dwight Howard, but now he believes it is 2 Chainz. LeAnn obviously didn’t have a first impression guess, but she goes with Ken and picks 2 Chainz. Are any of them right? Chameleon takes off the mask to reveal Golden Globe and Grammy nominated rapper, Wiz Khalifa!

8:50 p.m. — The winner of this season’s Golden Mask is the Piglet! Congratulations to this porky singer! He raises his new trophy in triumph, but now it’s time to unmask this season’s runner-up, the Black Swan. But before that happens, Nick retrieves those first impression guesses. Robin’s first guess was Rita Ora, but he changes his tune to Normani. Jennys’ first guess way Leighton Meester and now says R&B singer Monica. Ken originally thought it was Jessie J, but now he thinks she is Demi Lovato. Finally, Nicole guessed Natasha Bedingfield, but is now certain the Black Swan is JoJo. LeAnn agrees with Nicole that this is JoJo. She rips off her mask and reveals herself as Grammy winner JoJo!

8:59 p.m. — It’s finally time to find out once and for all who this Golden Mask winning Piglet is. But first, the panelists have to sit through their humiliating first impression guesses. Nicole originally guessed Cody Simpson, but now she says he is Brian Littrell. Robin first guessed John Rzeznik, but now thinks Piglet is Nick Lachey. Ken thought Piglet was Adam Lambert, but is now guessing actor Jeremy Renner. Jenny puts on a massive wig, perhaps anticipating another Golden Ear win? Her first impression guess was Nick Lachey and she’s sticking with it! LeAnn agrees that the Piglet is definitely Nick Lachey. The singer finally pulls off his mask to reveal he is, indeed, Nick Lachey! Which means not only has he won a Golden Mask trophy, but Jenny wins her second consecutive Golden Ear trophy. What a season!