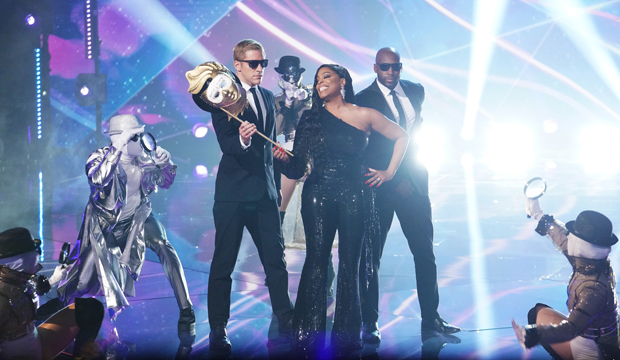 The fifth season of “The Masked Singer” has finally arrived, but there’s a noticeable casting change as Niecy Nash has temporarily replaced host Nick Cannon as he deals with Covid-19. This year features a roster of 10 all-new secret celebrities wearing extravagant costumes who’ve been divided into two groups. Up first is Group A, which consists of Raccoon, Robopine, Russian Dolls, Seashell and Snail. Each of them took the stage on Wednesday night in front of panelists Robin Thicke, Jenny McCarthy, Ken Jeong and Nicole Scherzinger. So who was the first contestant to be unmasked in front of America?

Below, read our minute-by-minute “The Masked Singer” recap of Season 5, Episode 1, titled “Return Of The Masks,” to find out what happened Wednesday, March 10 at 8:00 p.m. ET/PT. Then be sure to sound off in the comments section about your favorite costumed characters on Fox’s reality TV show and who you think has what it takes to win the entire competition.

SEE‘The Masked Dancer’ reveals for all seasons: Celebrities and costumes

8:00 p.m. — “Previously on ‘The Masked Singer’!” In the Season 4 finale, Sun ended up winning the Golden Mask trophy and removed her mask to reveal former child singer LeAnn Rimes. As for the other finalists, Mushroom (Aloe Blacc) was the runner-up and Crocodile (Nick Carter) came in third place. “This has been an overwhelming experience,” Rimes declared in her exit interview. But enough about last year — let’s get started with the first performance of Season 5!

8:11 p.m. — Niecy arrives to host tonight’s episode on a throne carried by four men in black. She introduces the panelists and then kicks things off with Group A’s first competitor, the Russian Dolls. Now let’s get right into the clues! The Russian Doll has been doing its own thing for quite some time, not like in the beginning when it was the world’s hottest toy. Those were the days, but it knew it wasn’t something to be toyed with, or a puppet. As much as they tried to put them in a box, they just didn’t fit. Meanwhile, shinier manufactured toys filled the shelves. Russian Doll was cast aside (we see the steering wheel of a boat) and it was the best thing ever! It turns out they can still sell out without being a total sellout.

Russian Doll takes the stage to sing “Man in the Mirror” and he has a fantastic voice but then reveals a smaller Russian Doll behind him with another voice! This duo sounds fantastic and definitely gave an entertaining performance despite their lack of mobility. Nicole has goosebumps all over and calls it “so creepy, but so magical.” Robin loved the blend of their vocals. After the panelists write down their first impression guesses they start to debate aloud. Jenny mentioned the clue about a Garden State Highway and a bench that said “Coming to a Country Near You.” The panel suggests all kinds of artists including Boyz II Men, Lady A, Vanessa Hudgens, Darren Criss, Matthew Morrison, Kevin McHale, Gwen Stefani & Tom Dumont.

8:20 p.m. — Up next they unleash the Snail! He has acted, directed, produced, recorded albums and graced the Oscar stage. He’s rubbed elbows with everyone from Robert De Niro to Lady Gaga to Michelle Obama. We see a Teddy Bear sitting at what looks like “The Tonight Show” stage. We see a pot of treasure and says he may be best known for noticing the talent around him, he wants to show harsh critics that have followed him his whole career that he can shine too. There were also clues about meatballs and a UFO thrown in.

Snail is singing “You Make My Dreams (Come True)” by Hall & Oates. He definitely sounds like an older singer and has a bit of a twang. He isn’t moving around much and almost sounds like Kermit the Frog when he sings. There’s not a lot of range in the Snail’s voice, but he can sing in key! Robin thought it was a fun song choice and he has a feeling they’re throwing their voice a little bit. Jenny agrees with me that he sounds like Kermit. After writing down their first impression guesses, the panel starts throwing out guesses for the cameras: Jay Leno, Seth MacFarlane, Mark Wahlberg, Jimmy Kimmel or Adam Sandler.

8:30 p.m. — The next competitor is the Seashell and she makes a very sultry entrance! When she was young she was pulled all around the world with her family. We see a hot dog before she says she found her peace by the shore. When her career took off it was like a massive tsunami of success, but much like her childhood she still drifted, wearing many hats. She often wonders if she found her true calling. That’s partly why she’s here! We see a cowboy hat and a witches broom before she admits she’s nervous because she hasn’t sang in a really long time.

On the stage Seashell is singing “Listen to Your Heart” by Roxette. Although she started off a bit nervous, Seashell can sing! She’s got a clear voice and sounds like she may have had a pop record in the past. Nicole thinks Seashell killed it and after their first impression guesses, the panel discusses who Seashell could be: Sarah Jessica Parker, Anne Hathaway, Kristin Chenoweth, Dakota Johnson, Renee Zellweger, Hillary Duff, Jessica Simpson or Jennifer Love Hewitt.

8:40 p.m. — The fourth singer tonight comes in the form of the Raccoon. He’s got a ton of energy as he struts onto the stage and Jenny mentions he has a bit of a “grandpa walk.” Raccoon says that sometimes to get the happy ending you have to go through hell first. We see him behind bars as he says in his worst days he faced death. Desperate to stay sane, he recited his favorite story, “The Hunchback of Notre Dame.” He says he was a monster that was locked away, but Raccoon made a promise to God that if he got a second chance in life he’d only do good. He’s still fulfilling that promise to this day.

Tonight Raccoon singing “Wild Thing” by The Troggs. This is one of the worst singers I think I’ve ever heard on this show. He’s just screaming and sounds like he has razor blades in his throat, but the panel encourages him to keep singing his heart out. This is so bad it’s actually a little funny. He committed! The panel thinks Raccoon could be Gary Busey, Nick Nolte, Sammy Hagar, Mike Tyson, Joe Pesci or Danny DeVito.

8:50 p.m. — The last performer tonight is the Porcupine. Oh I’m sorry, he corrected everyone that he goes by Robopine! He may look prickly, but don’t be scared. Where he came from he was forced to grow thick quills. He was left to fend for himself with nothing but a dream. He went on a mission to get on Hollywood’s radar. He used 411 day and night just to make a connection until a certain angel said “hello.” There are a lot of futuristic things happening in this clue package and an image of George Washington.

Robopine is singing “Never Too Much” by Luther Vandross and the thing can sing! He’s got a silky smooth voice and of course Jenny is already screaming Jamie Foxx. I personally think he sounds sort of like Tyrese. Whoever he is, Robopine is the one to beat in Group A. Robopine claims to be 60 years old with grandkids, but I think he’s lying. The panel thinks he could be Idris Elba, Donald Glover, Jamie Foxx, Lionel Richie or Ginuwine.

8:59 p.m. — The panel and audience at home have voted and the singer with the least amount of votes and unmasking tonight is the Snail. I’m sort of shocked that the Raccoon wasn’t first, but the Snail just didn’t have as much energy. Before we learn of the Snail’s true identity, we’ll the panel’s first impression guesses and see if they make any last minute changes. Robin guessed and stayed with Seth MacFarlane, Ken guessed and stuck with Jay Leno, Jenny guessed Adam Carolla but switched to Ted Cruz, Nicole also guessed Adam Carolla but switched to Billy Crystal. Are any of them right? The Snail slowly pulls off his mask and reveals himself to be Kermit the Frog! Oh, wow! That was actually sort of my guess but I never thought it could actually be true. What a way to kick off Season 5!