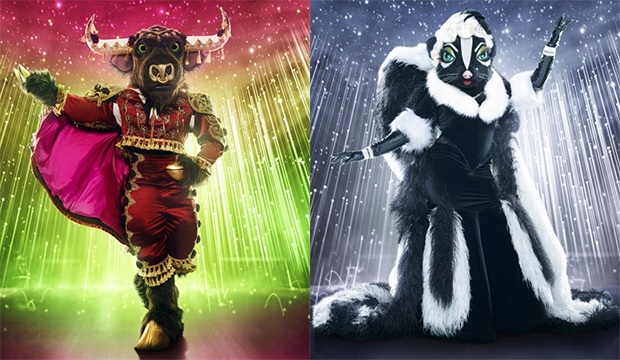 After months of competition, it was finally time for Group A to name a champion on “The Masked Singer.” Whoever prevailed at the end of Wednesday’s Group A Finale, either Bull or Skunk, would go on to compete for the Season 6 Golden Mask on December 15, where they’d face off against their Group B counterpart. So did Bull or Skunk fall victim to this week’s unmasking just one round before the season finale?

Below, read our minute-by-minute “The Masked Singer” recap of Season 6, Episode 11, to find out what happened Wednesday, December 1 at 8:00 p.m. ET/PT. Then be sure to sound off in the comments section about your favorite costumed characters on Fox’s reality TV show and who you think has what it takes to win the entire competition. Nick Cannon hosts the series and Robin Thicke, Jenny McCarthy, Ken Jeong and Nicole Scherzinger star as the panelists.

SEE ‘The Masked Singer’ judges get an ‘F’ for their Season 6 guesses — only 2 (!) correct out of 12 unmaskings

8:00 p.m. — “Previously on ‘The Masked Singer’!” In the 10th episode, the Group B contestants performed in the semi-finals. Banana Split and Queen of Hearts survived while Mallard and Caterpillar were eliminated. Mallard was unmasked as Willie Robertson, while Caterpillar was revealed to be Bobby Berk. Which Group A singer will be eliminated tonight?

8:05 p.m. — The panelists have taken their seats and Nick is ready to kick off this Group A finale. The winner will go head-to-head in the season finale against next week’s Group B winner. The Bull is up first. After years of chasing his destiny he got a big break. We see him step through a red door into a winter wonderland, facing a checkered racing flag. Bull thought his big break would change his life, but instead he changed himself because of what people around him were saying. We see a mermaid tail before he says that one day he woke up and realized that the qualities he was hiding were actually what gave him his super powers. When he was true to himself his success skyrocketed. Now he has the opportunity to inspire others who may not think they fit in with the herd. As you can see, he will never miss the chance to express himself again.

8:10 p.m. — For his solo performance, Bull is singing “Straight Up” by Paula Abdul. After spray painting some graffiti on a wall, he does a backwards fall into the arms of the men in black before getting back to his feet. He then goes into a full dance routine while simultaneously belting out some of the best notes we’ve heard all season. The Bull came to fight! This is probably the most complex performance I’ve ever seen on any season of “The Masked Singer,” so kudos to the Bull! Ken agrees, calling it “the most entertaining performance we’ve ever had on the show.” Jenny can’t believe what he is capable of inside that costume. Nicole says “Masked Singer” has never even played in this league. Now, Nick announces to make things easier for the panel, he will rule out one name that has been on the tip of their tongues this season. Bull confirms that he has not been in the musical “Hamilton,” yet! But he has performed in the same venue where “Hamilton” had its Broadway debut. Ken now seems to think this could be “Modern Family” star Jesse Tyler Ferguson. Jenny noticed the LGBTQ+ clues and thinks the racing flag stands for “Drag Race.” This leads to her guess of Adam Lambert. Robin notes that the list of possibilities is getting shorter and shorter because of Bull’s acrobatic capabilities. Nicole mentions Jaden Smith and Broadway star Jeremy Pope. To that, Bull responds, “Nicole, we could be Beauty and the Beast but you playin’ games.”

8:20 p.m. — After seeing Bull’s performance, Skunk admits the stakes have been raised for her. The Skunk character has inspired her to not hold back so tonight she’s going to crush it. She wants to win. Throughout Skunk’s career just as many people have been inspired by her person as by her music. We see golden locks of hair and the Statue of Liberty among the clues in her package. One time she was at church with her good friend Whitney Houston and there was a young lady who was crying. The skunk assumed the woman was crying because she saw Whitney, but the woman told Skunk that her song had gotten her though a tough time. It made Skunk realize that the actions and the hardships she has been through didn’t just make her stronger, they helped other people too. We also saw a jar of hot sauce and a sign for the “Presidential Suite” among the clues.

8:25 p.m. — For her solo performance tonight, Skunk is singing “I Never Loved a Man (The Way I Love You” by the Queen of Soul, Aretha Franklin. Her voice gives me chills. It’s absolute FIRE and this is easily the best vocal performance of the season, if not ever on this show. Jenny has chills all over her body and screams, “Holy cow!” She continues by saying Skunk could be the next winner of “Masked Singer.” Robin says Skunk left every single note in her body on that stage. So, which celebrity is the skunk NOT? She is definitely not Jill Scott. The Skunk does admit she has performed with Jill a few times in the past. Ken believes the Skunk is definitely one of Whitney’s old friends, Mary J. Blige. Jenny notes that Whitney played the fairy godmother in “Cinderella” to Brandy, so that’s her guess. This Whitney clue really got their wheels spinning. Robin is certain this is Whitney’s former neighbor, Faith Evans.

8:35 p.m. — The Bull is up again to perform a duet with the Season 3 runner-up, Turtle, also known as Jesse McCartney. The fact that Bull is so close to the end of this competition is mindboggling to him. He is a person who has never really believed in his voice. When he first saw the Bull, he was not 100% sold on it. It didn’t feel like it resonated with who he is. But with every round he has discovered what he has in common with the Bull, he’s tough, romantic and a fighter. Bull has learned that in order to find out who you are you have to forget everything you already think you know. This week he has been learning a duet with Turtle himself, Jesse McCartney. Jesse’s first impression of Bull was, “This guy can really, really sing. I have no idea who he is.” Bull is ready to hit the stage and earn his spot in the finale.

8:40 p.m. — For his duet, Bull is singing “Breakeven (Falling to Pieces)” by The Script. The duet works nicely and their voices match up well. They even have some good harmonies mixed in! Ken says this duet made his day, just to see Jesse return and sing alongside Bull. Robin agrees that it’s nice to see Jesse’s handsome smile again. Jesse he says he doesn’t know who the Bull is, but it’s not his first rodeo.

8:45 p.m. — It’s time for Skunk to hit the stage for her duet with legendary Grammy winner Michael Bolton. It’s been a while since Skunk has done anything like this. Her focus lately has been on her family, especially her youngest son. He’s unique and faces challenges that others may not. Getting to see the world through his eyes gave Skunk the courage to compete on this show. Throughout this process she has been reminded that she can be a badass mom and a performer. Skunk has had such a great time performing again and she’s not ready for it to end tonight. She’s excited to sing a duet with Michael, but he says the chemistry is challenging because he can’t see her or make eye contact. Little does Michael know, this isn’t the first time he’s sang with Skunk. That makes her a little more confident.

8:50 p.m. — For their duet, Skunk and Michael are singing “Ain’t No Mountain High Enough” by Marvin Gaye & Tammi Terrell. These two vocal powerhouses slay the song. Jenny calls it “insane” while Nicole mentions this being a “classic performance” and that it’s an honor to have Michael on the stage. Robin says Skunk has been his favorite singer all season and Michael says she is a pleasure to sing with. Even after being told they have sang together before, Michael has no idea who she is.

8:55 p.m. — The votes have been counted and it’s time to announce the winner of the Group A finale. Nick says it is one of the closest votes in “Masked Singer” history and the panel is devastated to lose one of them. But all good things must come to an end. The winner of Group A is Bull! He is absolutely thrilled. It’s time to reveal the panel’s first impression guesses for Skunk. Ken thought it was Anita Baker, but now says she’s Mary J. Blige. Jenny thought it was Gloria Gaynor or Roberta Flack, but now she’s agreeing with Ken that this is Mary J. Blige. Nicole initially guessed Fantasia, Deborah Cox and Mary J. Blige. Now she is confident it’s Faith Evans. Robin’s first impression was Faith Evans and he’s sticking with it. The Skunk finally pulls her mask off to reveal Faith Evans! And Robin officially gets a point towards the Golden Ear trophy. Who will Bull face in the grand finale? We will find out next week when Queen of Hearts faces off against Banana Split.