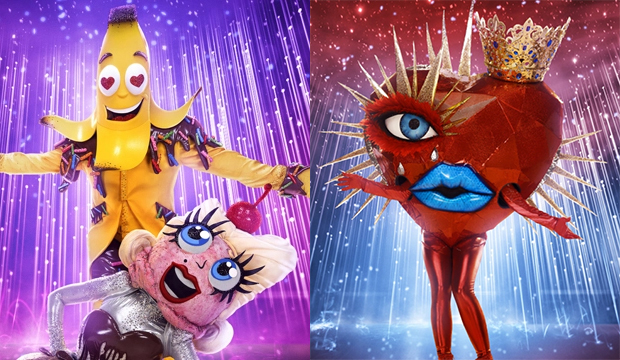 After months of wild and wacky performances, it was finally time for Group B to name a champion on “The Masked Singer.” Whoever prevailed at the end of Wednesday’s Group B Finale, either Banana Split or Queen of Hearts, would go on to compete for the Season 6 Golden Mask on December 15, where they’d face off against the Group A victor, Bull. So did Banana Split or Queen of Hearts fall victim to this week’s unmasking just one week before the season finale?

Below, read our minute-by-minute “The Masked Singer” recap of Season 6, Episode 12, to find out what happened Wednesday, December 8 at 8:00 p.m. ET/PT. Then be sure to sound off in the comments section about your favorite costumed characters on Fox’s reality TV show and who you think has what it takes to win the entire competition. Nick Cannon hosts the series and Robin Thicke, Jenny McCarthy, Ken Jeong and Nicole Scherzinger star as the panelists.

SEE ‘The Masked Singer’ judges get an ‘F’ for their Season 6 guesses — only 2 (!) correct out of 12 unmaskings

8:00 p.m. — “Previously on ‘The Masked Singer’!” In the 11th episode, the two remaining Group A finalists performed for America’s votes. Bull earned a spot in the grand finale while Skunk was eliminated. The smelly rodent then removed her mask to reveal music legend Faith Evans. Which Group B singer will be eliminated tonight?

8:05 p.m. — The Group B finals will begin with Banana Split and this is what they have to say in their clue package: It’s almost impossible not to hear the things people say about you. In the world that we live in, it’s kind of everywhere. Throughout that statement we see a drive-in movie theater. People say Banana is fame-obsessed like he’s an ego-maniac. Ice Cream has people say she’s not very bright, but at least she’s pretty. We see more movie clues with a movie poster reading, “Brain Freeze: We All Scream for Ice Cream” and there’s an image of a shark fin in the water. At the bottom of the poster it says, “A Rich Summer Film.” Another sign at the concession stand reads: “Popcorn – $5, Soda – $5, Rotten Banana – 47 cents.” When they’re performing they shut out the noise and the static is gone. The license plate on their car is from Illinois and makes a reference to the windy city, Chicago. Together, Banana Split knows they can get through any kind of storm.

8:12 p.m. — Tonight Banana Split is performing “Singin’ in the Rain” by Arthur Freed. Banana conducts an orchestra while Ice Cream serenades us. She has a beautiful voice and this is quite a theatrical performance, but I don’t know if it packs the punch needed to win this. But just as I typed that, Ice Cream steps up her game and begins to tap dance! Nicole says Ice Creams vocals sound like a record every week. Ken says the Banana is one of his favorite characters in “Masked Singer” history. Tonight Nick will fire t-shirts at the panel with one-word clues about how each performer is connected to one of the panelists. The shirt fired out for Banana Split says “Garden” and Banana says, “Nicole, I love when you plant a little seed, and then you watch it grow and do great things over the years.” That brings Nicole to tears and she says she got her start on a show called “Pop Stars” and she had a very famous producer named David Foster who mentored her. Just recently he produced Nicole with Andrea Bocelli and they performed at Madison Square Garden. It all makes sense! The panel is now pretty convinced that this is David Foster and his wife, singer Katharine McPhee. But Robin disagrees! He says his uncle David would never come on a show dressed like a banana. He still thinks this could be Ryan Tedder & Leona Lewis. Jenny throws out the possibility of Jeff & Emily Goldblum.

8:21 p.m. — Up next is Queen of Hearts. Her entire life she wanted to have a sense of community. She found it in some really unusual and unexpected places. There was definitely a time in her life when she was living like an animal. We see Queen of Hearts out in the woods when she says her primary concerns were where to get food and where to get shelter that was safe. One time she was walking down the street and she was really losing hope. A man passed by who looked at her and handed her a $5 bill (we see a rainbow shoot across the screen). Knowing that he wanted her to eat that night meant the world. As Queen of Hearts sit down for a tea party she says she has gotten to see life from both sides now: real poor and real wealthy. Queen of Hearts still believes the poorest people are the most generous.

8:26 p.m. — Tonight Queen of Hearts is singing “Bird Set Free” by Sia. It’s such an odd, beautifully weird choice of song and she’s absolutely killing the vocals. Nicole is practically hyperventilating. This got a huge response from the audience. Nicole says, “All hail the queen!” It’s one of her favorite performances ever on the show. Ken says they are honored to be in her presence. Nick’s cannon shoots out a shirt to Ken that says “Wrestle” with a heart on it. Queen of Hearts says, like Ken, she’s not afraid to get in the ring and get a little bit dirty. This leads Ken to guess Christina Aguilera. Nicole saw a red devil in the clue package and names KT Tunstall, who sang the theme song in “Devil Wears Prada.” But she really thinks this is Jewel.

8:32 p.m. — Banana says most of his success has been within the same four walls and he’s been itching to branch out. This experience has been exhilarating. Ice Cream says as each performance goes by her mind just starts rolling and thinking about how to be more creative. Creativity is off the charts. Ice Cream learned that she loves to be silly. Banana is always surprised when a crowd responds and perhaps that’s why he has had such a long career. He gives Ice Cream credit for doing all the work on stage.

8:36 p.m. — Now Banana Split is singing a duet with Robin, “Don’t You Worry ‘Bout a Thing” by Stevie Wonder. Robin’s voice blends brilliantly with Ice Cream’s and this is a fun, feel-good tune. It’s a little awkward though because Robin is still behind the panelist desk. They’re not actually sharing the stage. For a final celebration, Ice Cream does the splits on stage! Ken calls it another pitch-perfect performance from Banana Split. Robin says Ice Cream has unlimited range and colors to her voice.

8:45 p.m. — Queen of Hearts is so grateful that she said yes to this experience. The fact that she said yes might surprise some people because she’s been known to turn down big opportunities with big price tags. She doesn’t like to brag about herself, but she feels really good about what she’s been doing here. It has taught her that she has to keep pushing. Only one performance stands between her taking on the Bull in the grand finale.

8:48 p.m. — Now Queen of Hearts is singing a duet with Nicole, “Dream On” by Aerosmith. What a cool song choice! They belt out the rock ballad at the top of their lungs and I’m happy to see that, although Nicole isn’t on stage next to Queen of Hearts, at least she’s not behind her desk. Jenny is blown away and says she’s honored to be part of this show. Nicole learned that Queen of Hearts is a natural and all heart and soul.