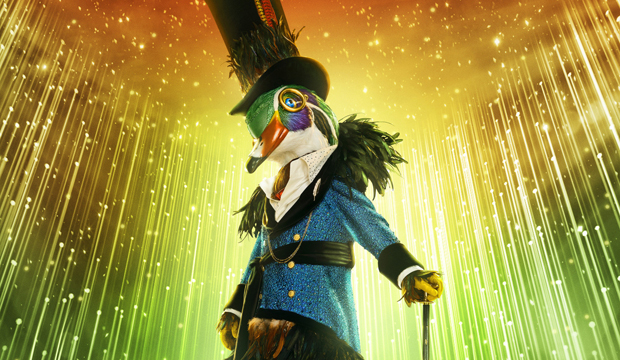 The final wildcard of “The Masked Singer” Season 6, Beach Ball, took the stage on Wednesday night, joining fellow Group B contestants Mallard, Caterpillar, Banana Split and Queen of Hearts. One by one, this colorful collection sang their hearts out, with one celebrity losing the audience vote and having to unmask at the end of the episode. So how did it all play out during the “Giving Thanks” episode?

Below, read our minute-by-minute “The Masked Singer” recap of Season 6, Episode 8, to find out what happened Wednesday, November 3 at 8:00 p.m. ET/PT. Then be sure to sound off in the comments section about your favorite costumed characters on Fox’s reality TV show and who you think has what it takes to win the entire competition. Robin Thicke, Jenny McCarthy, Ken Jeong and Nicole Scherzinger star as the panelists.

8:00 p.m. — “Previously on ‘The Masked Singer’!” In the seventh episode, the show took a break from the competition in order to unveil the Top 10 best performances of all time. Now that the World Series is over, “TMS” is back in fighting mode and someone will be unmasked tonight by host Nick Cannon. Who will it be? Let’s go!

8:05 p.m. — It’s officially November and the Group B contestants are ready to start giving thanks. Joel McHale returns as a guest panelist to help dissect the clues. First up in this musical buffet is Mallard. One thing this duck is thankful for is family. In fact, he rose to fame as part of a pretty famous one. After holding up an Allen wrench, cameras zoom in on a photograph of Abraham Lincoln as Mallard says, “Sometimes, family has its challenges.” He has gotten scrutiny over stuff his family members said, but no matter how much they disagree they still get together at the end of the day for supper. A killer whale is seen served up in a bowl as Mallard reminds us that there are probably more things we have in common than we have differences. His performance tonight is by someone he considers family, Luke Bryan. Years ago Luke asked him to hop on stage and sing it with him, but Mallard didn’t know the words. This performance is all about redemption.

8:10 p.m. — Mallard is singing “Play Something Country” by Brooks & Dunn on a wild honkytonk stage. I know the panelists have been adamant that this is some big country star, but his voice isn’t that spectacular. He’s okay, but I have serious doubts Mallard is a professional singer. Following his performance, a turkey drops down to give a one-word clue about the Mallard’s identity. His clue is “crown.” Jenny thinks Mallard is singer Billy Ray Cyrus. Robin says it could be actor Kiefer Sutherland. Nicole thinks it would be so fun if Mallard is Jack Osbourne, but it could also be John Rich. Next, a video message from his “bestie,” Chris Pratt appears. Chris says a while ago he and Mallard went out catching frogs. Chris is covered in mud and asks if there is any chance Mallard could send someone to the swamp to pick him up.

8:17 p.m. — Next up is Caterpillar. He didn’t know his whole family growing up, so when he became a telemarketer it kind of gave him an excuse to call them. He would call over and over, but he was scared to tell them who he really was. When he finally told them, they wanted to connect! We see a butterfly emerging from a beanbag to water plants as Caterpillar admits he had a lot of apprehension about meeting his family. He didn’t think they would want to get to know the real him. To his surprise, Caterpillar’s family accepted him with open arms. We see the butterfly, who is wearing an eye patch, give Caterpillar a hug. For that, Caterpillar is thankful. His biggest challenge each week is singing the correct words.

8:25 p.m. — Caterpillar is singing “It’s Gonna Be Me” by NSYNC. Now this definitely sounds like a professional singer with experience on the stage. This character is adorable, but the massive size of his body doesn’t make it easy to work the stage. Definite boyband vibes from this contestant. His one-word clue from the turkey is “pop.” Ken believes this Caterpillar is a popstar that was adopted. As soon as he mentions this, Jenny begins hopping around screaming, “I know who it is! Where’s that button?” With the button placed in front of her, the other panelists beg her not to push it while the audience screams, “Push it, push it!” But it’s all a false alarm and Jenny backs off and declines to push the button. Boo! Jenny thinks this is JC Chasez. Robin was drawn to the beanbag clue and thinks the initials “BB” could stand for Backstreet Boy AJ McLean. Nicole mentions Lance Bass.

8:28 p.m. — Tonight’s third performer is Queen of Hearts. One thing that she has learned in her life is the power of words. When she was discovered the press wasn’t kind to her. We see the words “stupid,” “simplistic,” “untalented” and “chubby” as Queen of Hearts remembers people telling her what she should and shouldn’t wear and how she should look. As the camera focuses on a cowboy hat we hear Queen of Hearts say she didn’t listen to the press and she’s always written her own story. As she picks up a card that says “With Love,” Queen of Hearts says she is thankful for her experiences and hopes she made it easier for other people to follow.

8:35 p.m. — Queen of Hearts is singing “River” by Bishop Briggs and starts out with a beautiful acapella opening. She then moves from sultry to a rock edge as she belts out this modern hit. This is powerful! Jenny calls her the greatest artist they’ve ever had on “Masked Singer,” ever! Queen of Hearts’ one-word clue tonight is “home.” Jenny thinks this could be Kacey Musgraves. Robin mentions Jessica Simpson. Nicole wonders if it could be an Oscar-winning actresses Jennifer Lawrence or Marion Cotillard, but eventually decides it’s Grammy-winning singer Jewel. I think Nicole could be on to something! Miss Maskie appears alongside a black crow and says it’s an extra clue about who the Queen of Hearts is.

8:40 p.m. — Banana Split is next and they are thankful to be doing this together. We see a water tower with the word “Splitsville” on it as they talk about how much fun they’re having. An old television set shows the Ice Cream vacuuming in what looks like an old sit-com set. She says last time they worked together was a nightmare and the camera zooms in on a cockroach. Ice Cream says Banana doesn’t want to learn anything. To their surprise, people love how they work together. Banana holds up a newspaper featuring Jenny that reads, “Has the Golden Ear Winner Lost Her Mind?” This is the same newspaper Skunk was reading a few weeks back. Hmmm.

8:45 p.m. — Tonight Banana Split is singing “Let ‘Er Rip” by The Chicks. Banana’s piano is disguised as a car and the sultry Ice Cream is singing her heart out with pitch perfect precision. This is a fun country twist on what they’ve been doing previously. As usual, they nail this performance. Their one-word clue from the turkey is “Director.” Nicole says this duo is Sutton Foster and Hugh Jackman. Jenny thinks it could be actor Jeff Goldblum with his wife, Emilie Livingston. Finally, Robin says it might be Hollywood couple Kevin Bacon and Kyra Sedgwick. Joel chimes in at the last minute to say he thinks this couple is actually friendly former co-stars, Zooey Deschanel and Lamorne Morris.

8:50 p.m. — It’s time for the final wildcard to enter the competition. Say hello to Beach Ball! Coming in as the wildcard definitely makes sense because Beach Ball’s whole life has definitely been wild. They were thrown into the game at a very early age and in the spotlight for a very long time. They have famous recipes and even a hit single they recorded in just one take. Best of all, Beach Ball has done it all with their biggest supporter right by their side. We see a peach and a train track crossing while Beach Ball explains their biggest supporter and them recently went their separate ways. They would call out for them, and they just weren’t there. When they found out Beach Ball was doing the show, the pair reconnected. Their biggest supporter will always have their back, so Beach Ball is truly thankful for that.

8:55 p.m. — Beach Ball is singing “Party in the USA” by Miley Cyrus. After the opening line, Beach Ball turns around to show everyone it’s actually two-faced and it sounds like two singers inside. Also, they’re both terrible singers. I don’t think we’ve heard a performance this off key all season, lol. I love them for this. Robin suggests sisters and actresses Dakota & Elle Fanning or “2 Broke Girls” stars Kat Dennings & Beth Behrs. Ken mentions Kim & Khloe Kardashian, but Robin gets more of a Kendall & Kylie Jenner vibe.

8:59 p.m. — It’s been a fun, wild night but now it’s time to get serious. Somebody must leave the competition. The studio audience votes for their favorite and the singer heading home tonight is Beach Ball. It’s sad we only got one performance out of this bouncy toy, but they were pretty awful singers. Before Beach Ball is revealed, we see the first impression guesses from the panel. Ken said Kim & Khloe Kardashian and sticks with it. Jenny thinks it’s Kim Zolciak & Erika Jayne, but she changes her mind to “Jersey Shore” stars Snooki & JWoww. Joel agrees with Jenny’s suggestion of Snooki & JWoww. Nicole says it is Kristen Wiig & Annie Mumolo. Last but not least, Robin thinks Beach Ball is Kat Dennings & Beth Behrs. At last, the Beach Ball is opened up to reveal reality superstars reality superstars Honey Boo Boo and Mama June!