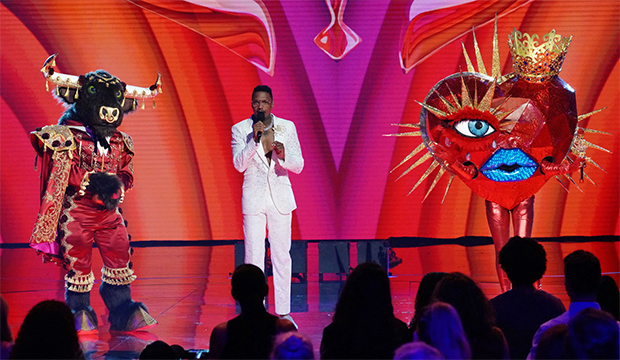 For the first time ever, only two contestants competed in “The Masked Singer” finale, down from three in all of the previous seasons. Bull (the winner of Group A) and Queen of Hearts (the winner of Group B) went head-to-head on the big stage for the very first time, but only one celeb came out victorious and took home the Golden Mask. So who ended up following in the footsteps of former winners T-Pain (Monster), Wayne Brady (Fox), Kandi Burruss (Night Angel), LeAnn Rimes (Sun) and Nick Lachey (Piglet)? And which panelist won the Golden Ear trophy?

Below, read our minute-by-minute “The Masked Singer” recap of the Season 6 finale to find out what happened Wednesday, December 14 at 9:00 p.m. ET/PT. Then be sure to sound off in the comments section about your favorite costumed characters on Fox’s reality TV show and what you think of the latest addition to the winners list. Nick Cannon hosts the series and Robin Thicke, Jenny McCarthy, Ken Jeong and Nicole Scherzinger star as the panelists.

9:00 p.m. — “Previously on ‘The Masked Singer’!” In the 12th episode, the two remaining Group B finalists performed for America’s votes. Queen of Hearts earned a spot in the grand finale while Banana Split was eliminated. The banana and ice cream then removed their masks to reveal married couple David Foster and Katherine McPhee. Who will win the Golden Mask tonight? Let’s find out!

9:02 p.m. — Nick introduces Bull and Queen of Hearts to the stage and announces they will each sing two songs tonight. One will be a stripped-down acoustic number and the other will be an all-out showstopper.

9:04 p.m. — First up is Bull. When he was younger he always felt like he was playing a character. As a football is thrown at the Bull, he says boys are supposed to play sports and he tried. Boys aren’t supposed to let their emotions show, so he tried that too. Then, as the camera zooms in on tap shoes, Bull says that he secretly always knew he was someone else. When there’s no role models like you it can make you feel invisible. It took him a long time to find the people who saw him for who he truly is. That changed everything. Now his focus is to help others who are looking for their place. A man with a cake greets Bull as he says he appreciates the patience people have had with him. He hasn’t always said the right things or done things perfectly, but he’s always marched towards a better future for all. He promised himself to always be bold, strong and celebrate exactly who he is.

9:08 p.m. — For his first performance, Bull is singing “You Gotta Be” by Des’ree. He starts off nice and easy before taking the audience to church with crazy riffs and runs. He even does another split on stage to remind people of his dancing capabilities. This is a fun performance that has the crowd going wild. Robin said Bull “completely shocked and awed us.” Jenny thinks Bull could be Tituss Burgess or Neil Patrick Harris. Ken calls out Taye Diggs. Nicole says she has known since Day 1 who this is, but she won’t reveal it yet. She wants that Golden Ear trophy!

9:13 p.m. — Queen of Hearts will now have to respond to Bull slaying the stage. When she was just a teenager she wrote a letter to her grandma. It read, “Dear Grandma, What’s new? Well, I quit my job, and I moved out. People like my music, things are happenin’ and I’m ready for it all. Love, Heart.” As we see some ruby red slippers, Queen of Hearts says the truth is that she left her job because she had no choice. She also had no place to live. Her car was stolen too! People did love her music though, all three of them that came to her show. She still has that letter today and hopes her grandma will be proud. Sometimes, the single greatest act of defiance is shining your light no matter what the world tells you.

9:20 p.m. — For her first performance, Queen of Hearts is singing an acoustic version of “What’s Going On” by Marvin Gaye. She sounds beautiful and creates a version of this classic all her own. She has such a unique tone. Ken says this is an amazing way to end the season because all season long Queen of Hearts has made each song her own. Queen of Hearts says she loves love songs to humanity and that’s what this song represents to her. Nicole thinks this is Jewel. Jenny isn’t sure but she’s going with Kellie Pickler. Ken says it could be Miranda Lambert.

9:30 p.m. — Bull’s final performance is a stripped-down version of “Invisible” by Hunter Hayes. Prior to singing, Bull said he can hardly even listen to this song without crying. It’s a beautiful message and Bull is killing it vocally. Nicole is sobbing. She says we’ve all felt invisible at some point and she’s rooting for him to take home the Golden Mask trophy. Bull says every single lyric spoke to him and then he breaks down himself before saying, “I do this because I love this. I’ve been doing it since I was eight years old.” Bull says this show has changed his life and he feels more confident than he ever has.

9:40 p.m. — The final performance from Queen of Hearts is “Firework” by Katy Perry. The song starts quietly and builds gradually until there is an all-out dance party on stage. This song really allowed Queen of Hearts to show how powerful her range can be. Jenny says Queen of Hearts is a firework and the Season 6 winner as far as Jenny is concerned. Queen of Hearts hopes that she has been able to be a spark of inspiration for anybody who might be struggling in the darkness.

9:50 p.m. — It’s time to find out who the winner is. Then the runner-up will be unmasked. The panel, studio audience and superfans at home vote for their favorite. Nick then announces that the winner of this season’s Golden Mask is Queen of Hearts! She is excited to be crowned the champion, but before we see who she is, Bull must be unmasked. Robin says Bull could have been a winner or finalist on any season and pleads with him to never stop doing what he loves. Then Nick pulls out the panel’s first impression guesses. Robin’s first guess was Lil Uzi Vert, but now he says Sisqo. Ken’s first impression guess was Ne-Yo, but now he says Taye Diggs. Jenny’s first impression was Brian Littrell, but now she thinks Bull is Adam Lambert. Nicole has always believed this is Todrick Hall and she’s not budging. The Bull pulls off his mask and reveals that he is, indeed, Todrick Hall! That earns Nicole one point towards the Golden Ear trophy.

9:59 p.m. — Now it’s time to unmask the Golden Mask trophy winner, Queen of Hearts. But first, let’s see if the panelists know who she is! Jenny’s first impression guess was Fergie, but now she says it’s Jewel. Robin originally said Idina Menzel, but he’s also convinced it’s Jewel. Ken first thought this was Renee Zellweger and he’s sticking with it! Nicole’s first impression was Carrie Underwood, but she also knows this must be Jewel. At last Queen of Hearts reveals her famous face and it is Grammy-nominated and multiplatinum superstar Jewel! She becomes the winner of the Season 6 Golden Mask. And Nicole is officially the winner of the Season 6 Golden Ear trophy. Jewel now joins T-Pain, Wayne Brady, Kandi Burruss, LeAnn Rimes and Nick Lachey in “The Masked Singer” hall of fame.