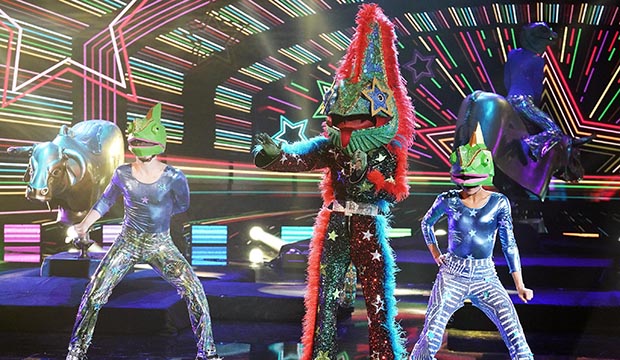 Episode 4 of “The Masked Singer” on the last day of March once again featured the four celebrities disguised as Black Swan, Chameleon, Grandpa Monster and Piglet. These contestants survived their initial appearances on the second episode of season 5, which aired on March 17. The fifth member of Group B, the Phoenix, performed “Tik Tok” by Kesha. She lost the vote and was revealed to be Caitlyn Jenner.

We’ve watched those first performances of the remaining quartet in Group B and have all of “The Masked Singer” spoilers for season 5, including the identity of the Chameleon who rocked the house with his cover of “Ride Wit Me” by Nelly. Keep reading if you want to know the real name of the Chameleon.

The Chameleon is rapper Wiz Khalifa. Don’t believe us. Just consider all the ways that the clues about Chameleon fit in with Wiz’s bio.

The made-up word “Camoflag” on the license plate is a shout-out to Wiz’s dad, who served in the army for years. The Chameleon revealed that his “pops taught him to keep up with the times.” Khalifa has often said that he found his father’s guidance to be invaluable over the years.

Wiz grew up in Pittsburgh, which is referenced in the sign that read “Beware of Pit.” His hometown honored him with his own day back in 2012.

The numbers 2 and 3 are shown on dice hanging off that hog of a motorcycle; Khalifa had a big hit back in 2013 when he recorded “23” with Miley Cyrus and Juicy J.

Cluedle-Doo told us that the Chameleon has a connection to precious gemstones. Khalifa had one of the biggest hits of his career for his collaboration with Charlie Puth on the tune “See You Again.” It moved a staggering 11 million copies and earned the coveted diamond status from the Recording Industry Association of America (RIAA).

That song also earned the duo three Grammy nominations. In total, Wiz has contended for music’s highest honor a whopping 10 times; as a group, this season’s “The Masked Singer” contestants have earned 26 nominations.

He accounts for all nine multi-platinum singles from this season’s competitors on “The Masked Singer.” Among Khalifa’s extensive discography, are three platinum and two gold discs. Collectively, this season’s contenders for the Golden Mask have 25 gold and platinum records.

The Chameleon rides a motorcycle as he declares he keeps the “tech” in “technicolor.” Wiz has often spoken of his love of all things technological. The Chameleon admits that when his singing career stalled, he turned to his tech-savvy skills to change the game; Wiz has made lots of green from sales of his hugely popular app “Weed Farm.”

We won’t know if we are right that Chameleon is Wiz Khalifa till he loses a vote or wins the show. Do you think we nailed the true identity of Chameleon? Sound off in the comments section with your best guesses.